Few weeks ago I got a message from Strategic Public Relation Group’s (SPRG) associate in Singapore for an opportunity to try out a Korean celebrity chef, Edward Kwon’s exclusive recipes that hasn’t been published on his television show. I’m always excited to try out anything new. I had known little about Chef Edward Kwon , so I decided to read up about him. Quoting from the litvchannel, Edward Kwon was born in Korea 1971, Kwon worked as an intern at the Ritz-Carlton Hotel in Seoul 1995, and then went on to work for the Ritz Carlton in San Francisco in 2001. Upon his return to Korea, he was part of the opening team at the W Hotel Seoul as their Executive Sous Chef.

Chef Edward Kown has honed his skills through international travels and working in different countries, including China and Middles East. His recent show Edventures in Asia presents an opportunity for the viewer to delve deeper into Asia’s colourful culture through its cuisine as Chef Ed dissects ingredients and innovates new fusion dishes that represents Asia’s taste as a whole.Reading all that, of course I couldn’t wait to try out his recipes. I love fusion cuisine and he is an impressive chef who loves to create gastronomic food by fusing Korean with other Asian food. So, I decided to give Sous Vide Chicken with apple chutney, orange pommery cream and balsamic vinegar reduction a try.

You probably will ask, what is Sous Vide ? Sous Vide is basically a cooking method originated from France by placing the meat inside a vacuum-sealed bag and cook in a water bath on low heat for several hours. This cooking method results in a very tender and juicy meat. Sous Vide cooking method has been adopted widely by gourmet restaurants throughout the world. This was my first time cooking Sous Vide and I love how it turned out.

When I presented my husband with the whole dish and asked him how it was, I didn’t get much answer other than “uhmm…..yummm….ohh…yummm. It’s a keeper” So, this dish is definitely a success. The chicken is incredibly tender, juicy and flavorful. Pair it with the delicious apple chutney, the orange pommery sauce and the balsamic vinegar reduction…boyyy!!! it’s one bombastic meal!!! I love how all the different elements work together without overwhelming one another. This is seriously a very tasty and pretty easy gourmet meal to prepare, just need to plan ahead. I adapted the recipe slightly to make it more household “friendly”. 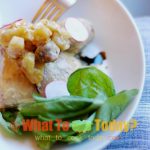 QUAIL WITH BACON AND HONEY