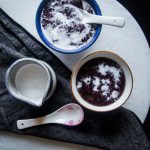 Learn how to make black sticky rice porridge/ bubur ketan hitam (bubur injin )conveniently with a pressure cooker without having to soak the glutinous rice. So creamy, gooey, and delicious with a simple tip to make it cooks faster too. Instruction for cooking on the stove and rice cooker are included too. 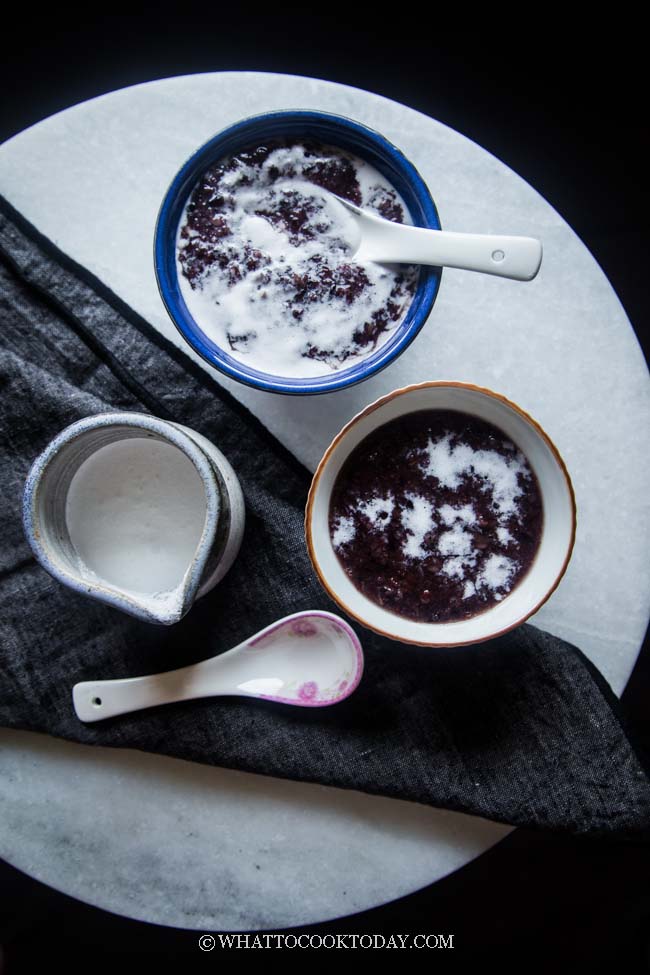 Bubur ketan hitam is also known as bubur pulut hitam or bubur injin in Bali. Ketan or Pulut means glutinous rice. Hitam means black and so the English translation black glutinous rice. Black glutinous rice is one of the popular ingredients used in the dessert in Southeast Asia such as: kue koci gula kelapa and Coconut Black Sticky Rice with White Chocolate Mousse I made a while ago. 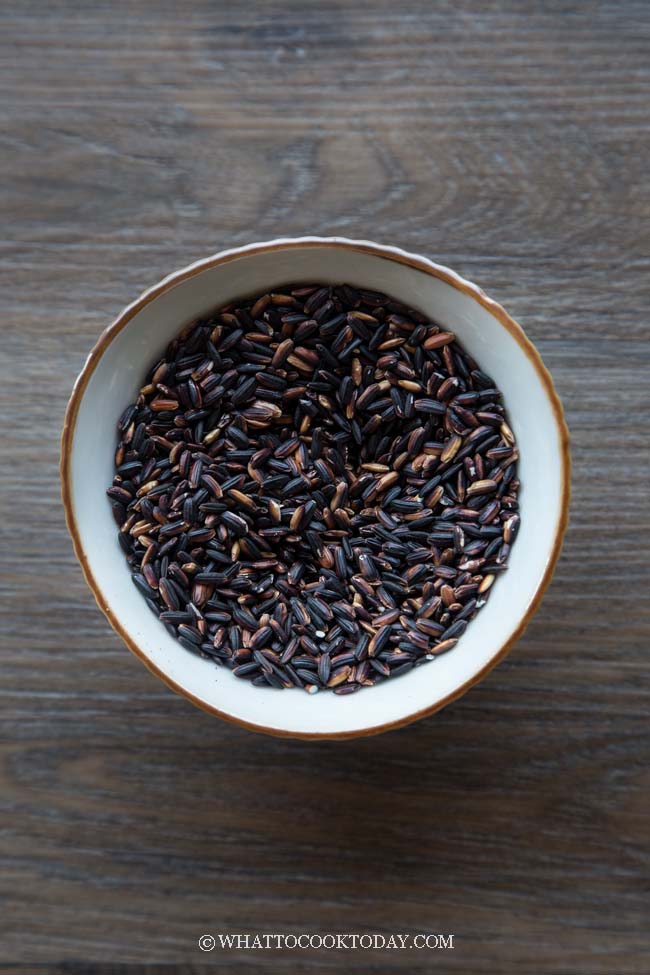 Black glutinous rice is unprocessed and it is high in fiber. As we know fiber helps to lower blood cholesterol and improve blood sugar level.

Because it is unprocessed, it retains vitamins and minerals, and also high in anthocyanin, a pigment that gives is purplish hue color after cooking.

Making bubur ketan hitam is never a complicated business. All you need are black glutinous rice, sugar, coconut milk, and pandan leaves if you have some.

2. NO SOAKING REQUIRED FOR PRESSURE COOKER

I love making bubur ketan with pressure cooker. The cooking time is not necessarily short, but I like that I don’t have to stir or add water (like the case in boiling on stove-top). It’s convenient. 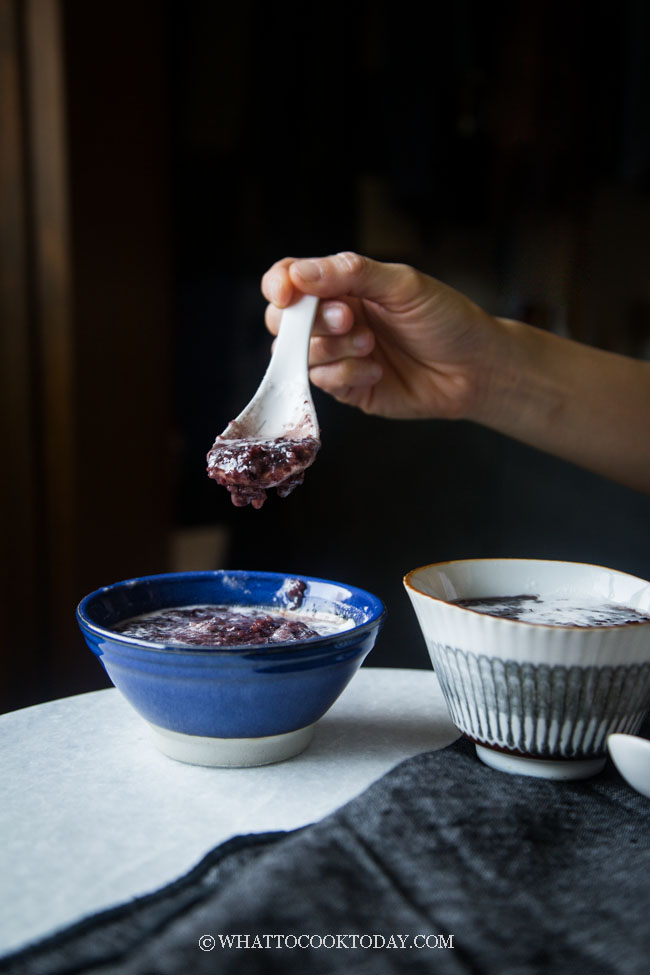 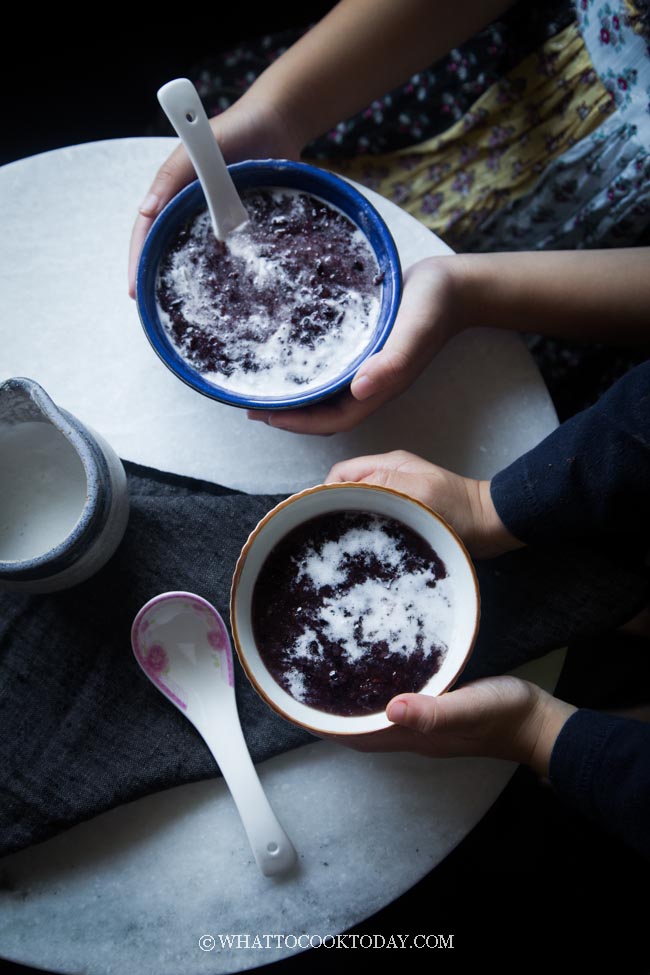 VARIETIES YOU CAN DO WITH BUBUR KETAN HITAM

You can add the following beans to bubur ketan:
1. Mung beans
2. Red beans/adzuki beans
You can do half half: 100 gr beans and 100 gr black glutinous rice. If cooking on stove top, just soak the beans together with the rice and then cook them together after that. No soaking is required if cooking with pressure cooker. 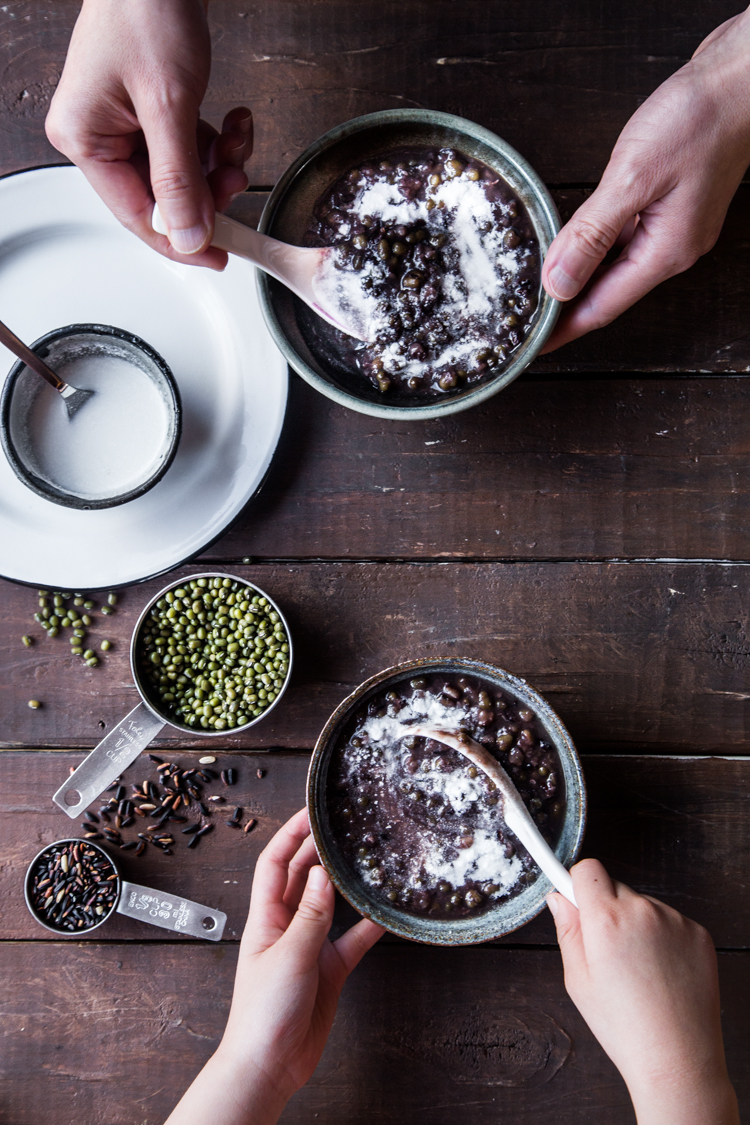 Don’t underestimate the humble look of bubur ketan hitam. There is nothing fancy about its look. This dessert is loved by many in Southeast Asia, including me. Bubur ketan hitam is so soft, gooey, and topped with that slightly salty coconut cream and I’m willing to go into a food coma for this! No kidding! 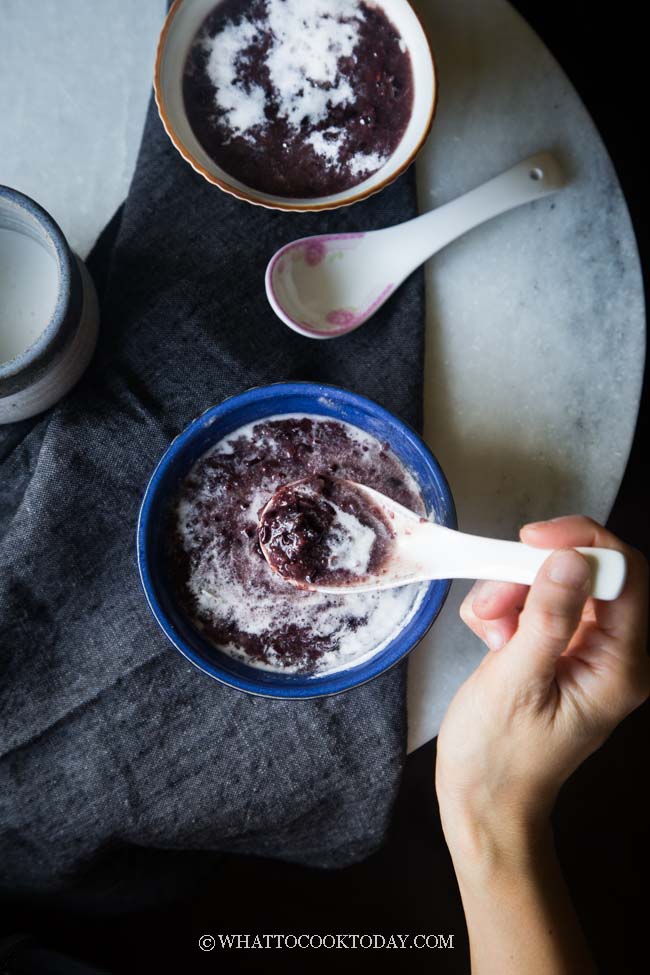 Bubur pulut hitam has a creamy, gooey consistency with soft with some bite from the rice texture because of the starch released from the grains during cooking.
1. IF THE RICE IS NOT SOAKED AND THE RICE GRAIN IS WHOLE (NOT BREAK INTO SMALLER PEICES)
Most recipes you see only require 15-25 minutes pressure cook time, why mine is set to 1 hour 15 minutes?
First of all, I don’t set this time just out of anywhere. I tested the recipe without soaking the rice and pressure cooked from 15 minutes all the way to 1 hour 15 minutes. This is how the rice looks like after 40 minutes of cooking and instead of creamy and gooey, the liquid is basically like a soup 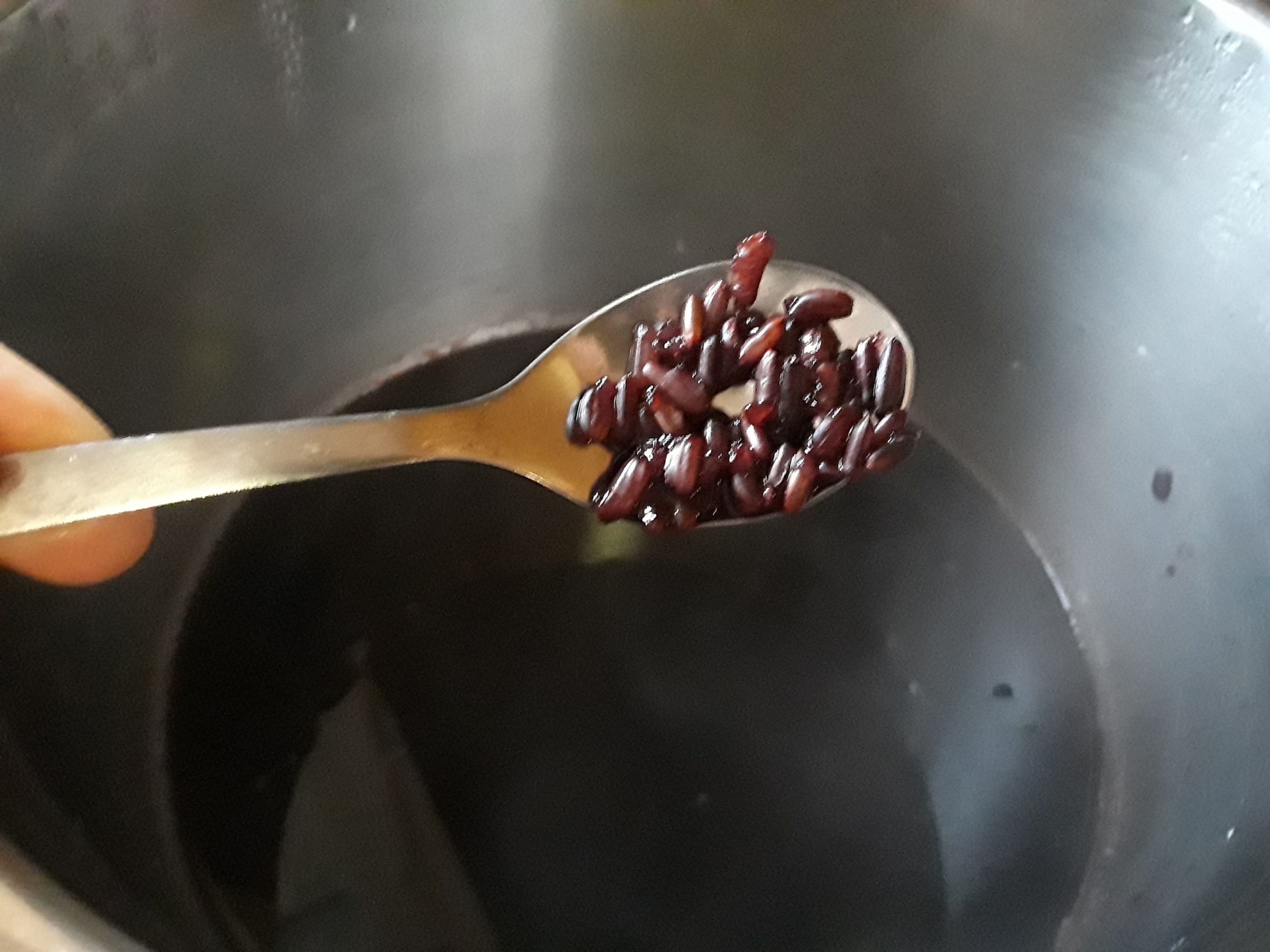 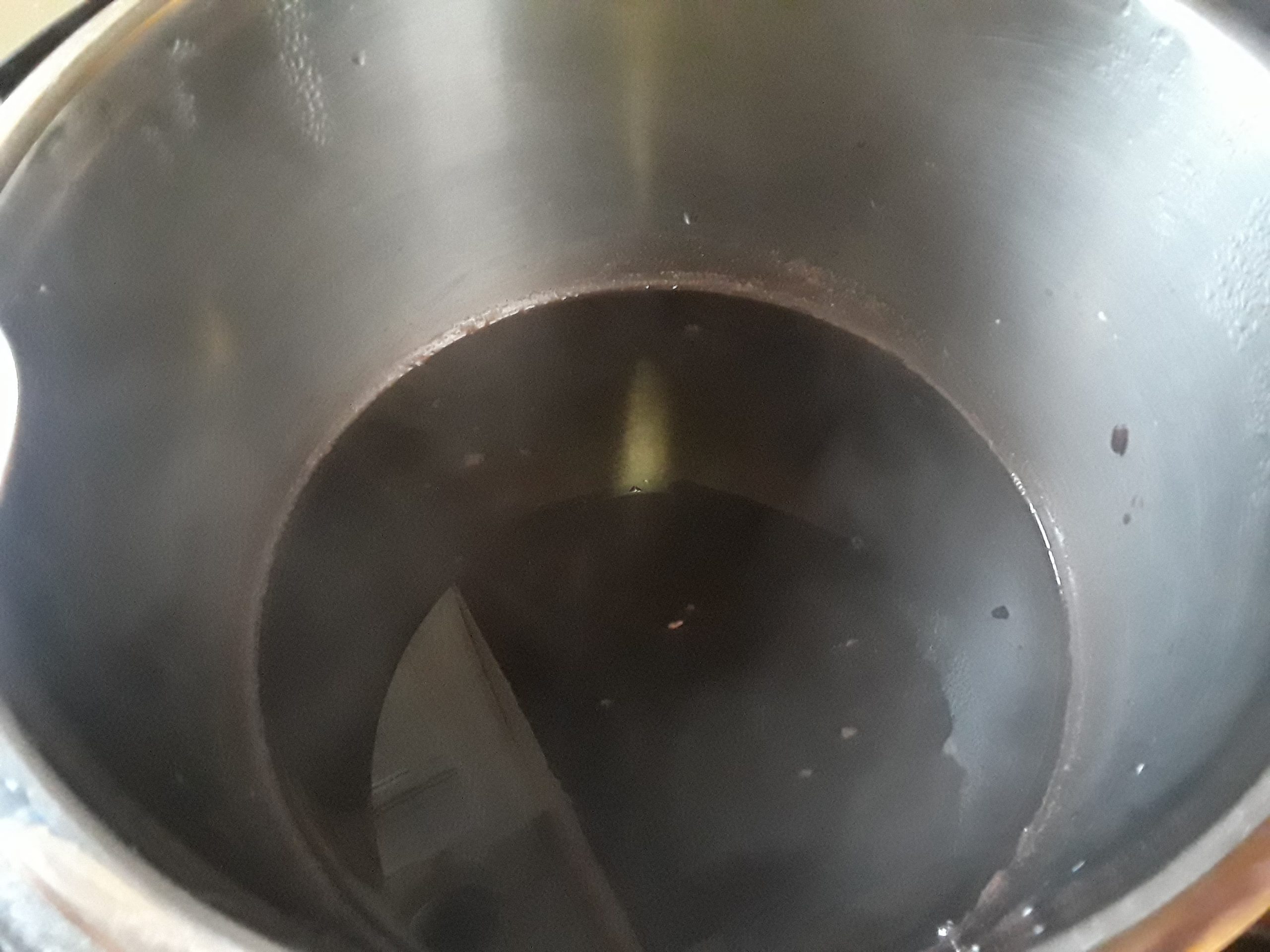 Then I continue to increase the cooking time and it is nice and gooey at 1 hour 15 minutes cooking time and 10 minutes natural release. It’s a pretty long time, but remember that you don’t have to stir or babysit like you would if you were to cook it on the stove.
2. IF THE RICE IS NOT SOAKED AND THE RICE IS BREAK INTO SMALLER PIECES (RECOMMENDED)
Then I decided I need to try to break the rice grains in a blender. I don’t want to turn it into a powder, but just want to basically break the rice grains into smaller pieces to see if it helps to shorten the cooking time and it did. 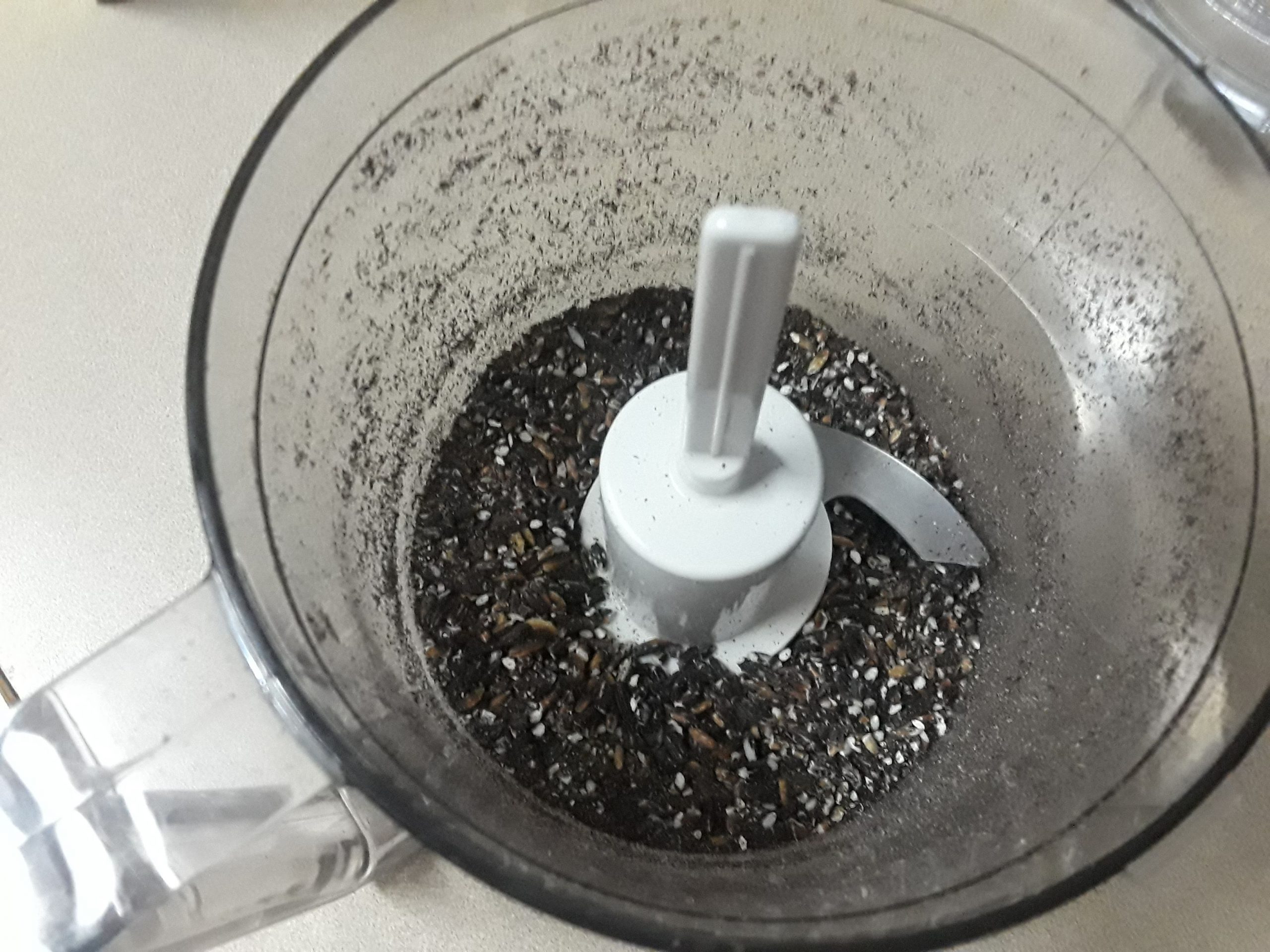 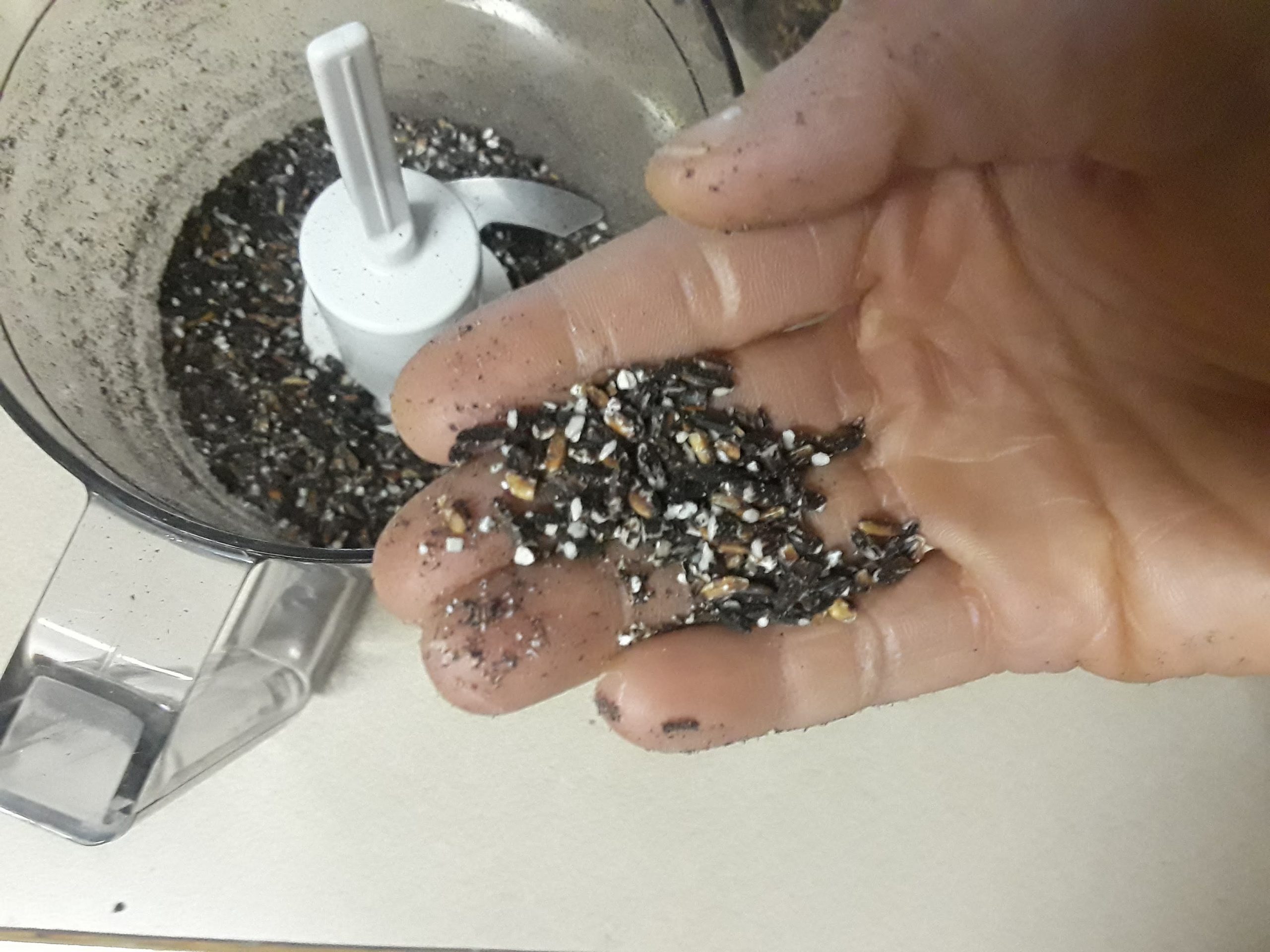 The whole thing turns creamy and gooey much faster too. 30 minutes + 10 minutes natural release are doable with this little extra step. 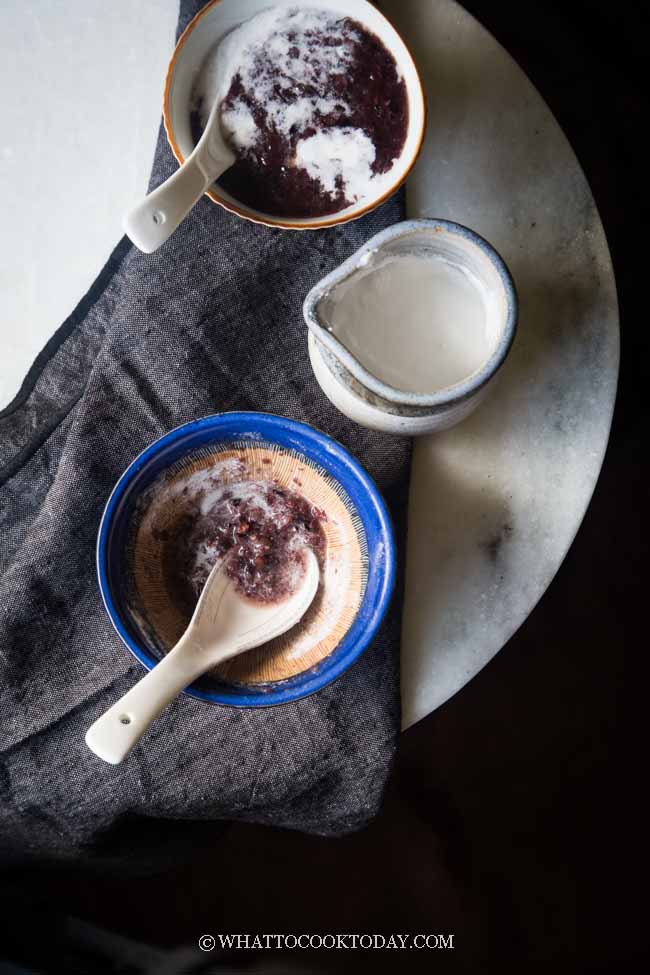 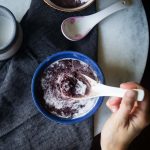 Soak the rice if cooking on the stove:

Break the rice in a blender or food processor :

Cooking with a rice cooker:

How To Cook Large Tapioca Pearls and Tapioca...

Wow! Amazing! You saved me so much time and effort and it came out perfectly in the Instant Pot. Thank you so much!!