This shop has been compensated by Collective Bias, Inc. and its advertiser. All opinions are mine alone. #Bananamazing #CollectiveBias I often get asked how my 5-year old and 2-year old get along. It started out as a big sister who loved her baby brother so much. As this little brother continues to grow, gets into “things”, talks more and more each day, and actually a true copycat of his sister… things aren’t as simple as it used to be. Big sister doesn’t like her brother copying her so much and following her around the house. There were days when I heard “I don’t want this brother anymore” or “He is not my friend. I don’t like him”. I grew up with 2 other siblings of my own and so all of these were all too familiar, but still rather shocking when I’m facing it as a mom. “How can you say that to your brother?” I’d say sometime.

They don’t always fight just to set the record straight. Many times the two did silly things together. Believe it or not, they had their “secrets” (but brother wasn’t good at keeping secret at this age). It’s amazing to watch how their characters formed as they grow. My two kids are definitely a true definition of what they call an opposite. My husband and I often make fun of how different their personalities are. It’s super obvious when it comes to food. My girl is one to keep her guard up when it comes to trying new food. The boy LOVES to try new food. That’s how he got started eating some spicy food. We wouldn’t let him try because we thought it might be too spicy for him. MELT DOWN ! We let him tried and the boy got hooked! My monkey girl loves her bananas. I thought the boy liked them too. EEK!!! Not anymore. He has decided he doesn’t like bananas anymore. When I got Sir Bananas™ Chocolate Bananamilk from Walmart the other day, needless to say, my daughter loved every drop of it. It’s chocolate, it’s bananas, it’s perfect for her as I expected. I didn’t offer it to my son because I thought he wouldn’t like it. He asked to try the chocolate banana milk. So I poured him some and the next thing I knew, he kept asking for refills. So, a lesson for me to learn – Don’t assume! I’ve never tasted banana milk myself and I gave it a try and it was creamy, smooth, and I like the fact that it’s made with real bananas. I’ve been making overnight oats with this Sir Bananas™ Chocolate Bananamilk too and the kids like them. In case it’s not obvious, we love our rice in this house and I made this very berry chocolate banana rice pudding using Chocolate Bananamilk. They were very well received. 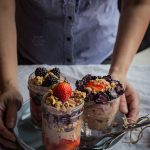 The next time you are at Walmart, don’t forget to check their dairy aisle and look for Sir Bananas™ Bananamilk. There are 2 flavors to choose from: Bananamilk and Chocolate Bananamilk. My kids are going bananas with this Chocolate Bananamilk and very berry chocolate banana rice pudding. It’s quite a feast to the eyes and the palates 😉 Have your kids ever tried Sir Bananas™ Bananamilk ? There’s a chance they might go bananas 😉
PIN IT!