Chinese century eggs are seasoned and served with roasted peppers may sound weird but a great combo of flavor and taste. I did not realized the last time I made congee with century eggs was almost 6 years ago. I’ve had it at the restaurant all this time of course, but I haven’t made them for a really long time and decided it’s time to revisit this comfort food. What the heck is century eggs you would ask. I eat pretty much anything under the sun except for grubs and durian (the king of fruit they say). Durian is one of those thing that you either like it or you hate it. I fall into the latter group. Century eggs are the same. I don’t think there’s a middle ground for this. I happen to LOVE it! I don’t even know how to describe what it tastes like 🙂

Century egg, also known as preserved egg, hundred-year egg, thousand-year egg, thousand-year-old egg, and millennium egg (or Pidan in Mandarin), is a Chinese cuisine ingredient made by preserving duck, chicken or quail eggs in a mixture of clay, ash, salt, lime, and rice hulls for several weeks to several months, depending on the method of processing. Through the process, the yolk becomes a dark green, cream-like substance with a strong odor of sulphur and ammonia, while the white becomes a dark brown, transparent jelly with little flavor. Okay…at this point you are about to close this browser and leave I know! 🙂 Century Egg can be eaten without further preparation on its own or to compliment other dishes. In this case, I whip up a congee using century egg. Century Egg may not be for everyone, but I absolutely adore it! And I can assure you many Asians do too 🙂 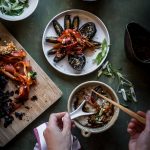 Sauce for the century egg with bell pepper (mix all ingredients in a serving bowl):

With century eggs in the congee:

I’m glad that my two kids like the century egg with the congee. They wouldn’t eat it on its own, but they would in the congee.