My very first Chinese meal after I moved to Minnesota 6.5 years ago was at this Sichuan restaurant. I literally fell in love with Sichuan cuisine since then. We go there so often that the waiter and waitresses know us. We’ve even claimed a spot at that place ha! We always sit at the same table, our favorite table near the window that my husband said it’s brighter and not too dim. Now two kids later, they even know our kids 🙂 and we always order the
Szechuan Fragrant Crispy Duck (Xiang Su Ya), because the kids are obsessed with that dish.

I learned of Cheng du Wontons from this restaurant. They are named as Cheng du wontons mainly because of where these wontons originated from, Cheng du, the capital of Sichuan province in China. We had never ordered it before and we went there pretty often and decided to try something different.

The wontons are sitting on top of the sauce which consists of chili oil, sesame oil, garlic, black vinegar, soy sauce, and sugar. It tastes rather spicy (if you put lots of chili oil), a little tangy from the black vinegar and sweet at the same time. I really like them. I think I like this version even better than the one at the restaurant. Theirs are good too, but the fillings only use pork and the sauce are mainly chili oil. The filling in this recipe uses shrimps, which IMHO just makes the wontons taste so much better. The sauce in this recipe has more flavor: spicy, sweet and sour at the same time. 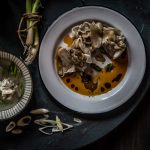 6 Unique and Easy Mooncake Recipes You Should...

I’ve always wanted to try wontons, so I’m totally making these! They look so good!