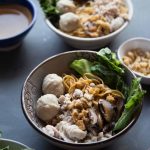 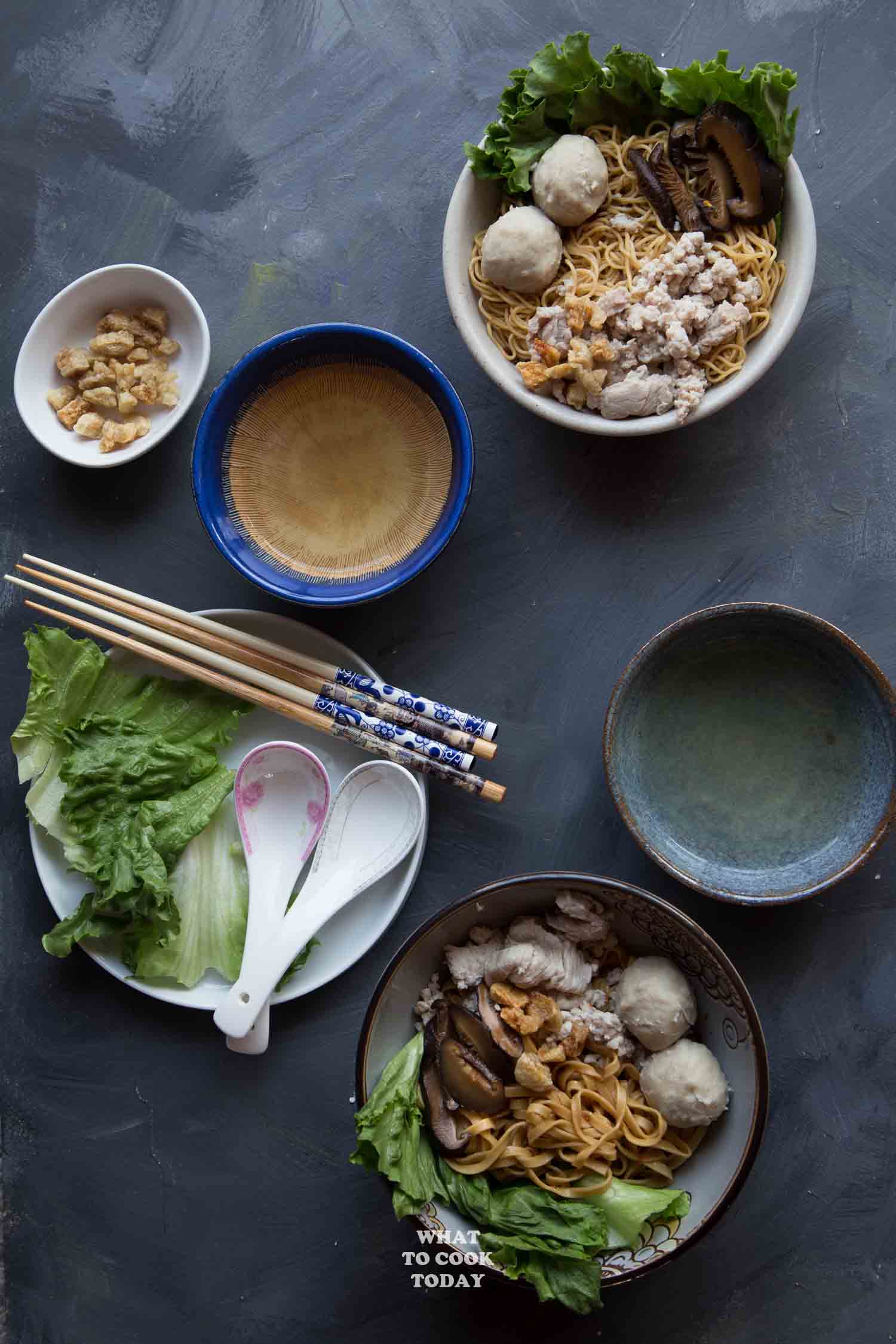 If you ask me what is one of my favorite foods to eat in Singapore, I will tell you it’s Bak Chor Mee (Minced Pork Noodles). My sister introduced bak chor mee to me when I first moved to Singapore and I swear to God, I got hooked ever since to this date.

WHAT IS BAK CHOR MEE?

Bak Chor means ground/minced meat. Mee means noodles. I usually eat the soupy version. You can use thin noodles (mee kia) or wide noodles (mee pok) to make bak chor mee. I like mee pok, but if you hand me mee kia, I would inhale them within seconds too. In the video I used my own homemade Chinese egg noodles. It’s a bit thicker than mee kia because I used a spaghetti cutter. The noodles are then tossed in pork lard, Chinese black vinegar, stock from braising mushroom, chili sauce (or not), a bit of fish sauce and then topped with tender slices of braised mushroom, pork meatballs, pig’s liver (not in this recipe because I couldn’t find fresh ones), minced pork, and sliced pork. I have the soup served on the side. 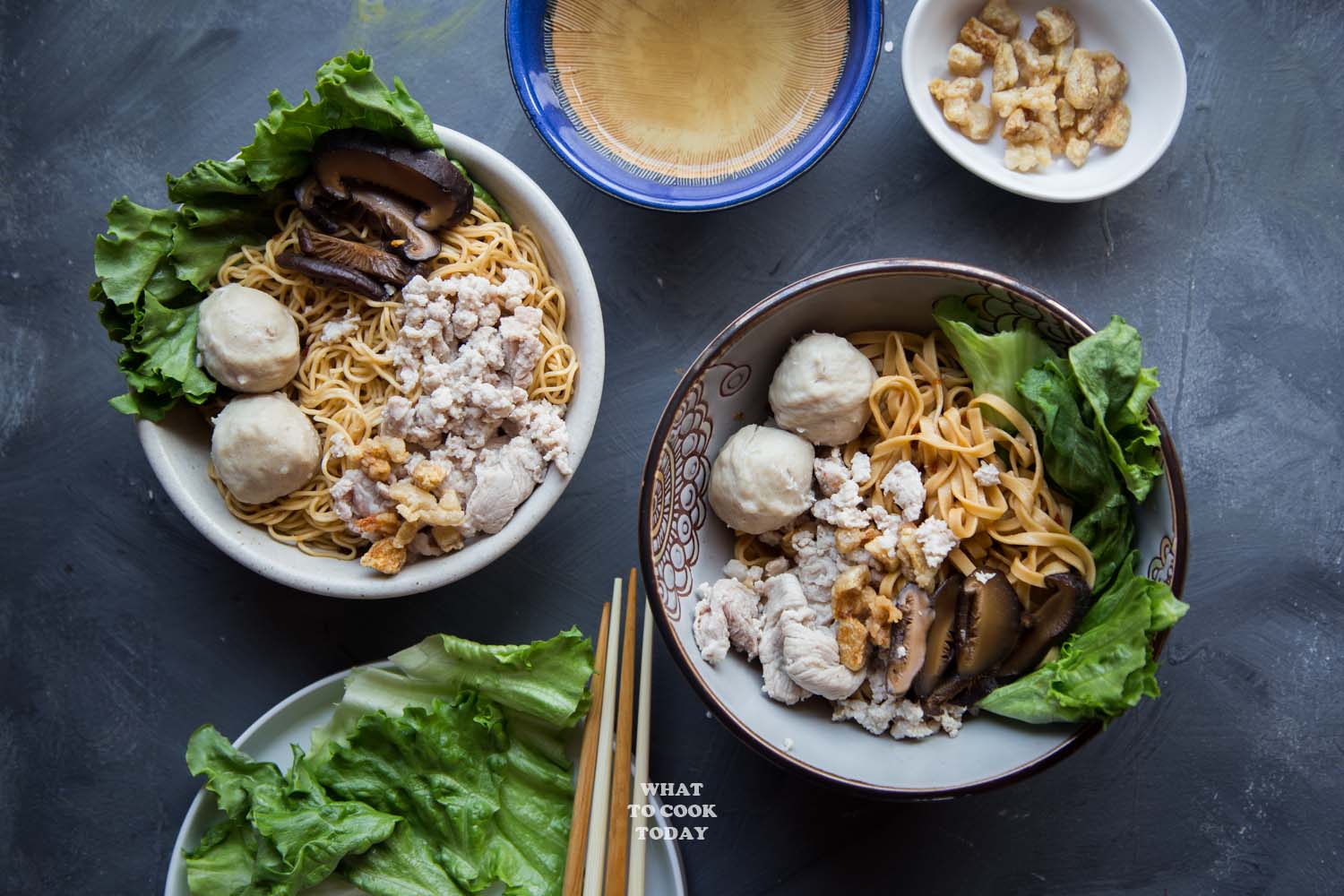 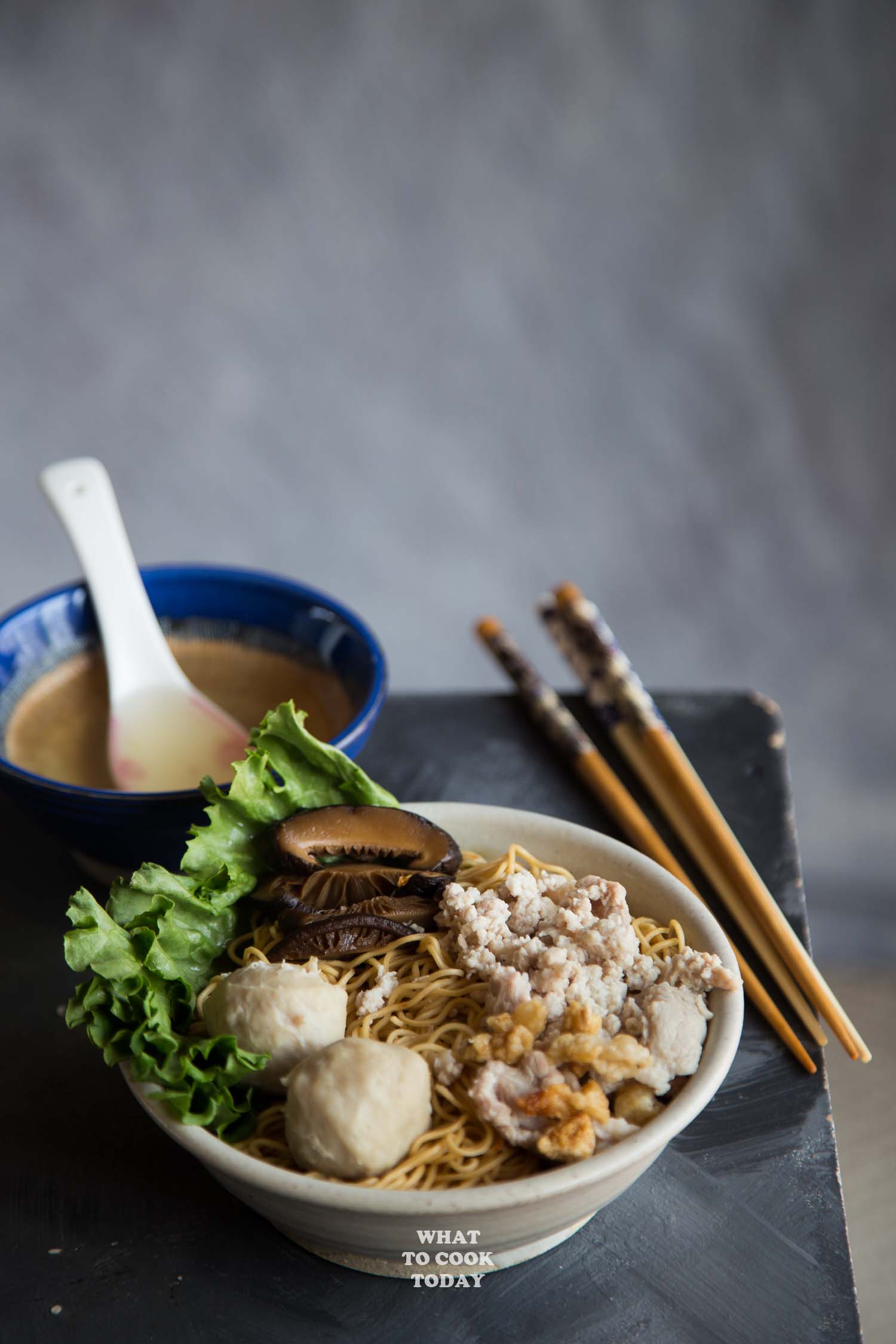 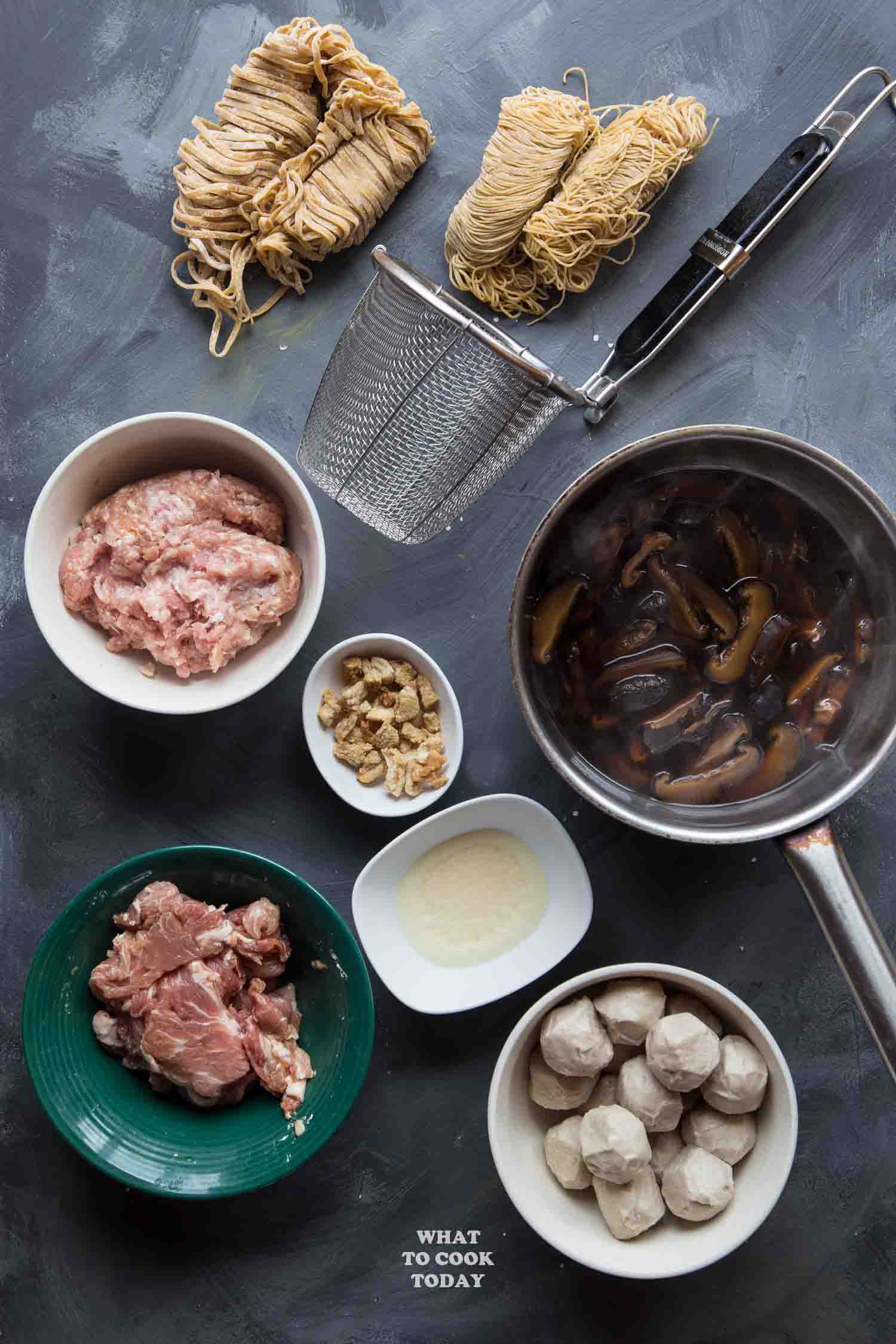 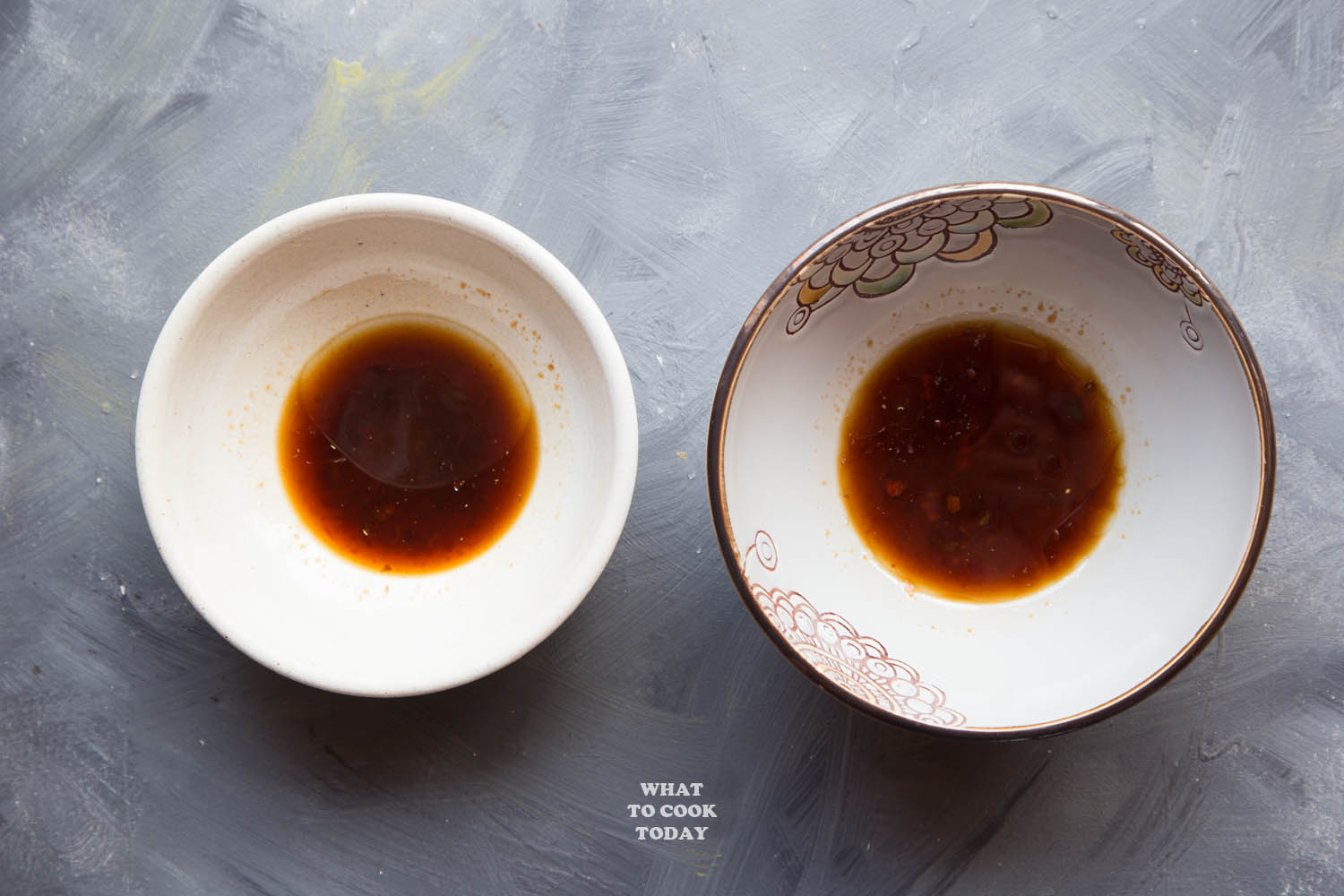 WHY IS THIS EASY BAK CHOR MEE?

I call it easy version because I simplified the recipe, but trust me it is still tasty. I didn’t make the broth from scratch using pork or chicken bones. I used organic chicken broth (you don’t have to do organic) and then boil them with dried anchovies (ikan bilis). It saved so much time but still gives you that nice flavor. 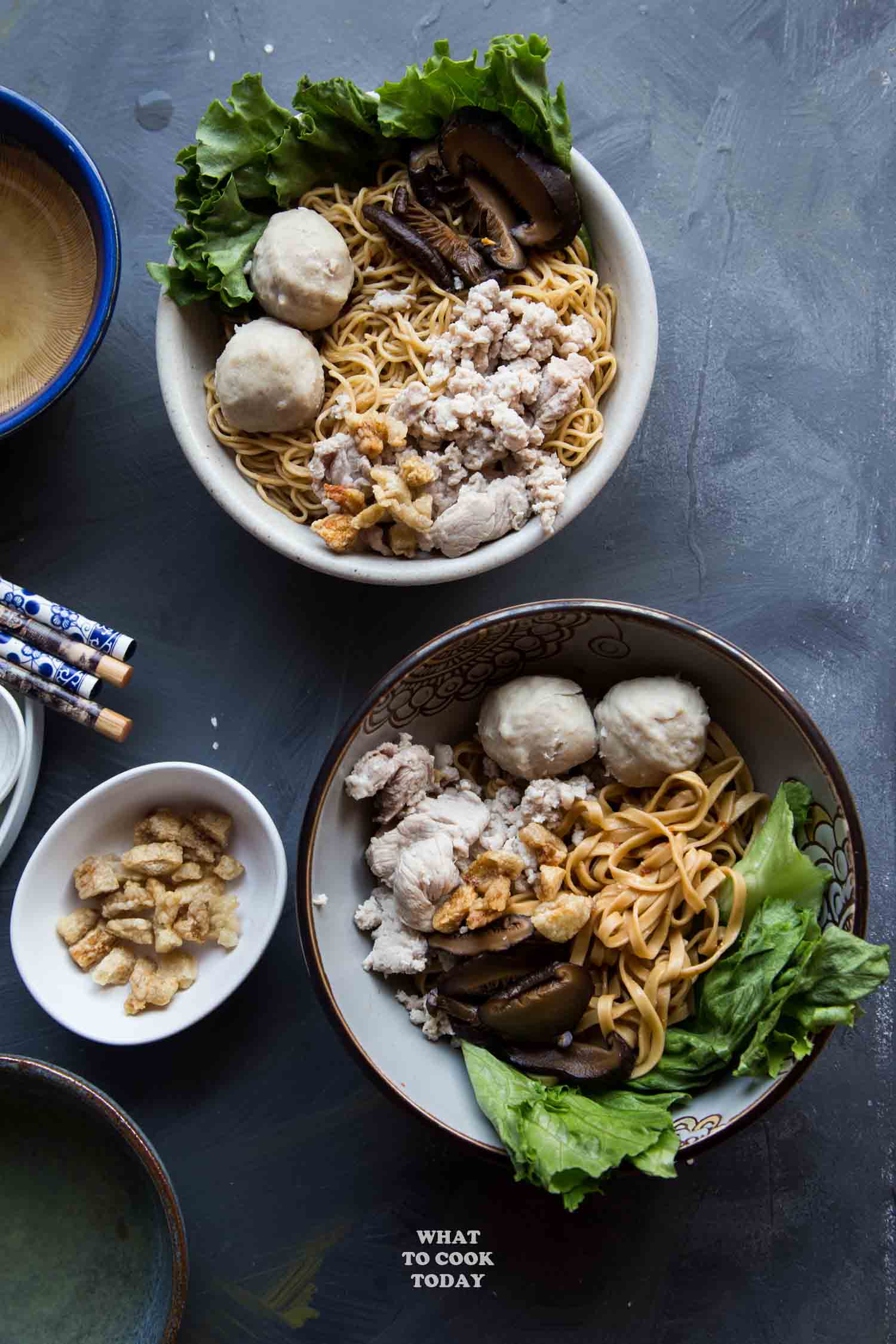 It helps to prepare things the day before so you don’t feel overwhelmed on the day you want to serve bak chor mee. It may seem like still a lot of things to do, but it’s actually not as complicated as it seems
1. Prepare things the day before
-I marinade the thinly sliced pork, minced pork, and liver slices (if using) with seasonings and cornstarch the night before
-Braise the mushroom the night before
-Prepare the broth by using store-bought chicken broth, ikan bilis, and soybeans if you choose to. I didn’t use the soybeans
–Prepare lard and crispy lard if you choose to use. I use crispy garlic bits in place of the crispy lard
2. On the day of serving
On the actual day of serving, I just need to quickly cook the noodles and tossed them with seasonings. The minced and sliced pork cook very quickly in a boiling broth and that’s why they are still tender when you eat them 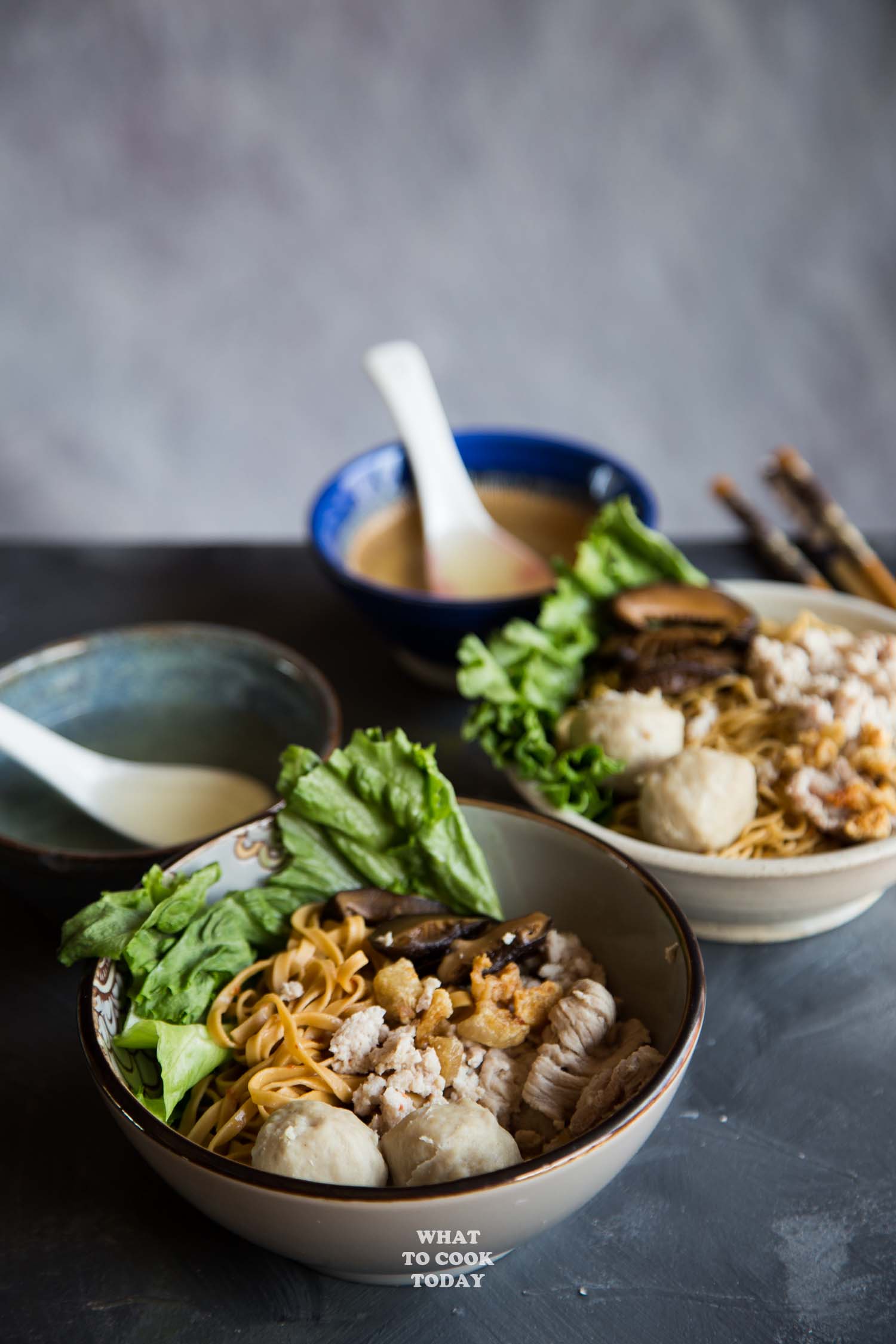 TOOL THAT I SERIOUSLY THINK HELPS A LOT WHEN YOU MAKE BAK CHOR MEE:

Noodle Blanching Basket (Noodle Mesh Strainer)
Whatever you call it, this little basket is my favorite thing to cook noodles. It cooks portion by portion and it helps to prevent overcooking the noodle too. I also use this very same tool to blanch the minced and sliced pork. Everything is contained in the basket and doesn’t make a “mess” in the broth. 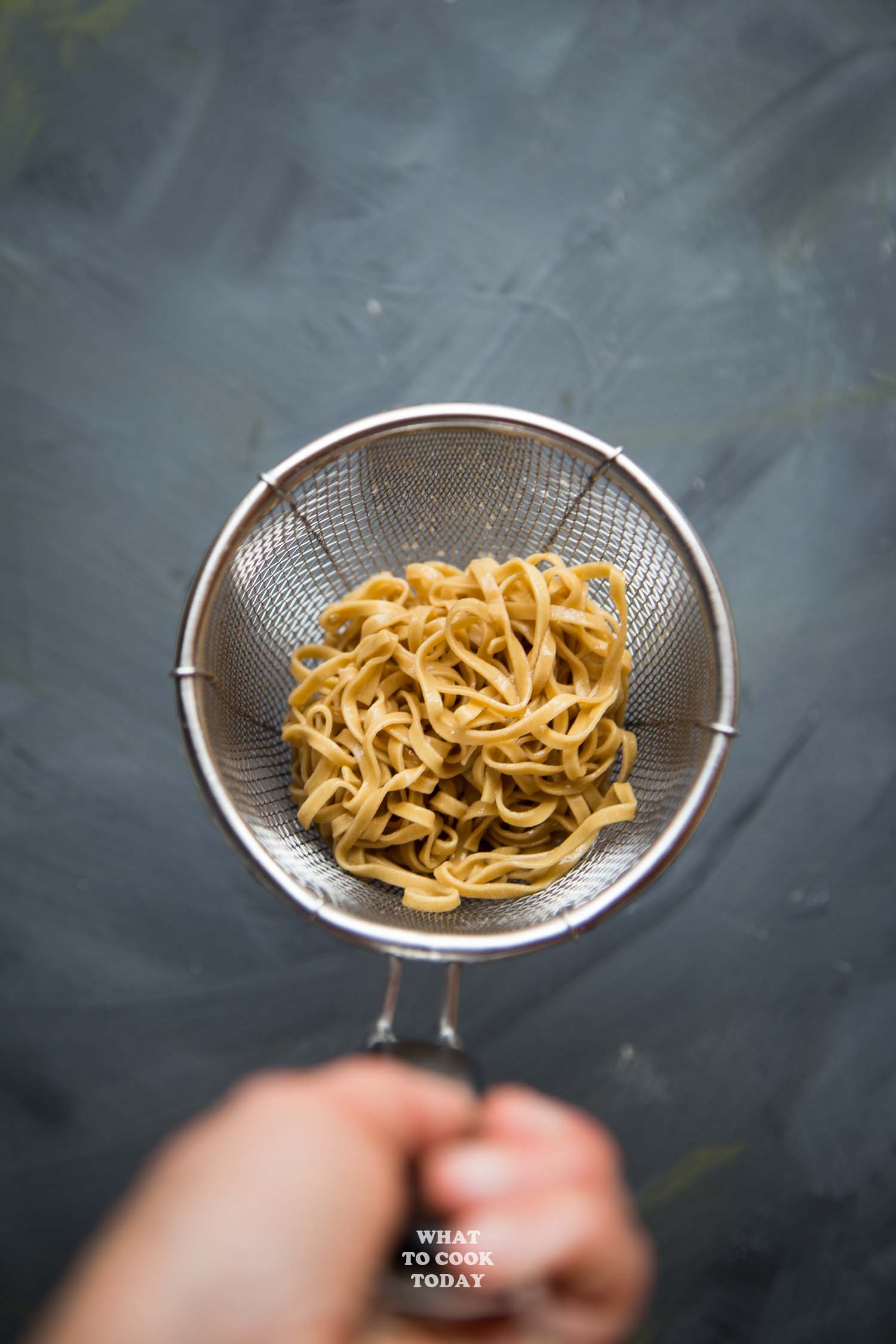 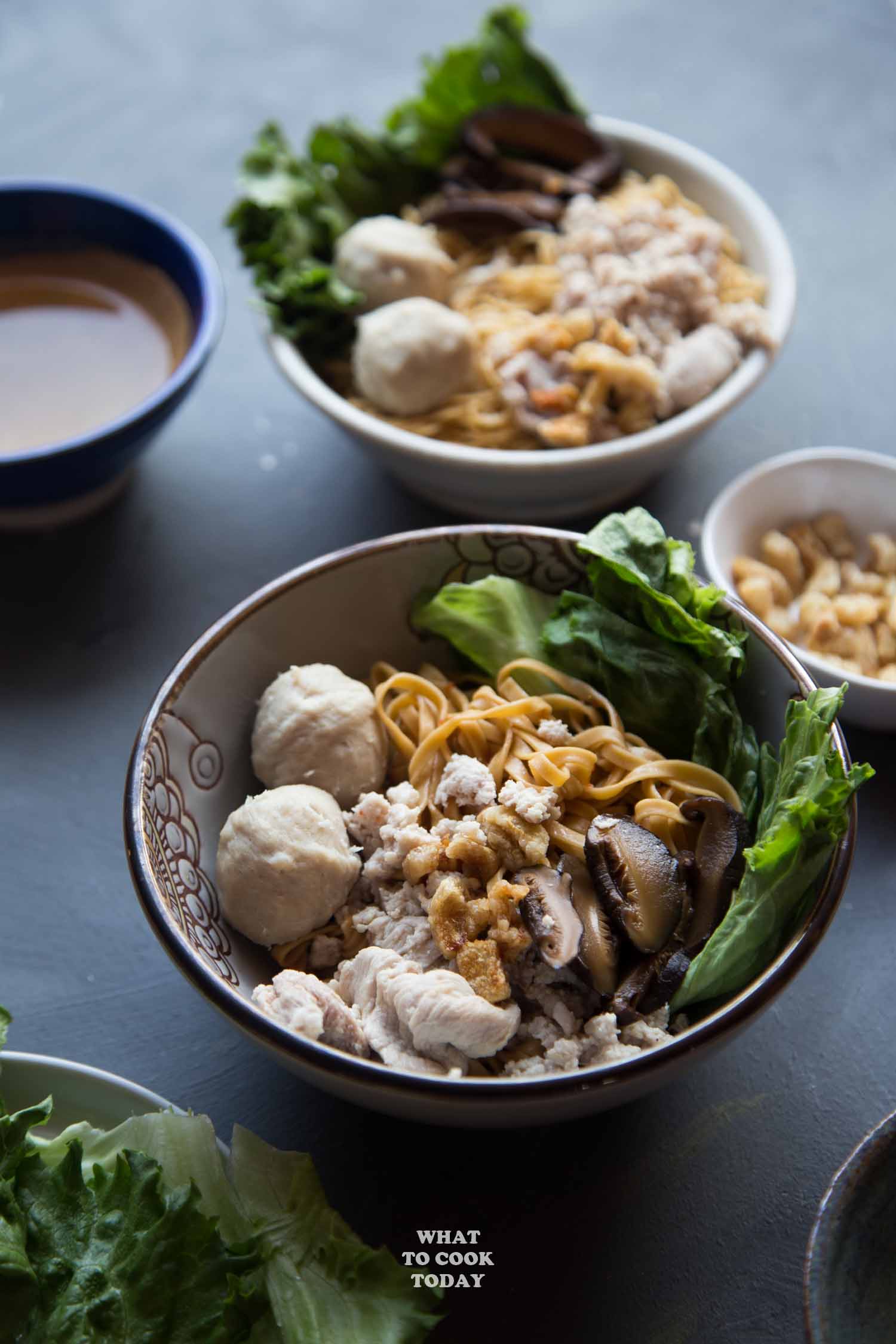 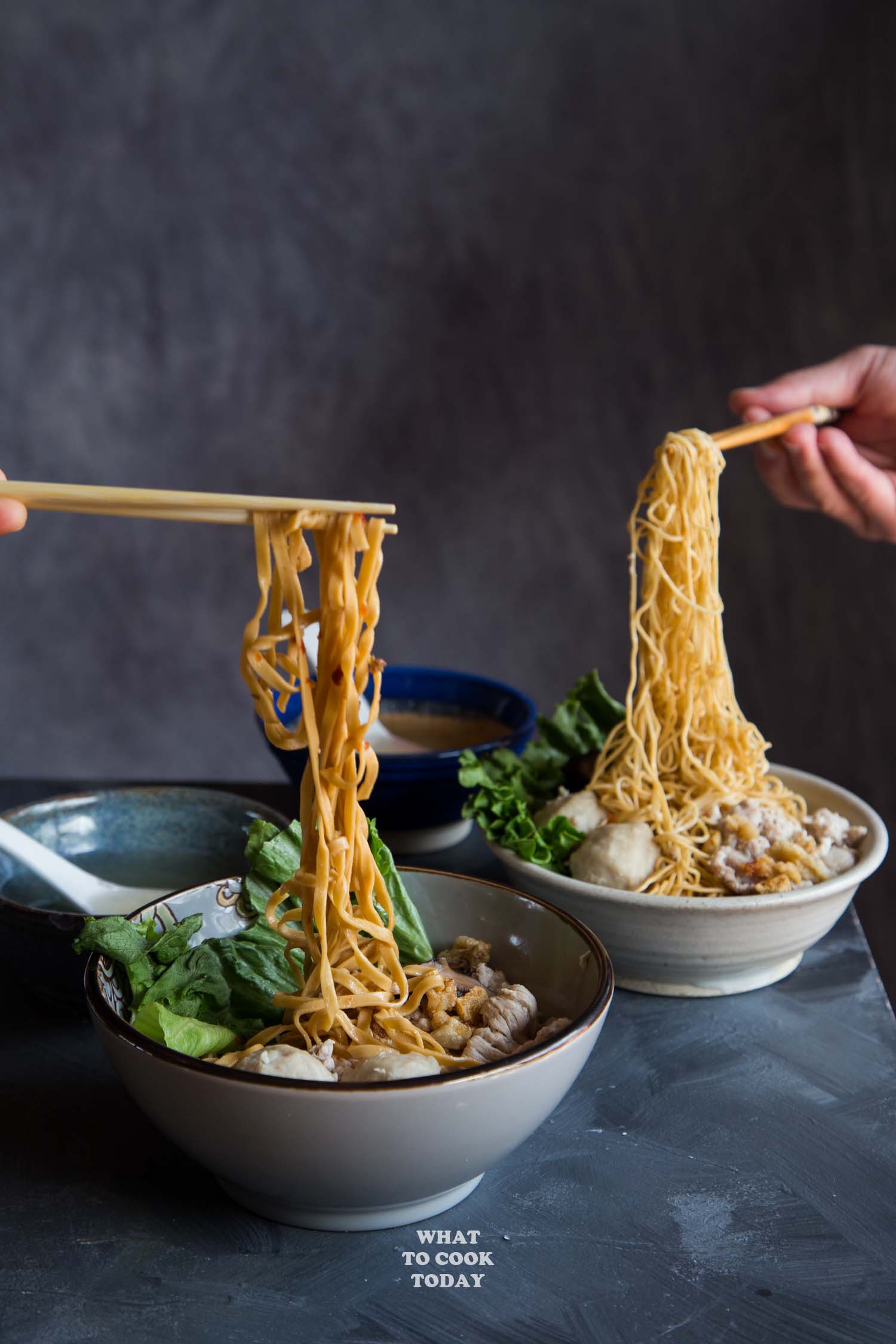 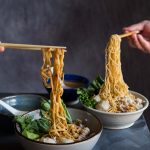 Tossing sauce for noodle (this is the recommended amount for each serving bowl):

Toppings (you can use any of the followings):

TO PREPARE THE DAY BEFORE

ON THE DAY OF SERVING

Cook the meat and liver:

Finish up with toppings and garnishes:

This is indeed a great recipe. Thank you very much! The music in your video is nice too, do you know the name of the song?

Although your video is very clear about the braising process of the mushrooms, the instructions of the braised mushroom in the recipe on this website could be improved by adding a sentence somewhere that the sliced mushrooms are returned to the pot before braising.

The song’s title is Heavenly by Aakash Gandhi. I got it from YouTube Audio Library.
Thank you for your feedbacks. I always appreciate them. Sorry that the written instruction wasn’t clear before.
The noodles are usually rinsed in cold water to get rid of excess starch and also for that springy texture. If you are concern that the noodles won’t be warm anymore when you serve, you can definitely submerge it back in the boiling water you cooked the noodles in earlier for just 2-3 seconds just to warm it up really quick before putting it in the bowl. I hope that helps to clarify.

Thank you, it is fully clear now.

Hallo…I don’t have black vinegar at the moment. Can I susbatitute with something else? Thank u

Hi Fellysia, your closest substitution is probably balsamic vinegar. Balsamic vinegar is sweeter than the Chinese black vinegar though, so you may want to start with half the amount and see.

Is there any way I can replace the pork lard oil as we don’t take pork lard (health reasons)?

You can absolutely use healthier oil of your choice such as avocado oil, light taste olive oil, or any oil with neutral flavor will do. My daughter likes it with sesame oil 🙂 it’s really your choice. You don’t have to use lard 🙂 I just tried to mimic the hawker style 🙂

It looks delicious! I actually managed to buy the black vinegar in England, but now I miss the dried anchovies. I remember buying them years ago, when we were living in London, and throwing them away in the end, because I didn’t know what to do with them… 🙁 I wish I had them now. Anyway could I replace them or leave them out? I’ve never made pork stock before, that would be interesting.

Hi Adina, you can absolutely leave the anchovies out. It’s not necessary. When I lived in Singapore for a short while, I learned that the locals like to use dried anchovies to make stocks.