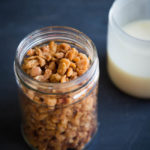 Learn how to render lard using pork fat and get the crispy fried lard (bak eu phok) at the same time. The lard can be used in cooking or baking and the fried lard is great as a topping for many dishes. 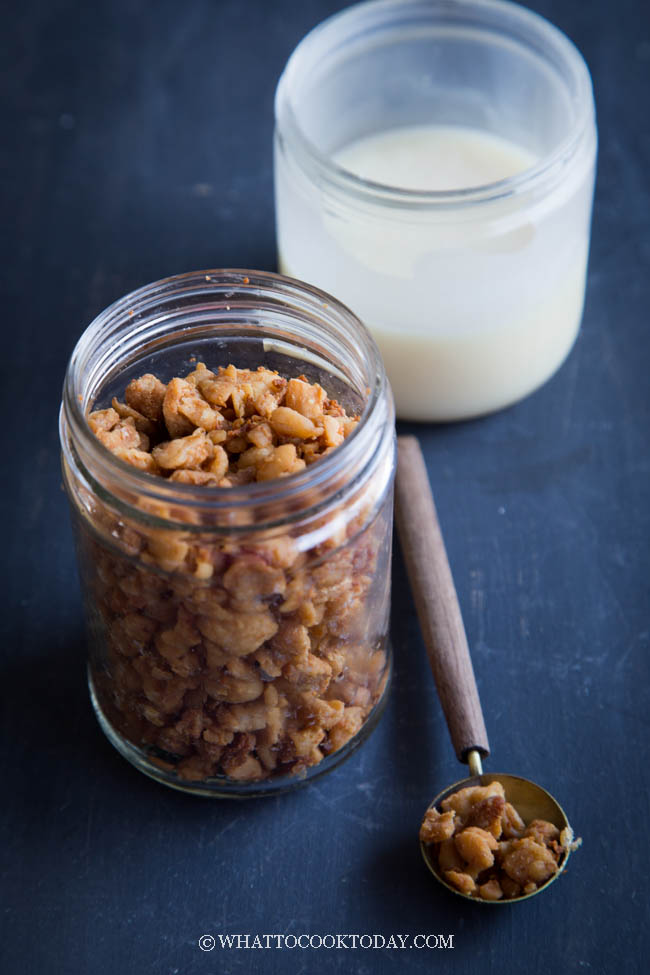 How To Render Lard and Get Crispy Cracklings (From Pork Fat)

I saw packs and packs of pork fat sold at our local grocery stores and I couldn’t help but getting several packs of them. As a kid, I remember mom used to make ba eu phok / bak yu phok using pork fat. This is different from the crispy cracklings on the pork skin that you get from roasting pork belly, siu yuk. Bak eu phok is the actual fat itself that has fat rendered out and turns into crispy fat (lardons).

SOURCES OF PORK FAT AND WHICH ONE TO USE

SOFT FAT / LEAF LARD: This fat is usually found surrounding the kidney and the loin. It doesn’t have a strong pork aroma. It also gives really white lard that is perfect in making those flaky pie crust and baked goods
HARD FAT / PORK FATBACK: As I mentioned before, this comes from the back of the pig.
PORK BELLY: In Chinese, we like to call this three-layer meat. The top part is the skin and in between layers of the meat, you will see the white part.
I recommend using pork belly fat or pork fatback to get crispy fried lard. Leaf lard usually yield the highest quality of lard but the fried lardons are not as crispy compared to the ones from pork belly fat and pork fatback.

WHERE TO GET PORK FAT

Trimmings: When my mom trim off fat from pork belly, she likes to save enough of these trimmings to make lard and bak eu phok.
From the store: I got the fat from the store in the frozen section. The packaging did not mention which part of the fat it is, but I suspect it is most likely pork fatback and a mixture of other low/medium quality fat. 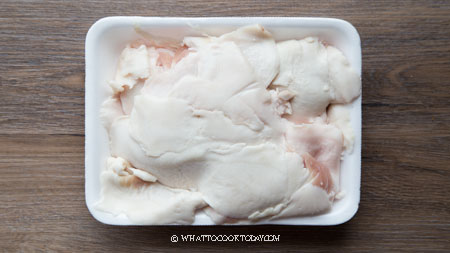 This recipe uses a method called wet rendering to get the pork lard and fried lard. I used to do dry rendering until my mom told me that it’s better to do the wet rendering.
What’s the difference you may ask?
Wet rendering involves adding water and the fat is boiled until the water dries up and then the fat slowly rendered out. Dry rendering is simply done by adding the fat cubes on a dry pan and let the fat slowly rendered out, like you would when you fry slices of bacon.
I prefer wet rendering now and here are the reasons why:
WET RENDERING: Higher smoke point, neutral flavor, more golden brown color, airier
DRY RENDERING: Lower smoke point, more smoky flavor, darker color, denser

1. CUT THE FAT
Cut the pork fat into small cubes. Try your best to cut into similar size as much as possible so they will cook at approximately the same time 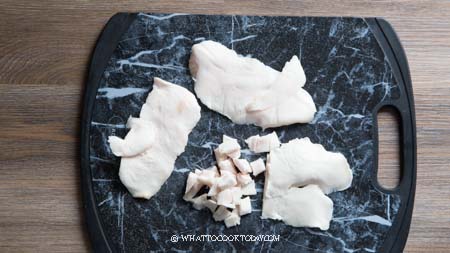 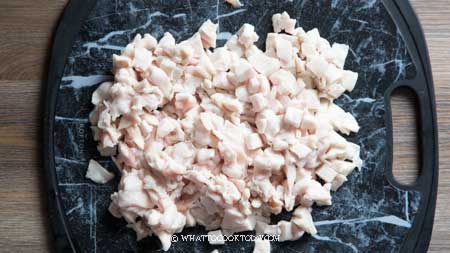 2. RENDER THE FAT
Place the pork fat cubes in a large pan or wok without any oil. Spread them out and pour water 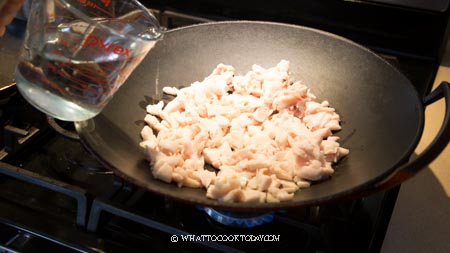 The water should be just enough to cover the fat. Don’t pour too much 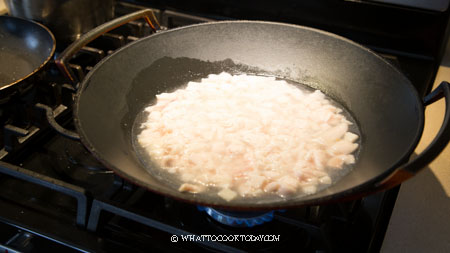 Bring the water to a boil and then maintain the heat on low to let it just gently simmer. Do not rush to boil it. We want it to slowly render on low heat 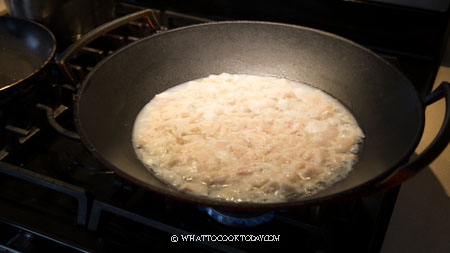 The water will continue to evaporate and it eventually dries up 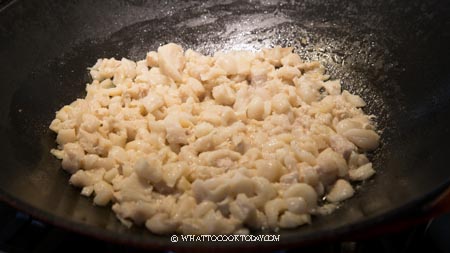 The water has dried up

3. FAT CUBES TURN INTO FRIED LARD
You will start to see the lard started to render out slowly. Maintain heat at low. Don’t be tempted to crank up the heat 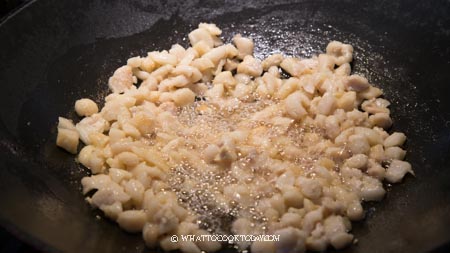 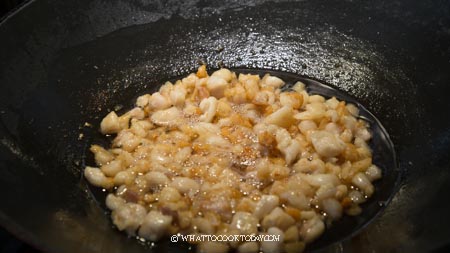 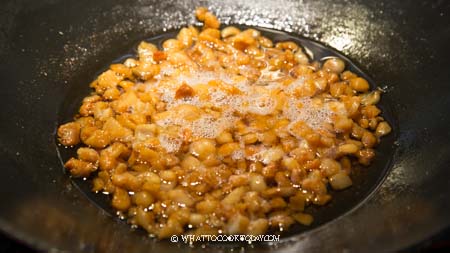 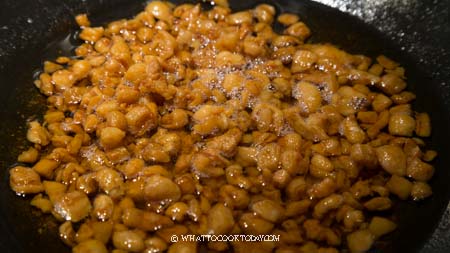 Once the bak eu phok is crispy, remove from the lard into an absorbent paper towel 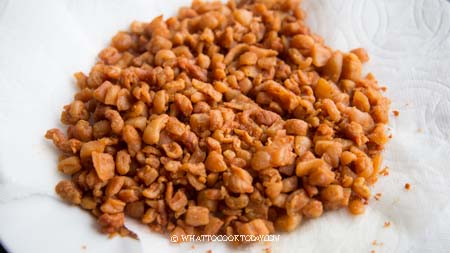 4. FILTER THE LARD
Filter the lard into a clean glass jar and let it cool down before covering the lid 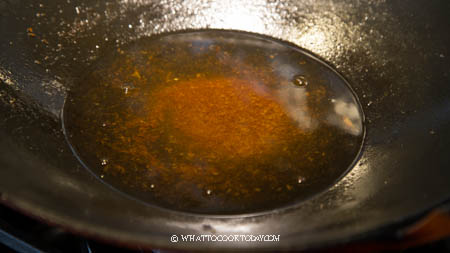 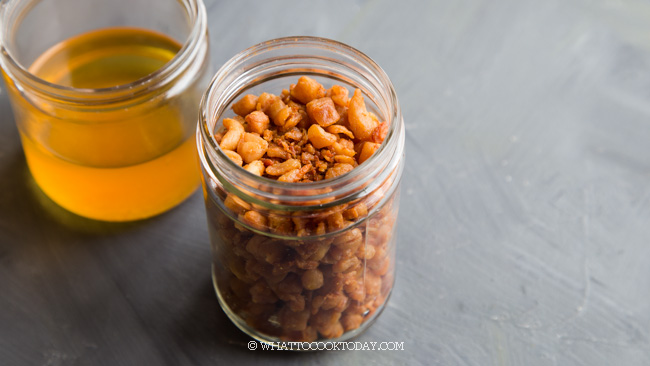 The lard when it’s still hot/warm 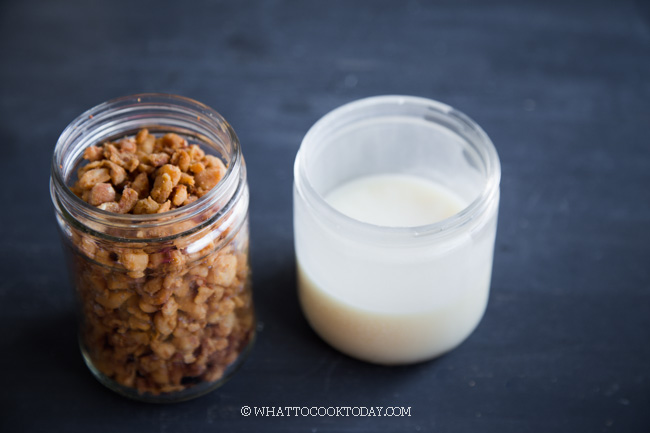 The lard after cools down and refrigerated

TIPS YOU NEED TO KNOW

1. If you trim the fat from pork belly or other parts of the meat, make sure you get as little of the meat part as possible if you want to get good crispy bak eu phok
2. Maintain heat at low as this will ensure you get lard that is nice and white and the bak eu phok won’t get too dark or worse, burnt
3. Make sure the bak eu phok as cooled down completely before you store in an air-tight container or they will turn soggy. If properly stored, they can last for about a week 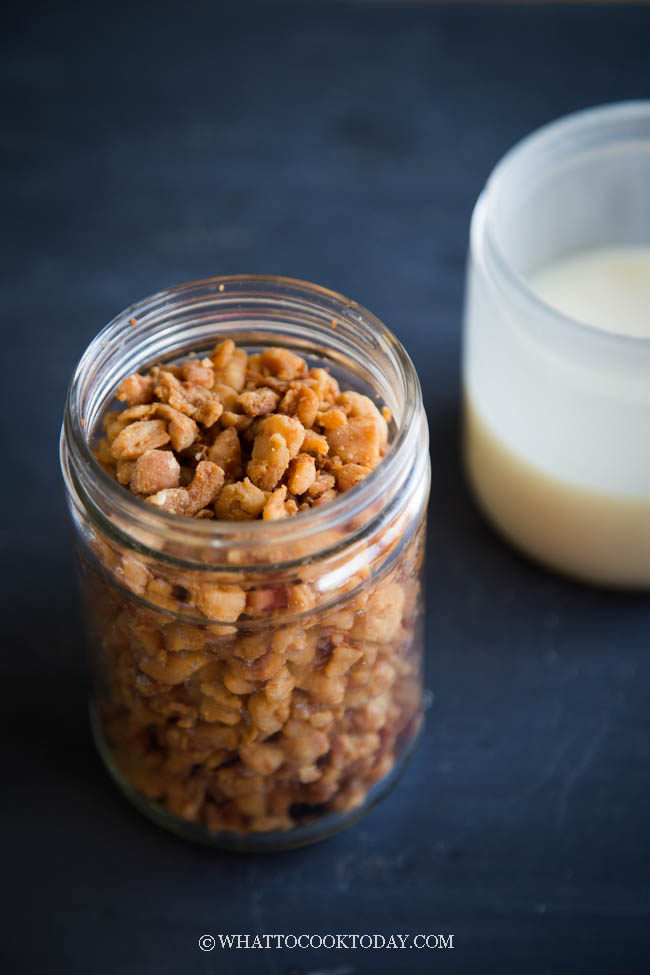 USE BAK EU PHOK AS TOPPINGS

We like to use bak eu phok as toppings for char kwe tiau, Singapore Fried Hokkien Mie, KL Fried Black Hokkien Mie, Medan Hokkien Noodle, Bakmi Khek. My kids like to munch on them like they are potato chips LOL! (I can’t blame them!) 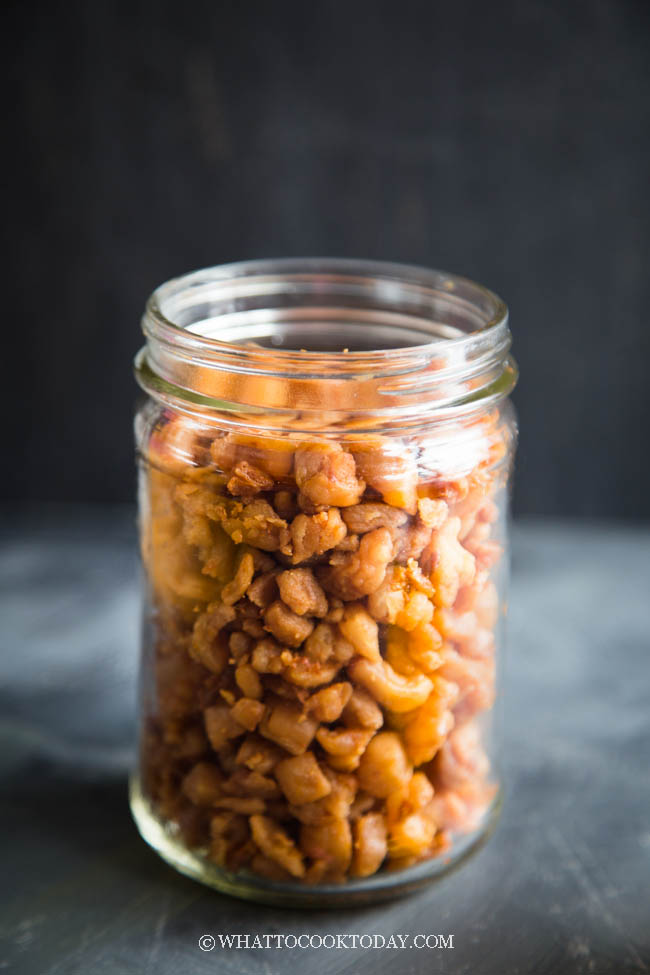 DID YOU MAKE THIS PORK LARD AND CRISPY FRIED LARD RECIPE? 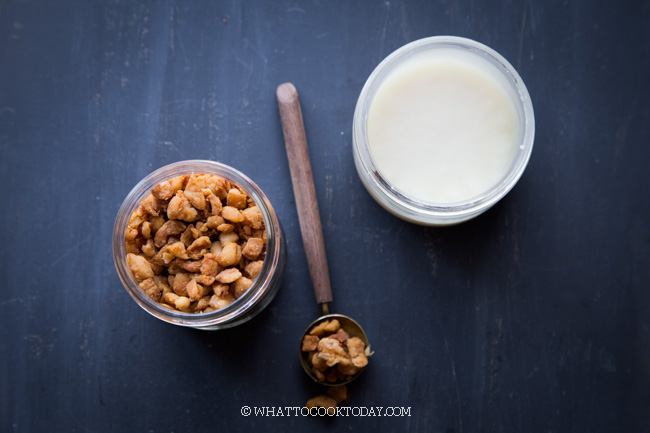 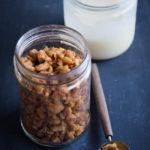 Stir-fried Gai Lan with Pork (How To Make...

I also make ‘schmalz’ which means sentimentality, with the lard, the crispy bits and an onion fried til golden and left to set. It is then spread onto bread in place of butter or oil. My husband loves it when I make it!

Thanks for posting this recipe! I render pork fat to lard every few months or so. For me, I do it for the little ‘bak eu pkoh’. I have a recipe handed down from my husbands family and the little bits are minced and added to beef mince that is stuffed into potato dumplings. We eat this only a few times a year with sauer kraut and roast belly pork. His family had an inn in Zagreb and all the pig was used to stretch out their meals.

oh my…that sounds so delicious! The potato dumplings with beef mince and the bak eu phok 🙂

Hi Marv! Which sauce recipe is best for CRISPY FRIED LARD?Thank you for sharing your recipe🤗.

Hi Thiha, I usually use fried lards/lardons as topping on fried noodles or fried rice for example. What are you trying to make?

Hi Marv,
I tried wet rendering first time after reading your post. I used fat trimmings from the pork belly as well as the pork shoulder.
My questions are:
1. for the rendered fat, is it supposed to be solid, or is it supposed to look liquid-y? Mine was liquid-y, but it’s very white.
2. for the cracklings, why is mine stuck together? More like clumpy, instead of loose and separated like your pictures.

Hi Sri,
The rendered fat should be semi-solid once it’s cooled down completely. It’s kinda soft but it shouldn’t be liquidy though. Some of the cracklings may stuck together when you fry them, especially those that still have a bit of meat part on them, so just try your best to separate them during cooking

Thank you for sharing your experience Fred!

Hi Marv,
I’m trying your recipe today. Unfortunately in the middle of rendering fat, mine is ‘blowing’ up constantly. Should that happen? Or there’s something that i did wrong? Thank you!

Hi Steffi,
It shouldn’t keep blowing up constantly. Every now and then, there might be a few that does that, but not constantly. Did that happen after all the water had evaporated and the fat was rendering out?

Can you just heat sliced fatback instead of cutting up all that fat? Is it the same thing. I bought some sliced fatback and cooked it in the pan. it’ took about the same amount of time and I did save all the renderings and today I have white lard. Should I keep it in the fridge or not?

Yes, you can definitely use fatback and the reason I cut it up because I want to make the fried lard bits (which is usually in small pieces like that), but you can definitely use a sliced fatback. The lard should be stable at room temperature but it’s probably just my habit of keeping them in the fridge. They can last for months and months. I hope this helps!

Hi Marv,
I made some over the weekend and store them in the fridge. How do I heat them up?
put them back in the pan?

Hi Sandrine, if you are referring to the lard itself, yes you just heat it up on the pan to melt it. Hope this helps!

How long can the fried pork lard last? I kept it at room temperature in an airtight container, its been 2 months and its still crispy, can i still eat it?

Hi Chun Haw, they can last quite a while I must say. As long as you don’t see any mold or it doesn’t smell rancid or oily/stale, I would say it’s still good to go.

i am lazy…can I do this using a slow cooker? Would it be the same process, just without baby sitting it?

Hi Jos, I haven’t tried a slow cooker yet, but I don’t see why not. Actually there isn’t much babysitting on this too, I probably stir it once or twice throughout the entire process. I just made it again this afternoon LOL! Next time I’ll try slow cooker, it should work