Noodles are tossed in pork lard and served with fish balls, shrimp, other toppings, and crispy pork cracklings that will leave you literally begging for more! A little bit about Hokkien if you are interested to know (if not, feel free to scroll down to the recipe 🙂 ). It is originated in the Southern regions of Fujian province, an important center for trade and migration, and has since been spread beyond China, being one of the most common Chinese languages overseas. Hokkian is one of the many Chinese dialects spoken throughout Asia. My dad’s family is Hokkian and my mom is Teo Chew. In the little town I grew up in, Medan, the majority of people speak Hokkian language, including me and the rest of the family! I got a whole pack of pork fat from non-Asian grocery store (yes, I know. I’m surprised myself that they have this). Came home and just cut them into little cubes and put on a large pan and let the fat slowly renders out and you end up with crispy cracklings like this! The combination of flavorful pork lard, crispy pork cubes and everything else in that bowl is unbelievably good! Medan Hokkian noodle is definitely one of the foods I MUST have when I visit Medan period! Note to self though, I need to get two packs of pork fat next time because my two kids were fighting over this! I’m not joking! 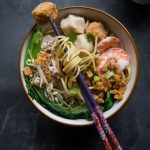 You can also use Chinese BBQ pork (Char siu) slices instead of chicken or both and substitute fish balls and cuttlefish balls with other balls like shrimp/prawn balls or pretty much whatever you desire. Some people add friend wontons as one of the toppings too.
Tried this recipe?Mention @whattocooktoday or tag #WhatToCookToday

Hello marvellina, i just opened the link you sent and it appears to be brown butter macadamia salmon recipe. Not nasi ayam medan though. Pls advise

Oopsss…so sorry. I must have copied the wrong link. It should be this: https://whattocooktoday.com/nasi-hainam-medan.html

Yes definitely. I would love to know the authentic recipe. It has been so difficult to find the great recipe. Ayam karamel nya looks really good. Thanks for your respond. God bless

Hi Marvellina, I love your blog. My husband is a Medanese descent. I am originally from Jakarta, living in Texas. I love Emie and Medan cookings in general 🙂 Do you know by chance how to make nasi ayam Medan? I tried to search it in your blog but couldn’t find it.

Yes, I know nasi ayam Medan. I haven’t cooked it yet though ha.ha… I sure will let you know once I have the recipe up 🙂 Nice to know another Indonesians 🙂

I have just posted the recipe for nasi ayam Medan here: https://www.facebook.com/WhatToCookToday/posts/1593392634047353 I’m not sure if it’s exactly what your husband is looking for, but hopefully it’s close enough! You guys be the judge 🙂

OMG, these crispy pork fat morsels! I ate so many of those growing up (if I could get away with it, my grandma always said I will grow up and get a heart attack). You are right, they are too delicious and if a dish is traditional with them, then you don’t feel like it is right to eat it without them (in Bulgaria they are called ‘pruzhki’). The Medan Hokkien noodles sound amazing. I wonder if I will be able to pick some up on our next trip to the Asian store in Denver. I’d love to try this dish. How different is Medan Hokkien dialect from Mandarin? Probably a whole different animal? So far south from the areas Mandarin is spoken in mainland China. I am always interested in learning about how languages evolved.

Once the fat rendered out I keep them to make stir fry noodle sometimes LOL! That flavor is just amazing! Now I know not only the Chinese eat these crispy pork morsels, the Bulgarian too! High five! I’m not sure if you will be able to find the one that is already made, but you may be able to find the pork fat there in Asian store. I found mine at the local Western chain store that carries quite a bit of ethnic food! The Asian store I go to doesn’t always have it. Hokkian dialect is another animal of its own. There are few words that I’m sure evolved from Mandarin, but it’s different and may sound a bit more “barbaric” LOL!