I don’t cook very often with bamboo shoots, but it’s one of my personal favorites. I won’t eat them plain just like that. But I really like them in noodle soup, Thai-style curries, spring rolls, and stir-frying them with meat. If you buy them “fresh” from Asian grocery store, they have very strong smell that might put you off. They usually need to be boil until soft but still somewhat have that crunchy texture. Once cooked, it won’t put you off anymore. I often buy canned bamboo shoots simply because I don’t have much time to mess around with the fresh ones. It saves me time to do so. I like how they have been cut in strips too. This chicken noodle soup with bamboo shoots and dill lime sauce came about because I have one can of bamboo shoots in my pantry that I was originally going to make some spring rolls with. Never got into that for some reasons. I decided to whip up this noodle soup instead. What makes it extra special is the dill lime sauce. I gotta tell you, I probably ate too much of the noodles because of the sauce lol!! It’s fragrant, sweet, tangy, salty and slightly spicy. So perfect to drizzle over the noodles. I LOVE dill !! Having dill in this sauce is just so perfect. I can see the sauce not only for the noodles, but also for dipping spring rolls, egg rolls, dumplings ? why not !! It’s very yummy! I hope you give this chicken noodle soup with bamboo shoots and dill lime sauce a try! The ingredients aren’t hard to find either. It’s a keeper ! and winter is coming !! (trying to say it in a serious face like Jon Snow did in Game of Thrones lol). This is perfect for the cooler weather !! 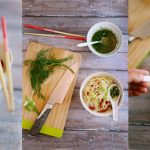 It’s times like these when I wish I had a live-in chef. I’m too lazy to cook and this looks amazing!!

Fish sauce, goji berries, bird’s eyes chili noodles look very oriental. May I know this is from which country?

It’s a little bit of Vietnamese and Chinese 🙂