This recipe is the first thing I learned about Hunan Province in China from Fuschia Dunlop’s Revolutionary Chinese Cookbook. As shared in the cookbook, Hunan lies in southern central China. The province has a southern, subtropical climate, four distinct seasons like we do here in the U.S. and fertile earth. Hunan province is one of the riches agricultural regions in China. Celebrated local products include wild turtles, citrus fruit, bamboo shoots, many varieties of fish, sliver-needle tea, and lotus seeds, and chilies.

You may have heard of Szechuan/Sichuan, but may not know much about Hunan. The Hunanese shares with their neighbors in Sichuan and Guizhou a love of chiles (aha! that explained everything!). The Hunanese though claimed that they are different from them and have their own distinctive ways of using chilies. They actually said the their neighbors in Sichuan and Guizhou use chiles to painful excess, while themselves apply the spice with grace and subtlety. The hotness of chili is often combined with saltiness (from fermented soy beans) and sourness (from black vinegar and preserved vegetables) by the Hunanese.

I had this stereotype myself that the Chinese didn’t know how to eat hot spicy food, of course until I came to know about Sichuan cuisine and now, the Hunanese cuisine. To the Chinese in China, winters are cold and damp, summers insufferably sultry, and Chinese medicine advises that these unhealthy humors should be treated with drying, heating foods like chili that drive out sweat and dampness, and restore the harmony of the body. Chiles are also thought to whet the appetite (I second this one!), and have a vital and almost spiritual importance for many local people. It’s like an opium addiction and strangely enough, I find that so true! It’s painful hot and I want it more!!!

But contrary to popular stereotype both in China and abroad, Hunanese cooking is not always fiendishly hot. Hunan is a region of bold spicy tastes, but also of soothing slow-cooked stews, delicate vegetables, delicious smoked meats, and refreshing stir-fries. Thank you Fuschia, for a great story behind the great dishes. I love this cookbook by the way!!

The first recipe I tried from the Hunan province was this spring rolls with three silken threads. Spring rolls are common street foods in China, which is, of course, also very popular in the Western countries now. This spring rolls with three silken threads or known as “san si chun juan” (三 絲 春卷) are of Hunan specialty. They are served as part of “small eats” (xiao chi) or what we called a snack.

They are called three silken threads because the filling consists of three ingredients cut into long threads. Stuffed with bamboo shoots, smoked bacon and Chinese chives, these spring rolls are highly delicious. Tried the vegetarian version too, which substitute the smoked bacon with shiitake mushrooms and it is also highly delicious. I got my husband addicted to this spring rolls. I’ve tried stuffing it with asparagus and green beans too on different occasion and they are so yummy!

This spring rolls with three silken threads are fried twice and you know what that means! Super CRISPY spring rolls! Tried them and I know you will love them like we do!

This recipe and part of the story are adopted from Revolutionary Chinese Cookbook by Fuchsia Dunlop, published by Norton (US)/Ebury Press (UK). www.fuchsiadunlop.com. 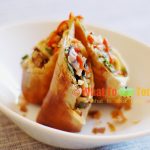 The first frying can be done early, and spring rolls can also be frozen at that stage. When ready to use, it goes straight from frozen to the deep-frying. DO NOT THAW them. You can also substitute the shiitake mushrooms with: green beans, asparagus or other long-shape vegetables of your choice. Blanch them in boiling water first and then follow instruction on the rest of the recipe
Tried this recipe?Mention @whattocooktoday or tag #WhatToCookToday