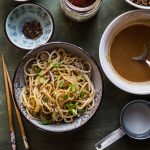 Dan Dan Mian (Spicy Szechuan Noodles) is one of my favorite noodles tossed in spicy sauce and topped with minced/ground meat and numbing Szechuan peppercorns. You probably see dan dan mian on the menu in a Chinese restaurant, especially Szechuan restaurant. I never knew about it until I moved to Minnesota (strange isn’t it ?). But I was in love with dan dan mian ever since. I love chewy/firm noodles to be used in dan dan mian. My kids love dan dan mian too but I skip the chili oil when making it for them. They still love the sauce. Let me warn you though, if you have never had Szechuan dishes before, some of the dishes can have quite a bit of chili oil in them (like literally floating on top of the dish). They may look somewhat daunting and scary with the sight of red and super oily, but that’s the way they are 🙂 Original idea for this recipe was from A Taste of China by Ken Hom. I’ve adapted it to make it closer to the taste of the dan dan mian we ate at the our local Szechuan restaurant here. They use bean sprouts with the dan dan mian at the restaurant, which I think is such a good pair !!

This is one of the noodles that I can eat at room temperature and cold (like out from the fridge). I kinda like it at a cold side actually 🙂 Just love it when the sauce clings to the noodles Chili oil (recommend to prepare ahead):