I’ve made banh mi from scratch before and it wasn’t terribly hard or complicated. But if I can make a “cheat” version… (With two young kids around and lots of other things to be done), well, why not ? I was inspired to make a cheat version when I saw these beautiful demi baguettes at costco. I have serious weakness for bread too people!!! The smell of baking bread is enough to lure me into doing something I don’t want to do (I never told my husband this, but if he reads this, well, no more secret!). The funny thing is, I used to hate baguettes !! Who ate something so hard it could break some teeth seriously !!! But I was turned around after I was introduced to banh mi sandwich more than one decade ago. Ever since then, I seem to have a thing for crusty and rustic looking bread with soft and chewy inside (who doesn’t ? ) Look at these devils !!! All crusty and chewy on the inside !! I’m a terrible baker (no secret on that one), but I love bakeries and patisseries (period). So, anyway, back to the demi baguettes. Those things just stared right at me, asking me to pick them up and so I did. Not sure what to do with them at that time. Then walking down a bit further, I saw the delicious all-natural roast beef. The next thing I know, it’s in our shopping cart. I got home and decided all these stuff were just so perfect for a cheat version of banh mi !! 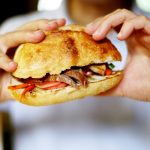 Another great substitute for the roast beef is rotisserie chicken. That will make one heck of a banh mi too !
The version I made for my kids are to split the baguette horizontally like a regular sandwich and omit the chili. Once the sandwich is assemble, I cut it into 3 equal portion. It's easier for them to manage
Tried this recipe?Mention @whattocooktoday or tag #WhatToCookToday SHREDDED PORK AND BEEF WITH CHIPOTLE AND TOMATES...

How To Make Zha Jiang Mian (Noodles in Meat Sauce)