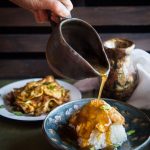 Seafood Egg Foo Young with Gravy is an Asian-American style omelette made with crab meat and other seafood and some vegetable. Egg foo yong is often served with thick gravy. A perfect easy Asian recipe you will love. 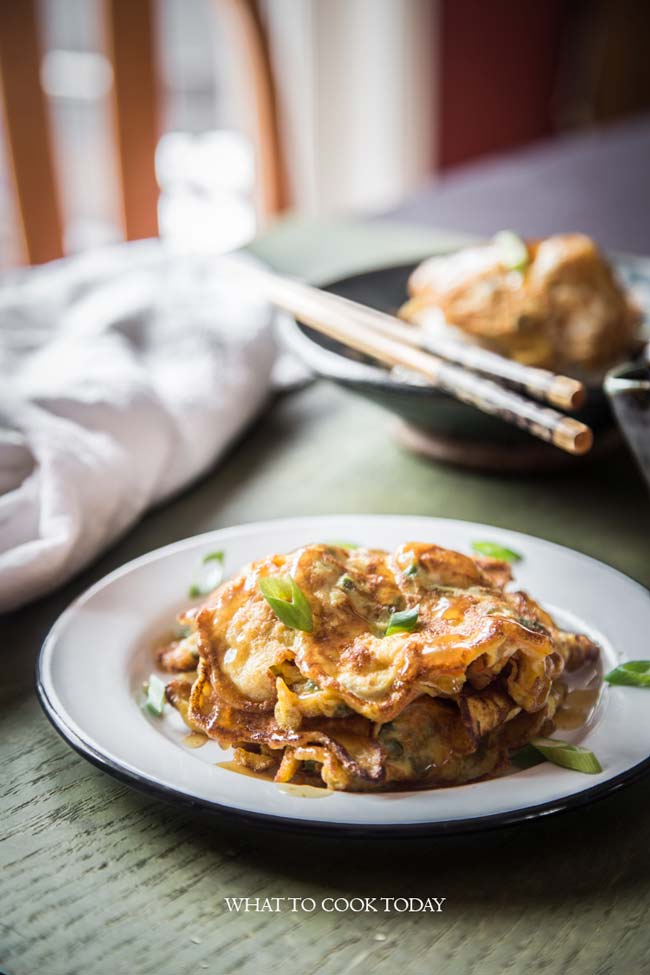 WHAT IS EGG FOO YONG?

Egg foo yong (芙 蓉 蛋)/ Fu Rong Dan is an egg dish said to be originated from China. However, this dish is also being enjoyed a lot in other parts of Asia. The egg is usually beaten and mix with meat and/or seafood and some vegetables and then fried until puffy. It’s more of a large size puffy fried eggs rather than omelette if you ask me. 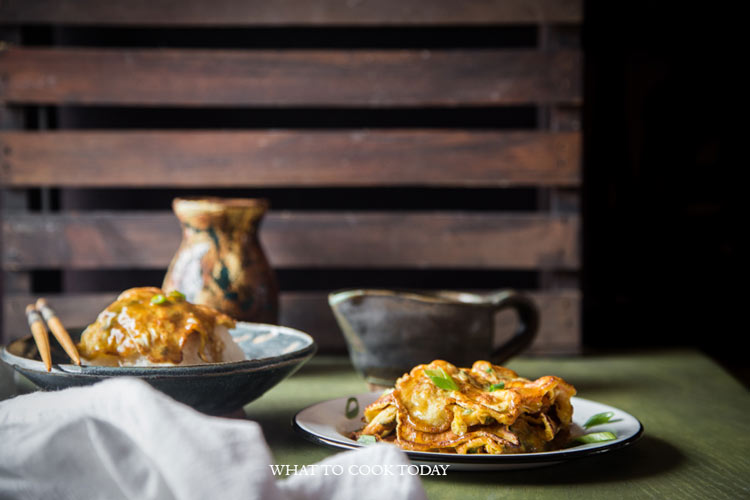 Traditional egg foo young usually isn’t served with gravy. It is served as is. The Asian American version comes with a gravy. I didn’t know about this until I saw how it was served in Chinese restaurant that serves Asian American cuisine here in the U.S. 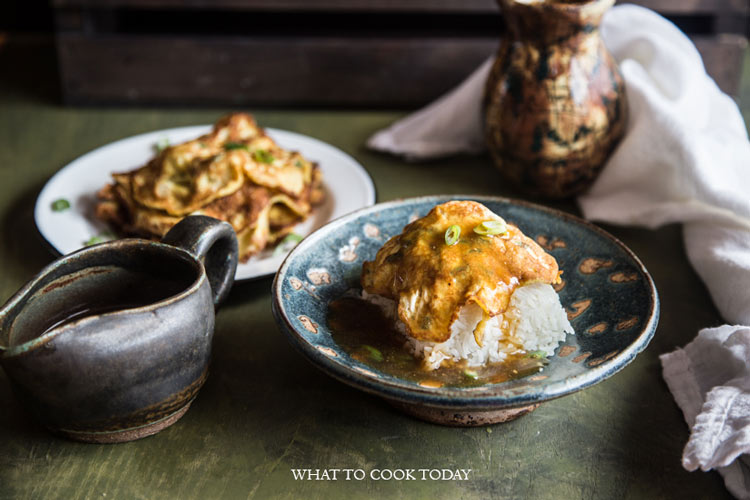 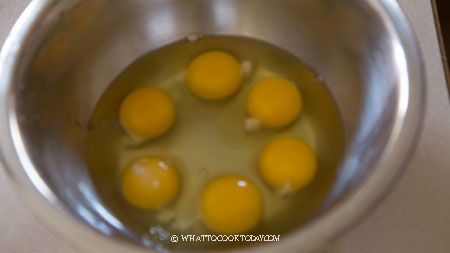 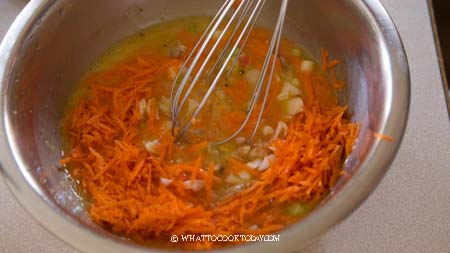 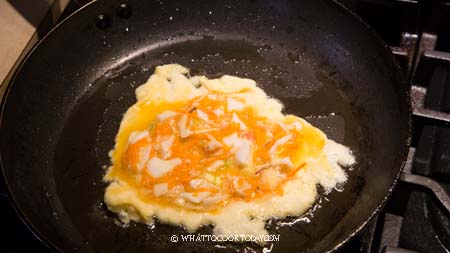 4. When the bottom of the egg is set, about 3 minutes or so. Gently flip it over and cook for another 2-3 minutes or until the eggs 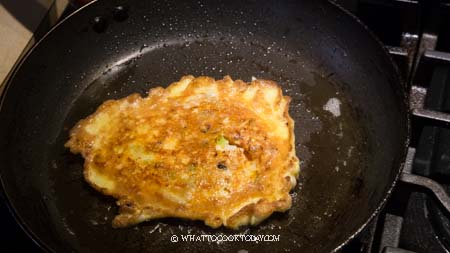 5. To prepare the gravy, mix all ingredients in a saucepan and stir until smooth and then put on the stove and cook over medium heat until the gravy is thickened 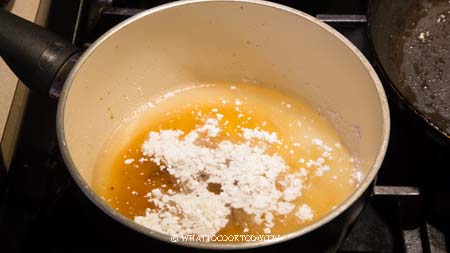 6. To serve, drizzle the gravy over and garnish with chopped green onion 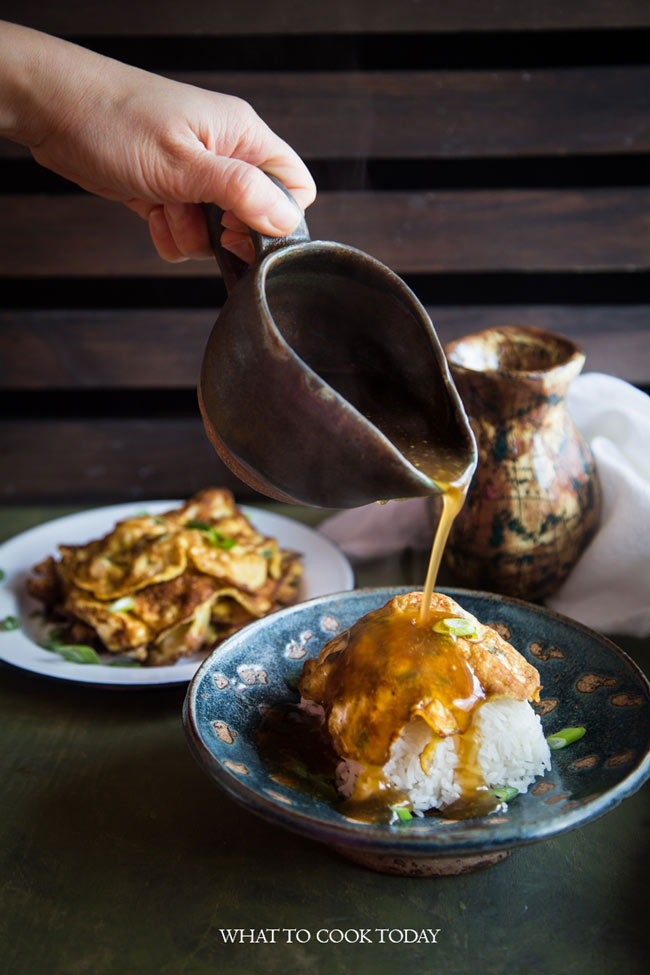 1. Combination of ingredients
Egg foo young often has this combination: protein (meat/seafood) + veggies. You will commonly see seafood like crab meat lumps and/or shrimp + veggies like shredded bean sprouts, shredded carrots.
2. Cook the protein separately
If you choose to use raw meat like chicken or pork or seafood like shrimp, cook them first. The eggs do not take long to cook and so we don’t want to end up with uncooked protein in your egg foo young.
3. Don’t be skimpy on the oil
You seriously cannot just pan fry the eggs with just a smear of oil. If you want a really puffy and crispy on the edge egg foo young, you need that oil. It’s not really as much as deep-frying, but you need that oil to cook the egg foo young properly.
4. Cook in batches
You can pour in all the egg mixture in one go, but you probably will have a hard time cooking and turning it later without breaking the egg foo young. I’m not a pro so I decided to cook this in 3 batches. You can probably try 2 batches too. It’s more manageable IMHO.
5. Whisk the gravy ingredients really well
The gravy contains cornstarch, which acts as a thickening agent. Make sure you whisk it well before pouring into the saucepan to cook AND while you are at it, do not stop stirring until the sauce has thickened
6. Pour the gravy over only when you are ready to serve 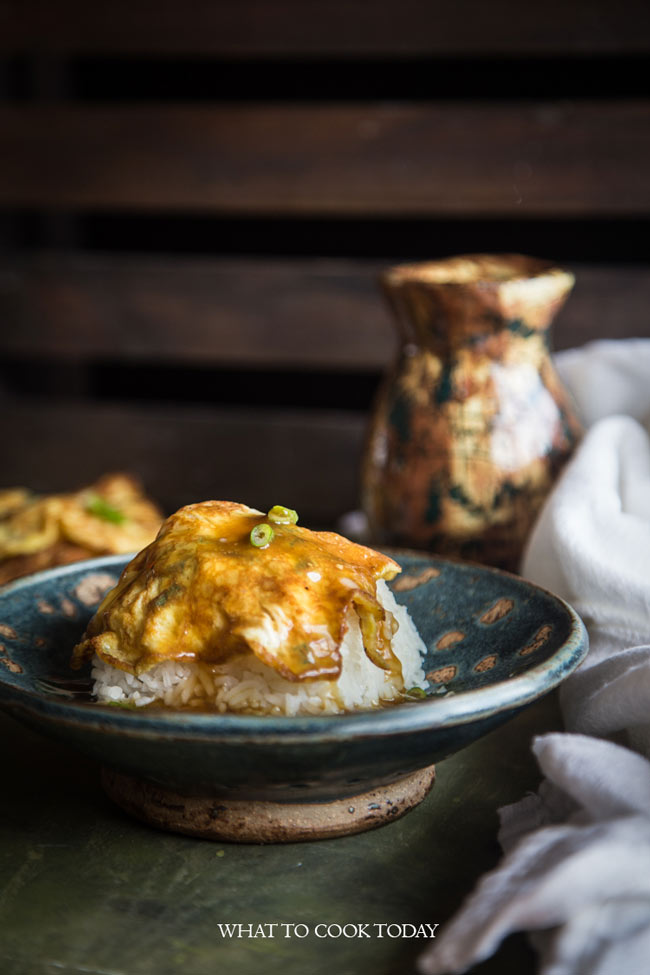 VARIETIES YOU CAN DO WITH EGG FOO YOUNG

1. Use pork or chicken
Use about 100 gr of pork tenderloin or boneless skinless chicken breast/thighs. Cut them into small bite-size and marinate with 1 tsp of soy sauce, 1/4 tsp of sugar, 1 tsp of sesame oil and then stir fry them briefly until cooked through
2. Other vegetables you can use
I suggest to use only 1 or 2 varieties of veggies and keep it simple. Choices can be shitake mushrooms (soaked and thinly sliced), shredded cabbage, mung bean sprouts, shredded bamboo shoots

DID YOU MAKE THIS EASY SEAFOOD EGG FOO YOUNG RECIPE? 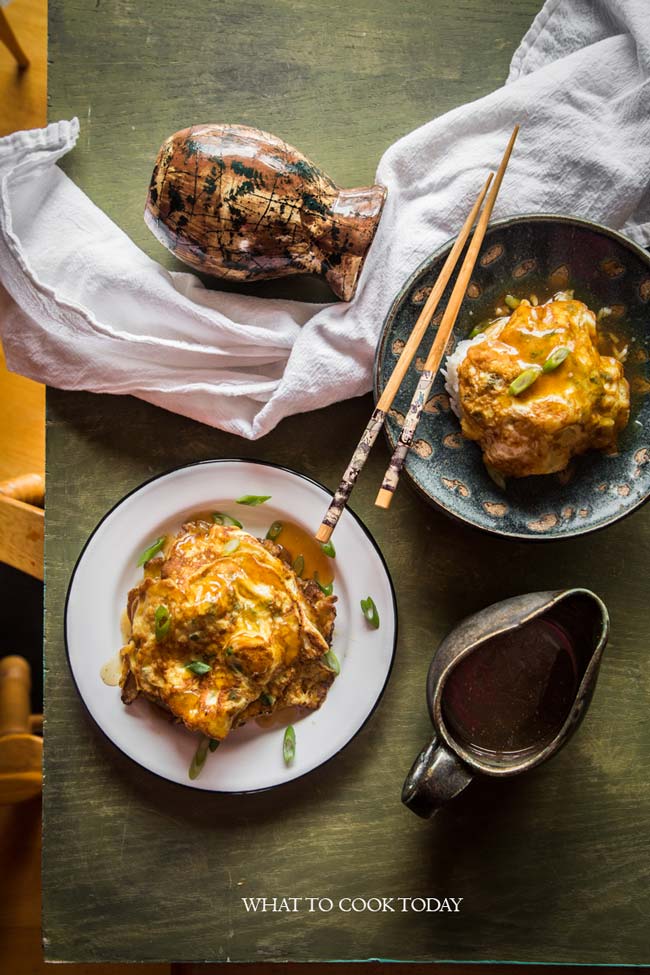 Eggs in tomatoes and green chilies and kitchen...

Could I omit chicken stock for vegetable stock

In step two of “cooking the eggs you say to flip the eggs “until the eggs”, but you don’t say until they what. I assume it’s until they’re fully cooked, but you may wish to fix it.

Hi James, Thank you for pointing that out! For some reason, the rest got deleted. I’m glad you caught that!

I tried this recipe weeks ago and was very impressed with my results, given that it was the first time I had attempted this kind of cooking! I thought I had saved it and was miserable for losing it – until now, because I just found this page again! Thankyou so much for sharing your wonderful recipe – I really loved the gravy and I’m making it tonight again 🙂

I’m so glad it turned out great for you and you like the gravy! Thank you so much for letting me know 🙂

I’ve eaten egg foo yong at restaurants before, but I hadn’t even thought of it as an omelette because of the gravy. It’s always been delicious, so maybe I should try making it myself. It’s been a while since I’ve had anything like this and I have a lot of eggs in the fridge that need to be used.

Let me know how like it if you ended up trying the recipe 🙂 Thanks for stopping by !