Instead of getting the store-bought birthday cake, which we usually ended up wasting half of it, I decided to make this mini five-spice flourless chocolate cakes to celebrate my husband’s birthday and they were pretty well received. 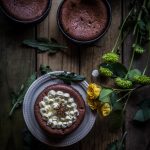 The richness of the mascarpone cheese and heavy cream are balanced by the “bittersweetness” from the chocolate and cocoa powder. I love the aroma of the five spice powder infused into the cake. It is quite a dense and rich cake, a little piece does fill you up quickly! How To Make Soft and Fluffy Hokkaido Milk...

Easy and Quick Baklava (Without Butter/Ghee)

BANOFFEE PIE FOR THE BIRTHDAY BOY

I love using Chinese Five-Spice in unexpected recipes. I can imagine it must be really tasty with chocolate. I am so curious now! Guess I just have to make this cake. 🙂

I am definitely trying this. How does it taste?

Hi Soe. It’s moist and rich. My husband thought the mini cake was not going to fill him up. Boy was he wrong. Just 1/2 of the mini cake and he said that really was rich LOL !