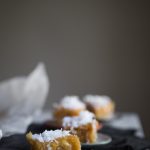 Getuk Ubi Kayu/Singkong Gula Merah (Pressed Cassava Palm Sugar Cake)- Cassava/tapioca is boiled and then mixed with palm sugar/coconut sugar, grated coconut and then pressed onto a pan and sprinkle with grated coconut. Something so simple yet loved by many in Indonesia. 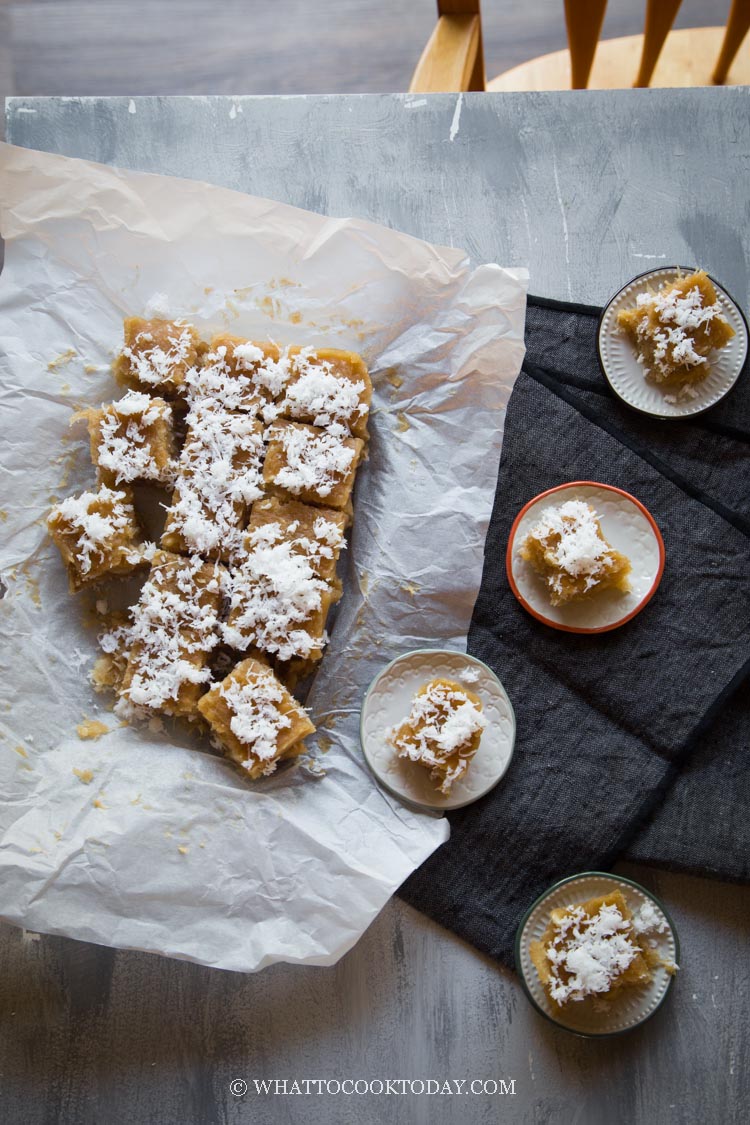 Getuk singkong gula merah is one of my most favorite kue ever since I was a little kid. Singkong means cassava/tapioca in Indonesian. Gula merah is palm sugar/coconut sugar. Kue is loosely translated into cake, not the type of cake you would imagine, with frosting etc. Getuk is considered one of the kue basah (“wet” cake). Kue basah is named as such because the kue is usually moist compared to kue kering (“dry” cake). Most of the time kue kering are baked. Kue basah usually steamed and sometimes boiled, or baked too.

HOW GETUK UBI KAYU IS MADE

Getuk singkong is made by boiling cassava root until tender and then mashed and mixed with grated coconut, palm sugar, white sugar, and a bit of salt while hot. The mixture is then pressed and packed into container and cooled down until it is firm enough to cut. It is a very cheap kue but highly popular street food and kue in Indonesia. Getuk is undeniably, one of the easiest Indonesian kue to make. 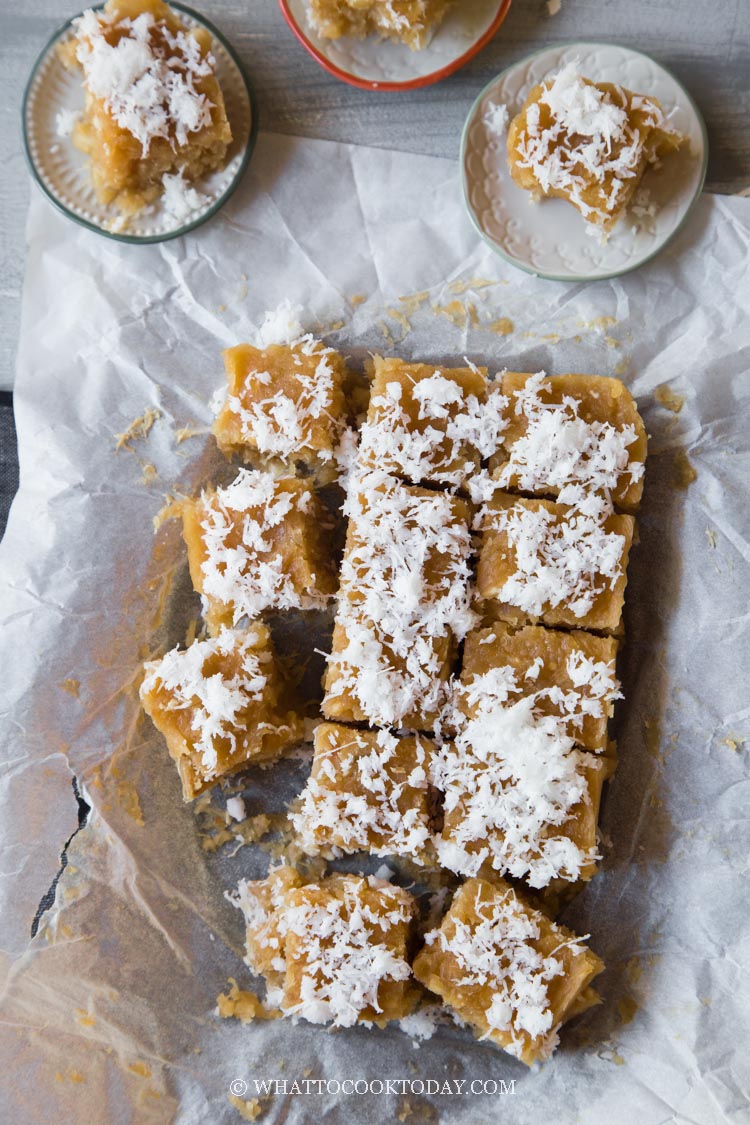 HOW TO MAKE MOIST AND DELICIOUS GETUK

1. Use sharp knife to peel off the thick skin of cassava
2. Cut into 2-inch pieces
3. Place cassava pieces in a pot and cover with water 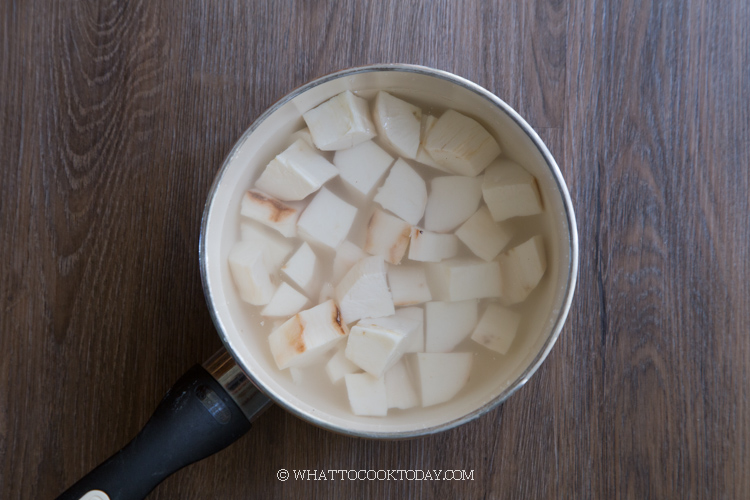 4. Boil until really tender. Discard the boiling water completely after that

5. Place the rest of the ingredients into the hot cassava pieces 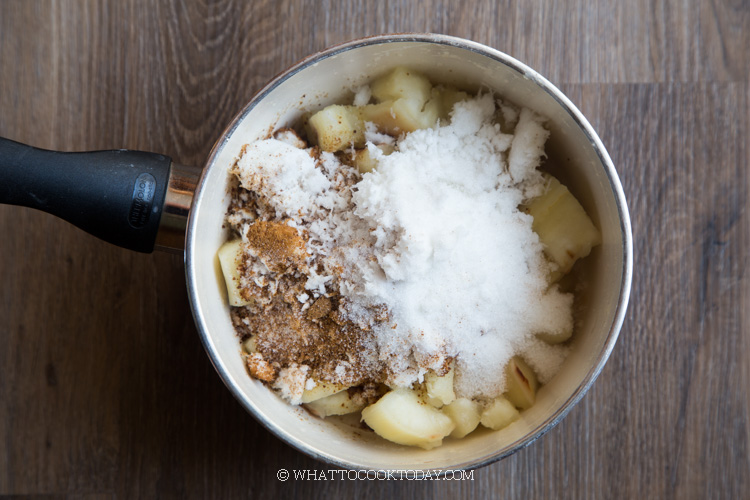 6. Mash everything until the sugar is melted and you get a pretty smooth mixture 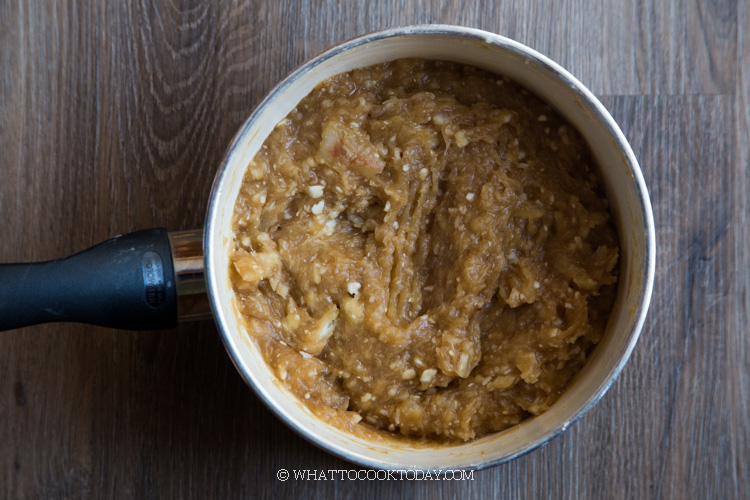 7. Line the container with parchment paper overhanging on the sides. Pack this mixture into a container and really pack it down 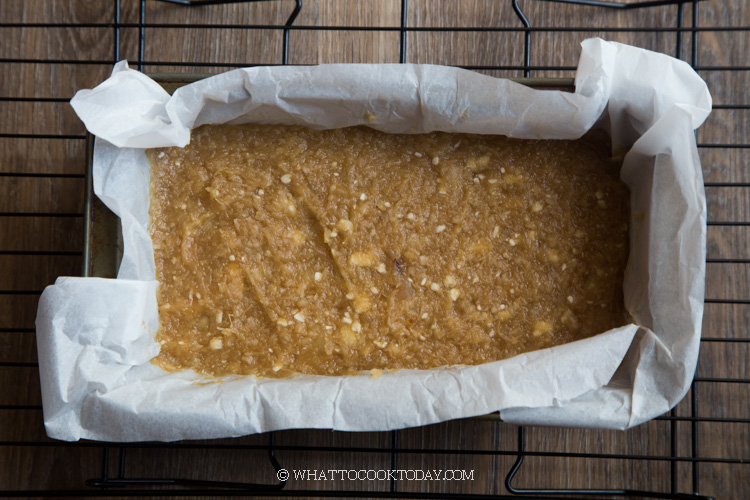 8. Let it cool down for at least 3 hours before attempting to cut 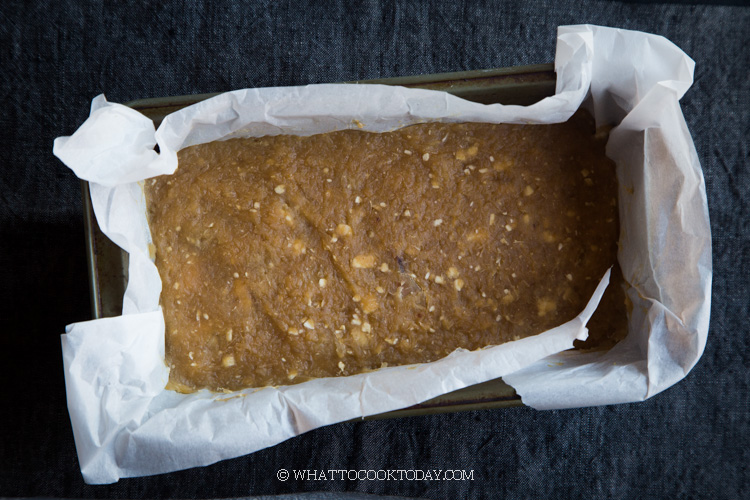 TYPES OF CASSAVA TO USE FOR GETUK SINGKONG 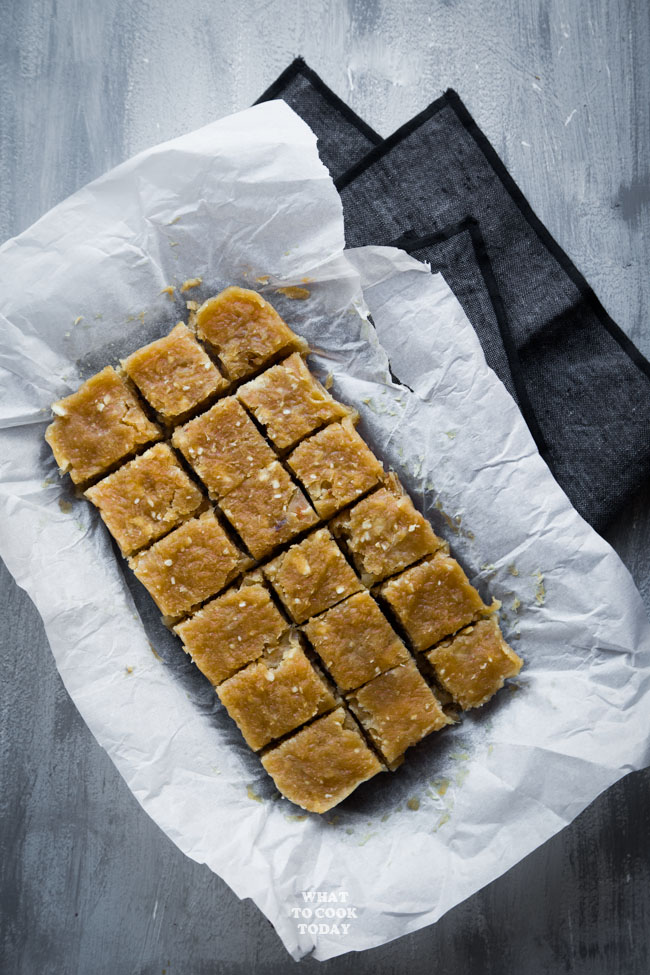 HOW TO STORE AND REHEAT GETUK SINGKONG

Kue basah (wet cake) doesn’t keep as long at room temperature, especially if humidity is high where you are. If it’s not humid where you are, you can keep this at room temperature for 1-2 day max. After that, they need to go to the refrigerator. They can be kept in the refrigerator for up to 5 days. They can be reheated in the microwave just until warm enough, not hot or you can use steamer to reheat.
Freezing the cake is not recommended as it will definitely change the texture of the cake. 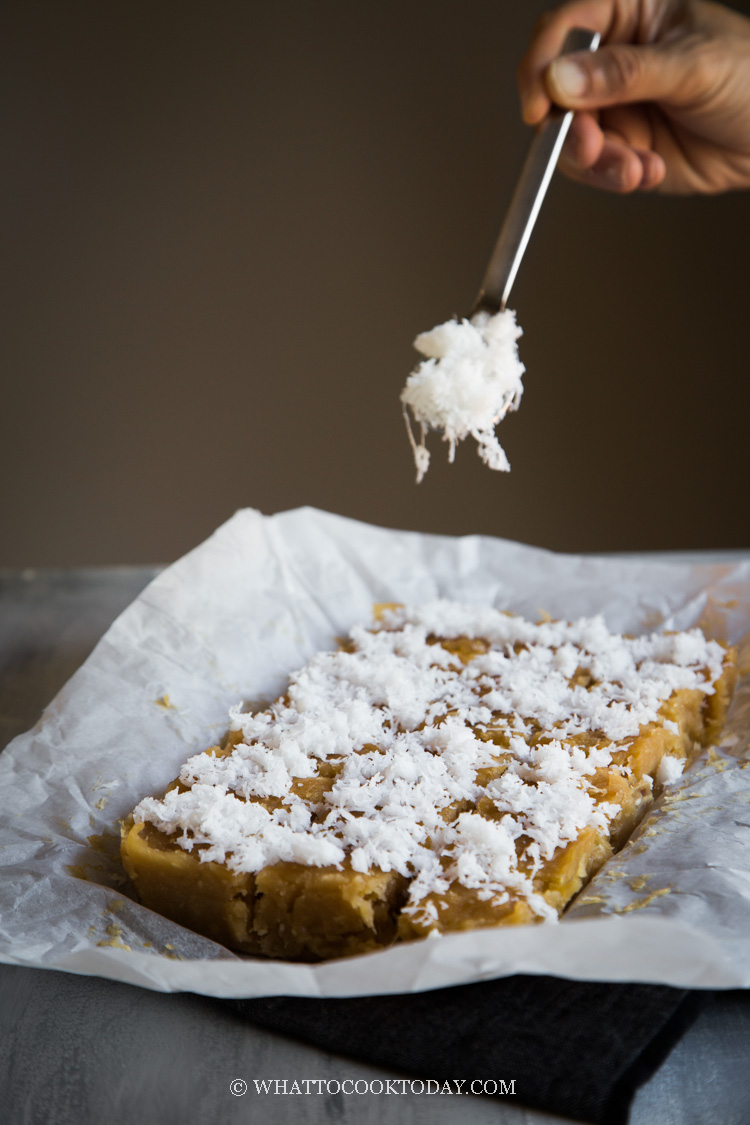 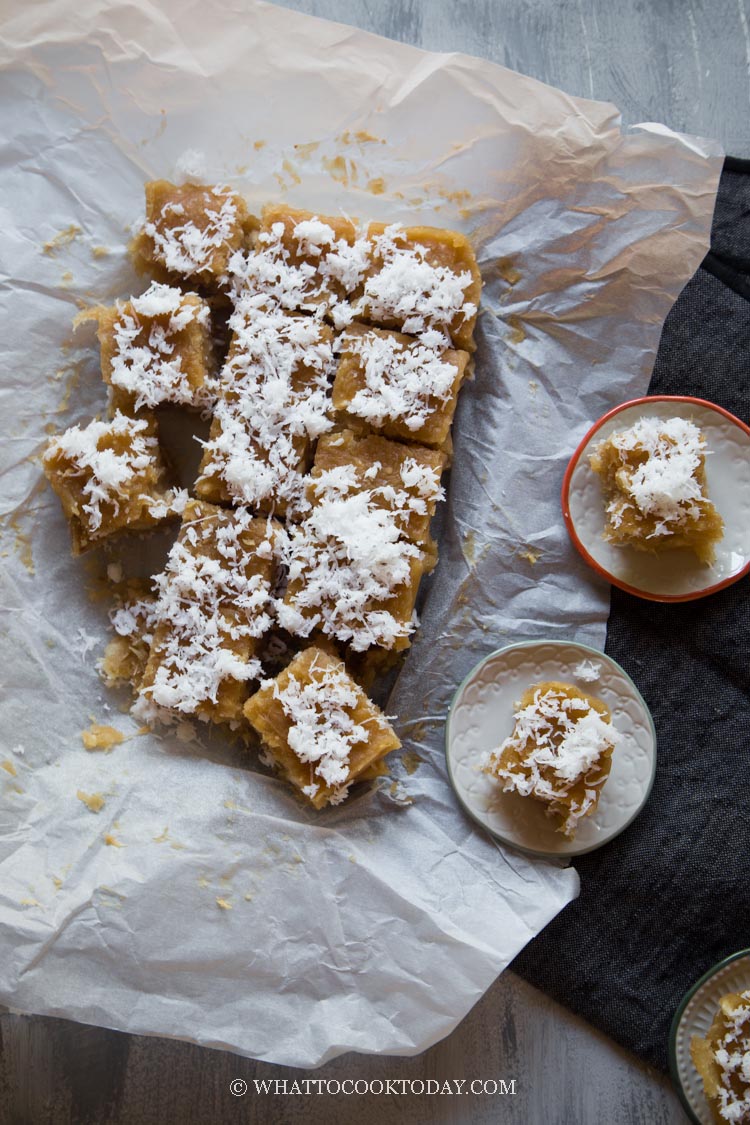 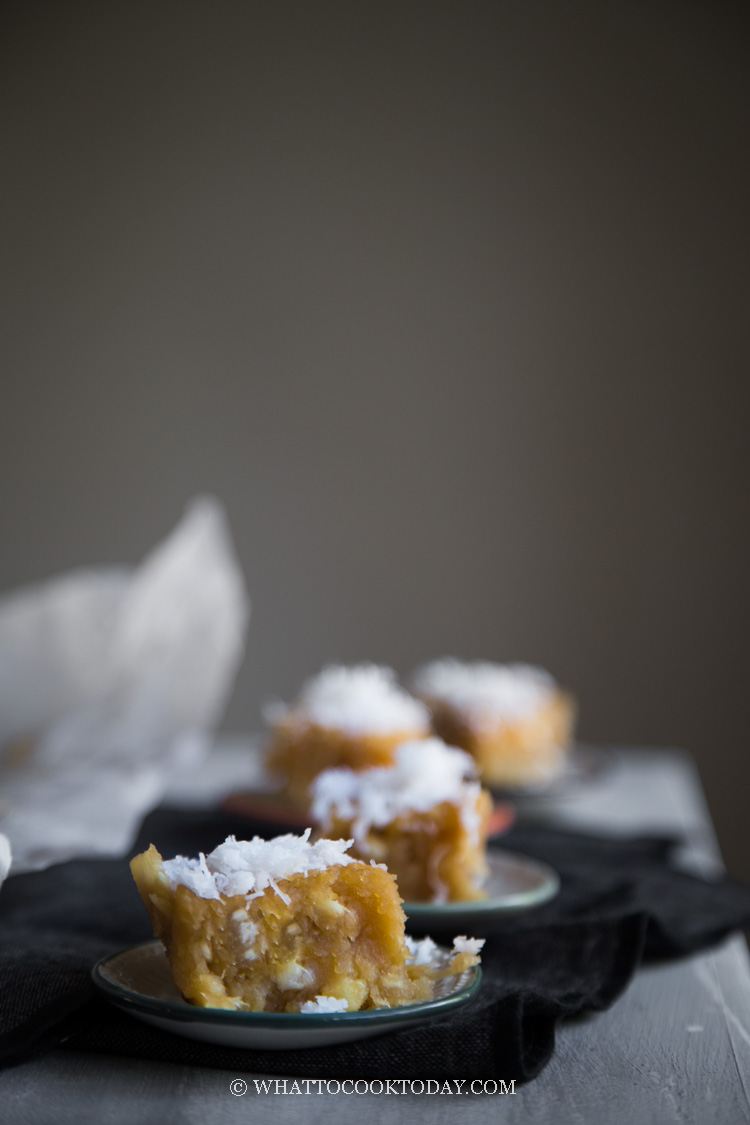 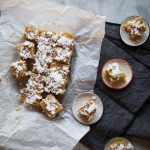 The grated coconut topping need to be steamed or raw as is ?

Hi Suri, they need to be steamed for 10 minutes.

Hi, Marv
Can I leave the Getuk Singkong on the table to cool for 2 hrs n put it into the fridge for another hr?
Thanks

Hi Lilyn, yes you can leave the getuk to cool down completely at room temperature for 2 hours or longer, then transfer to the fridge. There’s one time I forgot to put it in the fridge and it was left out overnight LOL! but it was okay 🙂 As long as it’s not so humid where you are.

I think I will use frozen singkong to try on… 🙂

Hi Marvellina – Can I use frozen singkong?

Hi Linda, I have yet to try it with frozen singkong. I’m not sure how much that would affect the texture of the cake. I’ve used grated frozen singkong before and didn’t like how it turned out. I will experiment with the frozen singkong sometime next week if you can wait 🙂

Hi Linda, just to let you know that I just made the getuk again today with frozen singkong and it turned out great too 🙂 So, the answer is yes!