Karelian hot pot or known as Karjalanpaisti in Finland, is one of the national dishes in Finland. Originated from Karelia region, this stew is usually prepare with at least two different type of meats, usually beef and pork, but lamb is also common. The stew was traditionally prepared with wood-burning ovens in Karelia and Karelian hot pot is usually prepared after bread had been baked and the leftover oven heat was utilized to slowly cooked the hot pot. This reminds me of the preparation of Cholent-Asheknazi Hamin by using residual heat.

The hot pot is seasoned with several ingredients such as bay leaf, allspice, salt and onions. Like most other Karelian foods, the Karelian hot pot is traditionally cooked in a pot placed inside an oven. In Karelia, it is usually referred to as just ‘oven stew’. The term Karelian hot pot can be used to refer to nearly any food that contains meat and that is prepared in this traditional Karelian fashion.

I find this Karelian hot pot very easy to make and it’s mind blowing that I didn’t put many seasonings in the cooking, other than salt and bay leaf and it turned out so delicious. The meat are cooked in its own juice and they are so tender that they just melt in your mouth!! The only thing about preparing it was, having to wait and waiting can be a pain sometime lol! The cooking time is pretty long, about 5 hours, but it does worth every second of it. Recipe is adopted from The Best Of Finnish Cooking by Taimi Previdi. 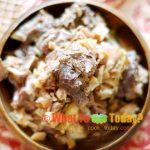