I know very little about the Middle Eastern food, well, other than hummus, pita bread, pomegranate and kebab, and the fact that Mediterranean diet has been in the health trend for a while now, I honestly not sure if I know anymore beyond that. When I saw this The Book Of New Israeli Food cookbook by Janna Gur, I was so intrigued to give the recipes a try. In her cookbook, Janna Gur did mention that twenty to thirty years ago, tourists only experience good hummus in the Old City of Jerusalem. Today though, tourists are in for big surprises. Israel is like a melting pot. Internationally trained chefs fused classic cooking techniques with those of the Middle East. Working with local ingredients, they embellish their menus with dishes adapated from their family heritage, be it Moroccan, Persian, Hungarian or Turkish. In less than thirty years, Israeli society has graduated from Spartan austerity to a true gastronomic haven.

With all that said, it only makes sense if I do experiment with Israeli and its neighboring countries’ cooking at my home kitchen. The first thing I made was Labane or known as yogurt cheese. I’ve never made my own cheese in my entire 32-years of life so far. Making a cheese is like something that I see at iron chef show on food network. Labane is often called Greek cheese as well. It is sour and creamy at the same time. It is super easy to make. I did not use sheep milk though, I used whole cow’s milk. I was just so impressed that I actually made some yogurt cheese lol! Labane is great with salad or fruits. 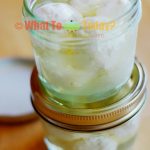 CHICKEN AND KALE RISOTTO WITH PINE NUTS AND BACON