I decided to pack my kitchen with me and head to Norway for an adventure. Just kidding! I’m still physically here, but we did have some cooking adventure trying out several Norwegian dishes with Authentic Norwegian Cooking by Astrid Karlsen Scott . It’s interesting how much you can learn and get to know a country just by cooking its dishes.

I’ve came to know by now (after over 600+ recipes of course!) that weather and geography (in some cases, politics) DO influence cooking A LOT! Norway is one of the example. A beautiful country covered by snow more than six months throughout the year with only 3 percents of its land usable for cultivation. Here I am complaining about how bad the winter is over here and how much I dreaded it, but at least we’re not covered in snow for that long and we’ve got plenty of ingredients to choose from!

Like many other countries across Europe with harsh winter, Norwegians have learned to preserve food as well, few of the best examples are the cheese, sour milk, cured meat and fishes. Flipping through the cookbook, I also see a pattern I’ve seen in other European cookbook for example from Germany and Finland, stew and casserole are also major players in their cooking. I don’t see what not to love about stew and casserrole type of dishes too. You cook in big bulk, you can eat for few days. It’s economical and satisfying!

This lamb and cabbage or known as farikal in Norway is Norway’s national dish. The Norwegian like to prepare farikal to welcome the sign of fall season. Farikal is prepared with only several ingredients but make no mistake, it is one of the best I’ve ever tasted though. The Norwegian like to include whole black peppercorns in this dishes, many of them as a matter of fact! It’s the tradition to prepare it that way. The whole peppercorns hidden in between the meat and cabbage, so you are bound to bit into one for sure. I like that. I know some people may not be fans of eating whole peppercorns. If you find that a nuisance, you can always wrap the peppercorns in cheese cloth while cooking so you don’t have to pick it out one by one. Other than that, this dish is so easy to make and couldn’t be more satisfying to you tummy, heat and soul! 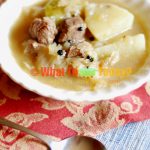