Home >> All About Noodles >> Painting pumpkins, Halloween costumes and then pumpkin ramen

RECIPE
“Okay….painted pumpkins..checked! Halloween costumes…checked. Food ? well..well, I gotta share with you this pumpkin ramen that I tested out few days ago. Iven absolutely loved it. I think this guy just digs pumpkin soup/stew. This may sound entirely foreign to you, but execution wise is really not difficult. I promise”

Iven is 5 days away from turning two. Watching and listening to this little guy talking is an entertainment of its own. Everywhere he goes these days, he’s shouting “PUNK KING..PUNK KING…mama…PUNK KING” (read: Pumpkin). It’s pumpkin season alright. I got that!! They are everywhere. I never painted or decorated pumpkins until last year. It was my first time I actually painted on pumpkins. I actually painted all the characters that my girl requested : I managed to finish painting the pumpkins few days ago. This year, I’m wiser (or lazier ?). I didn’t “comply” to all the request. If I did we may end up with probably 10 pumpkins with princesses on all of them !! Ever since the movie Frozen was released, Fiorina has been obsessed with princess Elsa. She makes sure I’m aware of that almost everyday (to this date). Unfortunately, the mom was a little bit behind in catching up with what’s new out there last year. Not sure why. I was still unorganized and still adjusting my life with another 1-year old then. I just knew that I wanted to get her a costume. She requested an Elsa costume (surprise…surprise!!). So, we were at Costco and I saw many princesses costume. I picked up the one I thought was Elsa costume. Fiorina watched a little bit of Frozen movie and she didn’t say a thing about the costume! Only excitement on her face. So, few days before Halloween, I let her tried on the costume and send her photo dressed up in the costume to some of my family and friends overseas. Like many moms out there, I was a proud mama to a beautiful princess Elsa. Then a message came in “Fiorina is so beautiful in her Brave princess costume”. Brave ? What do you mean Brave ? It’s an Elsa from frozen I thought. Then this silly mom googled and realized that she bought princess Merida costume instead ! I know…you can shake your head at this point! I’m helpless!!! I dared not tell her about the mistake, but decided to spill the beans. She said “I still like this dress mama. I’m still a princess” Awww…..isn’t that girl just sweet !! Iven was only one year old at that time and I didn’t really dress him up in costume. Boy..I just missed those chubby cheeks!! Well, if you think she’s going to be a Cinderella this year, well, guess what..you are wrong (I was wrong too!). Change of heart (surprise..surprise!!) and she said she wanted WINGS ! “But honey…we already painted Cinderella on the pumpkin. I thought you were going to be Cinderella” I said. “But I really want wings” said dear daughter. So, we ended up with a different costume now and it’s half the price of Cinderella !!! Well, call me cheapo, but that’s probably the only reason I let her change the costume and return the Cinderella back to Costco. If she changes her mind, I’m going to ask her to wear her pajama as a costume. Like I did with my first Halloween party when I was 18 years old !! On the other hand, Iven doesn’t give a hoot what he’s going to be on Halloween. Let’s see if we can manage to get him look like Bob the Builder!!

Okay….painted pumpkins..checked! Halloween costumes…checked. Food ? well..well, I gotta share with you this pumpkin ramen that I tested out few days ago. Iven absolutely loved it. I think this guy just digs pumpkin soup/stew. This may sound entirely foreign to you, but execution wise is really not difficult. I promise. Miso is very widely available nowadays. Check your local whole food store, I’m pretty sure they have it. If you can’t find any, you can always purchase Miso and red curry paste, and ramen noodles while in your pajama if you feeling fancy! 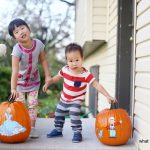 Use only 2 cups of broth for thicker consistency as a soup/stew on its own if you don't want to serve it with noodles
Tried this recipe?Mention @whattocooktoday or tag #WhatToCookToday
0 comment