Palaver sauce has an interesting story behind how this dish is named as such. Learning from the South of Sahara cookbook, the word Palaver comes from the Portuguese word of “palavra”, which means a word, or speech. The negotiation between the Africans and Europeans during colonial times was called a palaver. The word palaver means any type of lengthy discussion.

It is believe that this palaver sauce was prepared during a long village palaver so everyone can enjoy a good meal after a long discussion. Everyone will gather around big pot and adding in their own ingredients in there. Palaver sauce often involved varieties of meat and even fishes, vegetables and whatever that anyone wants to add to the pot.

I noticed that many West African dishes call for okra in the recipe. I’ve learned that the “sliminess” of the okra is especially popular in West African dishes. They love it. This palaver sauce uses chicken, beef, fish, okra, onions, tomatoes, kale and mushrooms. Lots of goodies in there for sure. When they say “the more the merrier”, I think it is true for palaver sauce. 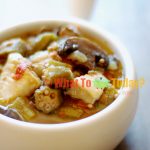 How To Cook Simple Oden and Mala Oden...