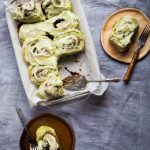 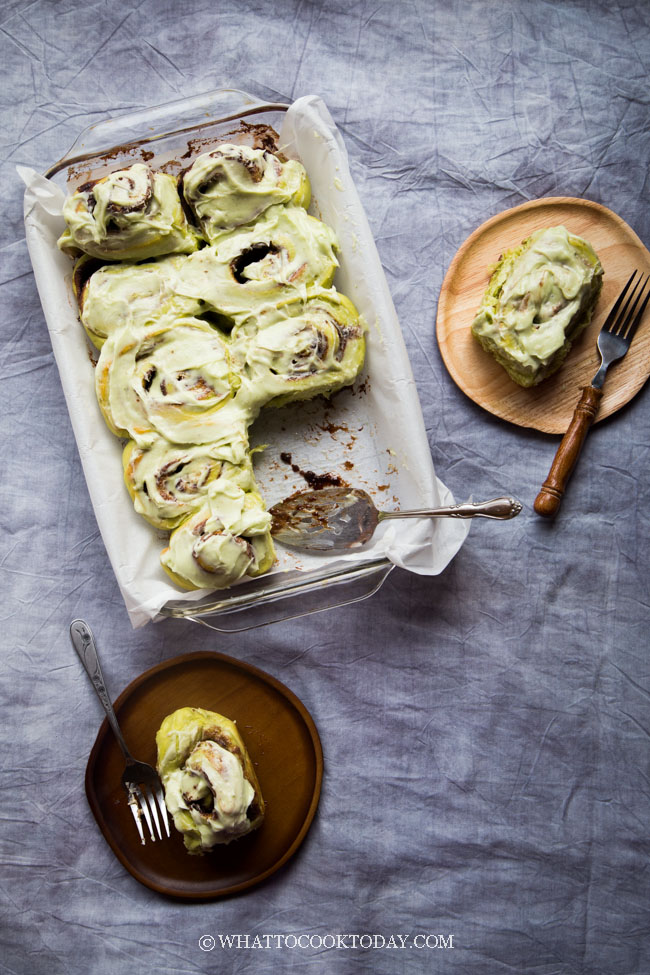 WHO NEEDS CINNABON WHEN YOU CAN MAKE THE BEST PANDAN CINNAMON ROLLS AT HOME
Nothing against Cinnabon really. I love their cinnamon rolls too. I can’t tell you how many times we walked by Cinnabons at the mall and my daughter would beg me to get one of their rolls.
The daughter said “Mama, can we make our own cinnamon rolls one day?” And that question lead to this Pandan Cinnamon Rolls!! I love cinnamon rolls, but I’ve never thought about making my own. I love pandan leaves even more though. The aroma is amazing! seriously amazing!

THE BEST PANDAN CINNAMON ROLLS ARE TRULY THE BEST! NO JOKE!
The family highly approves these pandan cinnamon rolls. I’ve tested several recipes and truly this is the best! Let me tell you why!

1. SOFT AND SLIGHTLY CHEWY
The rolls are so soft yet they have that slightly chewy texture, which the family really loves.
2. THE MIDDLE PART IS THE BEST
I cannot wait to make my way through the middle part of the rolls, which are like the softest ever! I save the best for last.
3. AMAZING PANDAN FLAVOR
I know pandan is like a foreign language (literally!) and foreign ingredient to many American cooks and bakers. This is like the “vanilla” in Southeast Asia. I love the aroma of pandan A LOT! But, if you don’t have any, you can always omit and use warm milk instead to make regular cinnamon rolls. It gives a beautiful natural green color too. 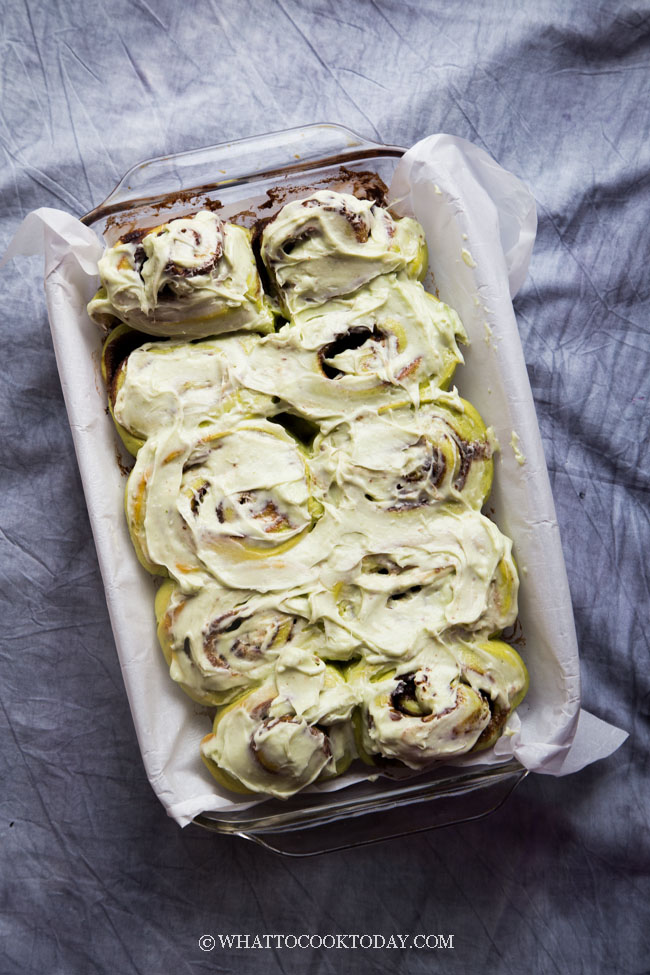 WHAT IF I DON’T WANT TO USE PANDAN JUICE AND PANDAN EXTRACT FOR THIS CINNAMON ROLLS
Then you just make yourself regular cinnamon rolls because this recipe is adapted from the classic cinnamon rolls. Just substitute the warm pandan juice with warm milk and the pandan extract for icing with vanilla extract. Easy peasy!

WHAT IS THE SECRET TO SOFT CINNAMON ROLLS
I used to think I need to use cake flour to make these rolls soft, but nope! This recipe uses bread flour, which according to Ambitious Kitchen, make these rolls really soft and moist. I have to agree. It adds that chewy texture, which is really amazing! 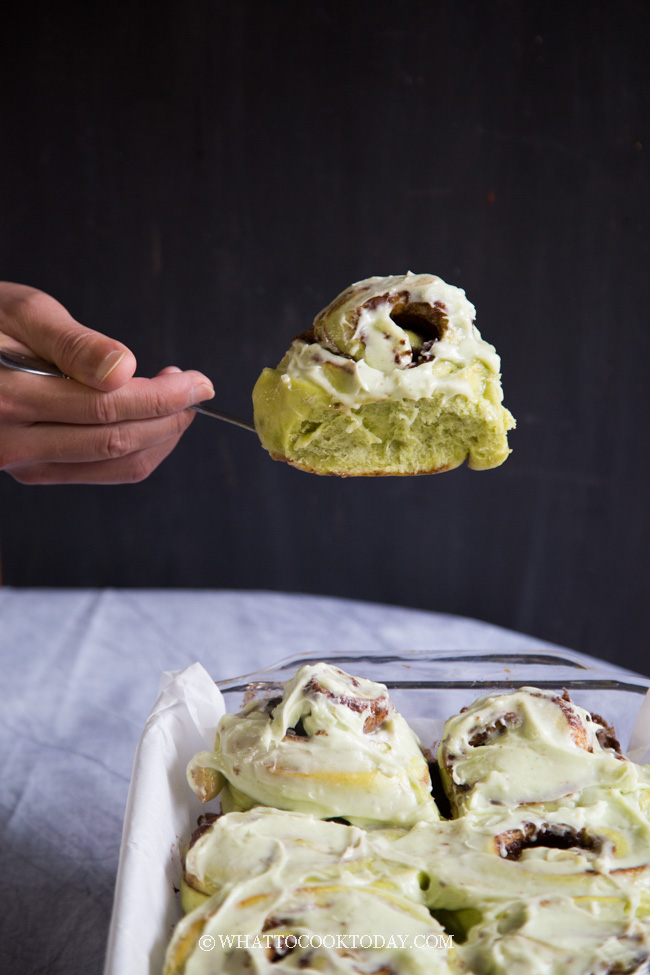 HOW TO MAKE THE BEST PANDAN CINNAMON ROLLS
1. Warm the pandan juice
Warm the pandan juice to about 110F (38C). Take care not to heat it up to much or the yeast will die when you sprinkle them on later
2. Sprinkle the yeast over the warm juice and wait for 10 minutes
Once it turns foamy, you know the yeast is activated
3. Add sugar, eggs, and butter to yeast mixture
4. Stir flour and salt together and gradually add this to the yeast mixture and use dough attachment to knead the dough for 8 minutes
5. Cover and let the dough rise for 60 minutes
6. Prepare filling and icing while waiting for the dough to rise
7. Once doubled in size, use your clean fingers to make an indentation. It should stay. If it is, your dough is ready, if not, let it rise a bit longer 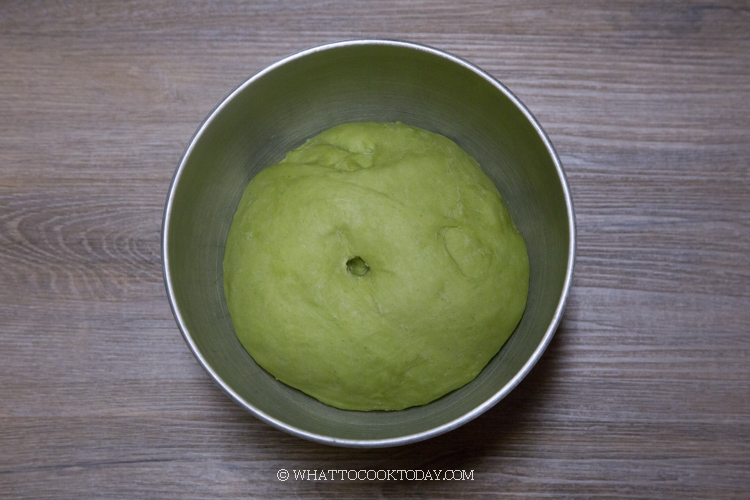 8. Roll the dough
Roll it out into a 9×14 inch rectangle shape 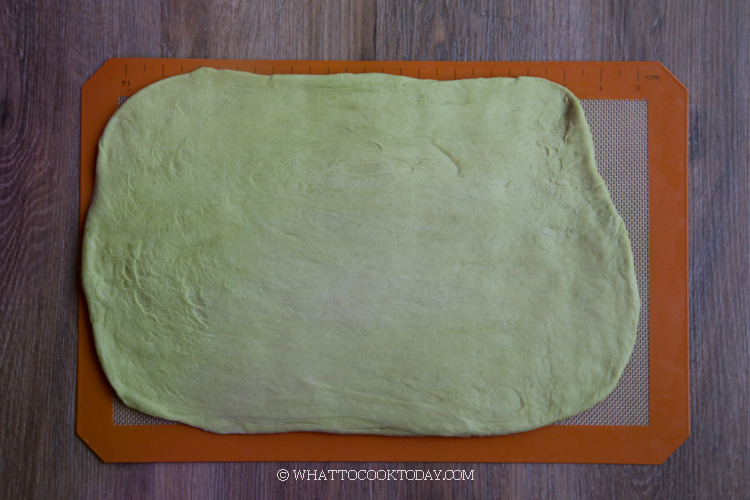 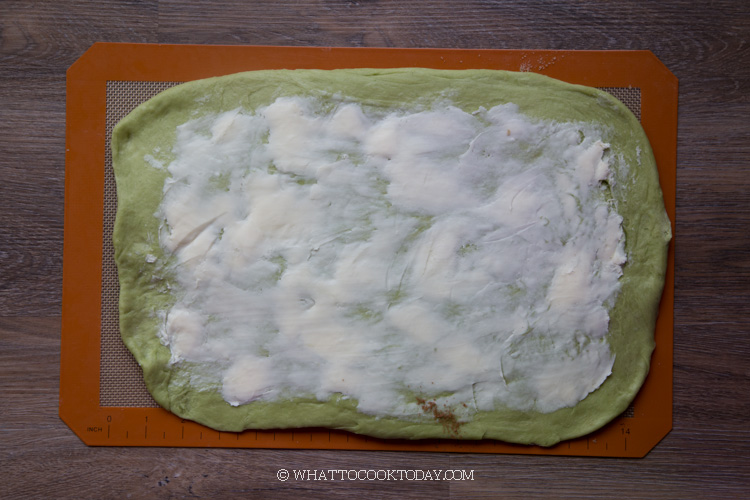 10. Sprinkle the cinnamon sugar mixture
Use your fingers to lightly press it onto the butter 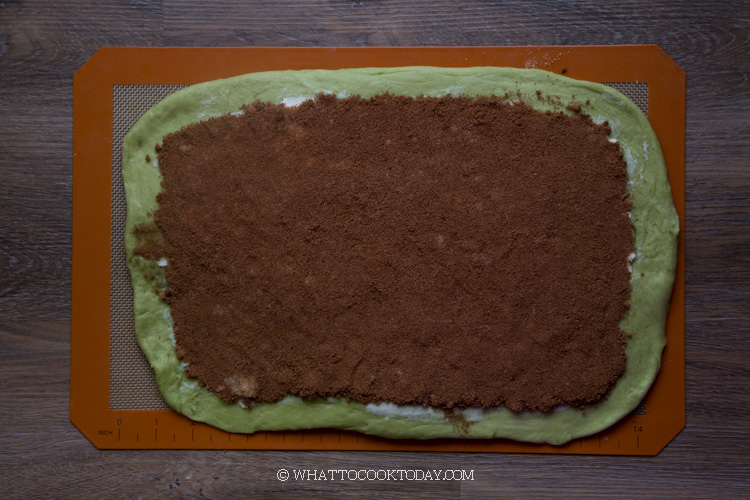 11. Roll the dough up from the short side. Roll it tightly 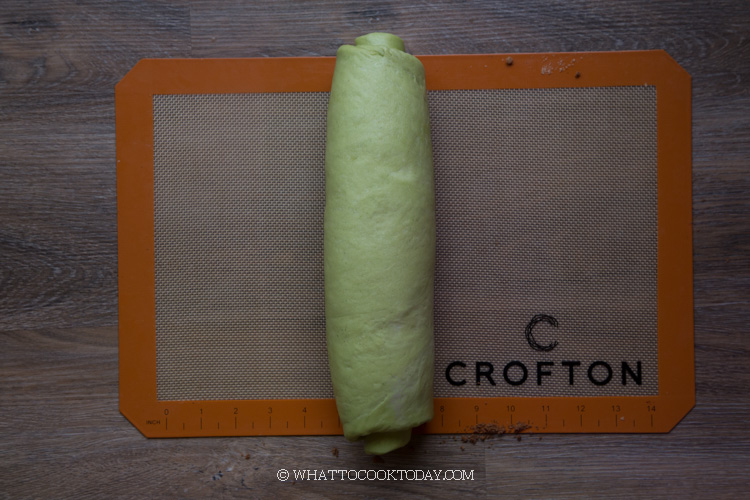 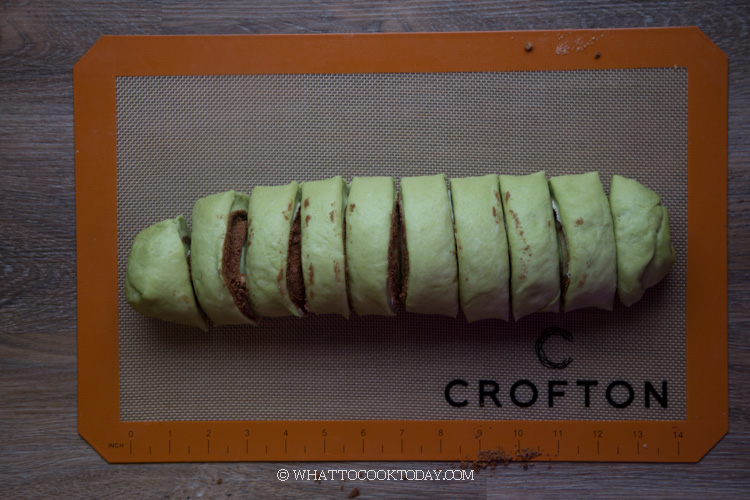 13. Line baking pan with parchment paper
14. Place the rolls on the pan, cover with plastic wrap and let them rise again for another 30 minutes 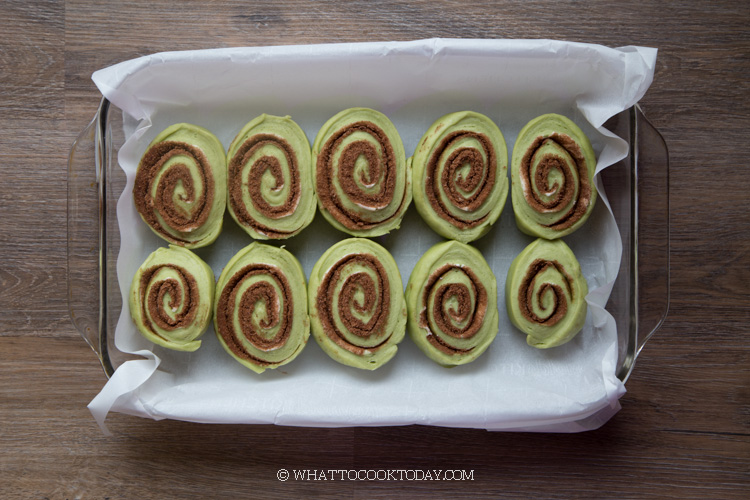 15. Bake at 350 F for 15-20 minutes
Bake just until the edge is lightly brown. This is to make sure we keep the center soft and moist. The important part of the rolls 😉 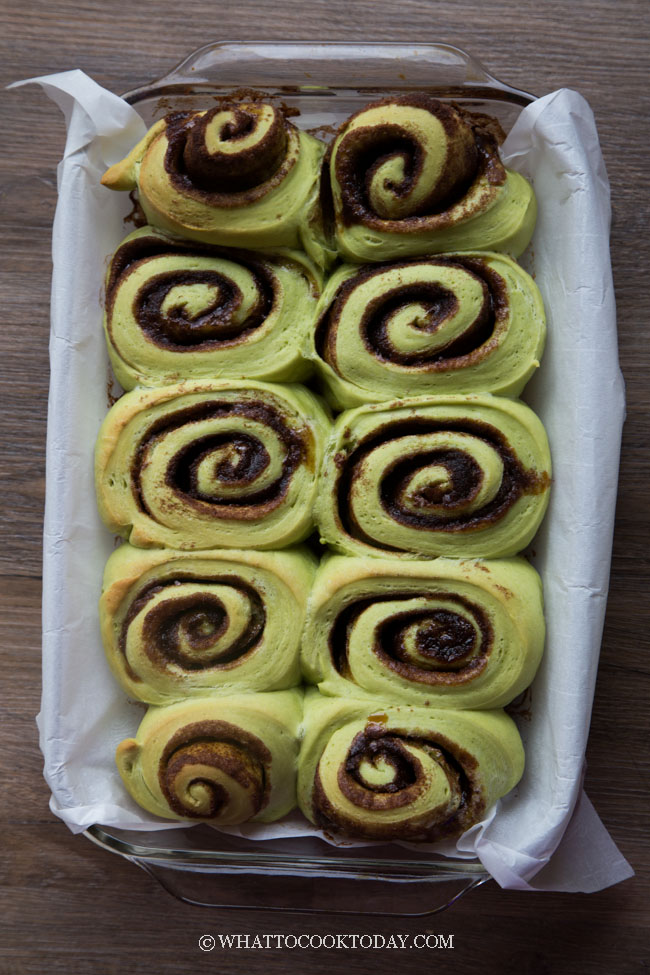 16. Wait 5 minutes and then frost the rolls with icing 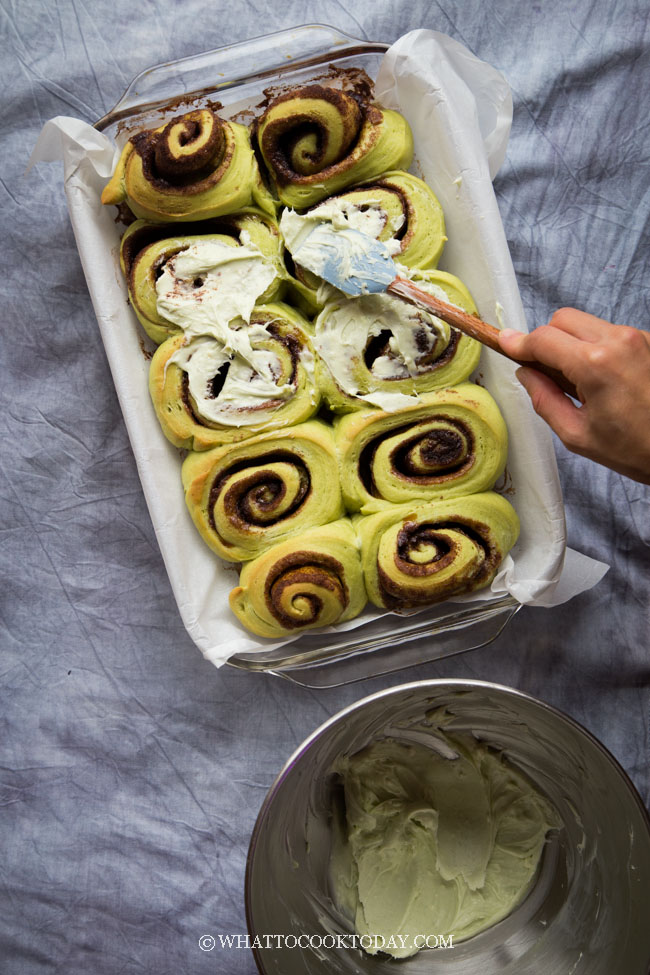 Now, your job is try not to eat too many of these. I’m serious! It’s hard! 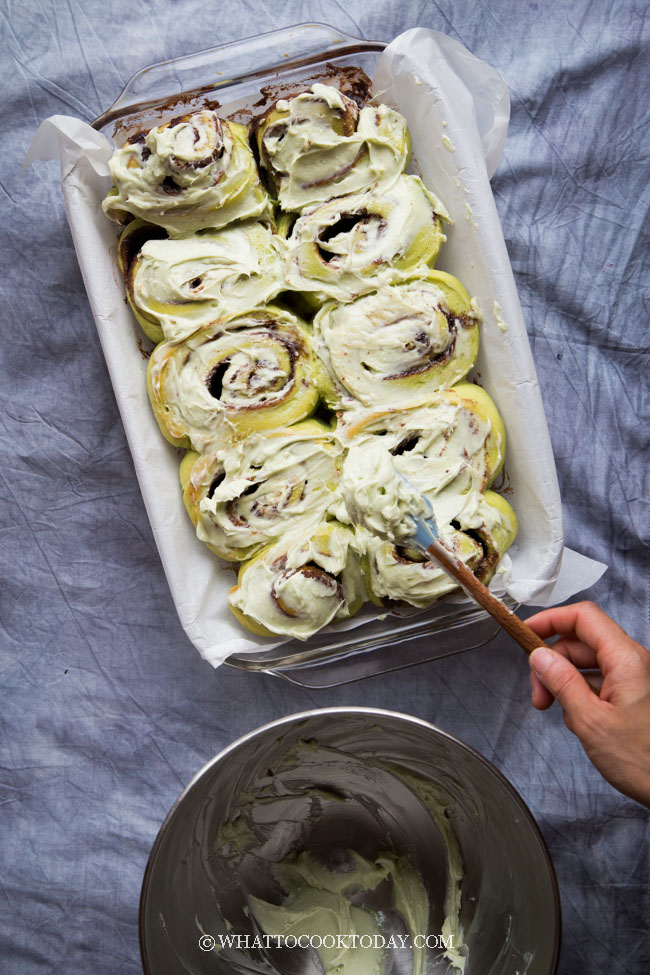 My 4 and 7 years old ate two of these huge pandan cinnamon rolls in a day! Those two hungry beasts! 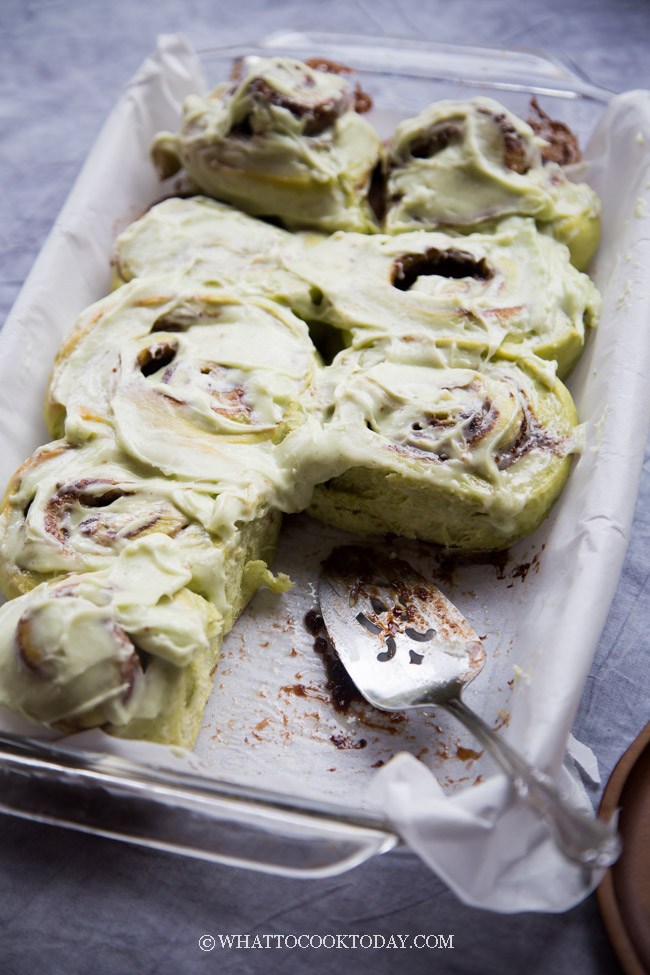 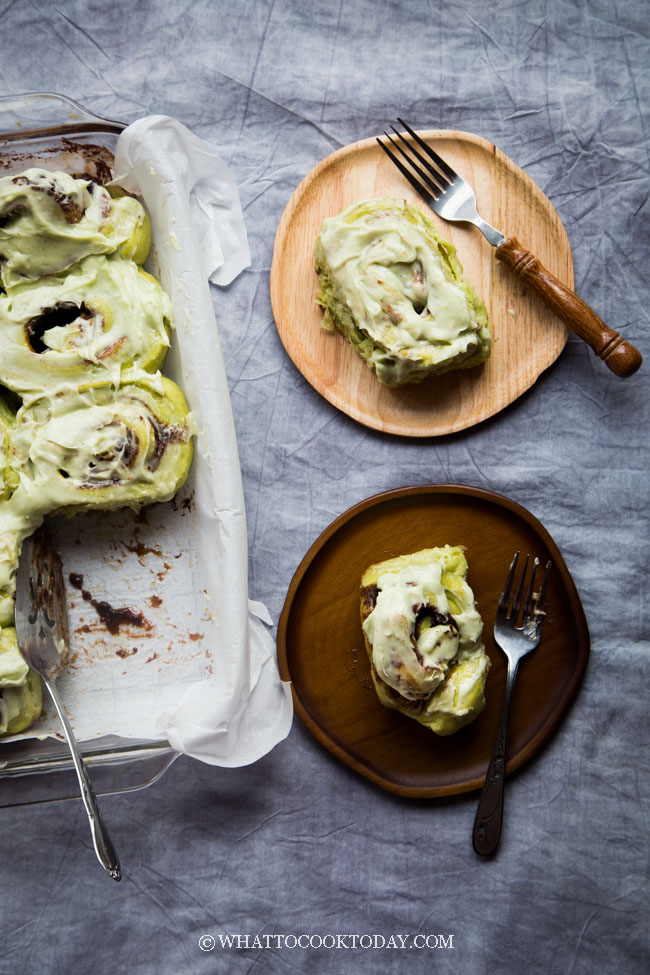 HOW TO STORE LEFTOVER PANDAN CINNAMON ROLLS
They can be kept at room temperature for up to 2 days. Make sure you cover them with plastic wrap to prevent them from drying out. After that, they need to be kept in the refrigerator for up to 1 week. You can freeze them by individually wrapping it up and place in freezer friendly bag.

HOW TO REHEAT PANDAN CINNAMON ROLLS
If frozen, get them out from the fridge to thaw or you can let them thaw in the refrigerator overnight. Cover the roll in aluminum foil and then reheat at 400F for about 15 minutes or until warm. You can also reheat in the microwave for about 45-60 seconds depending on how large the rolls is. 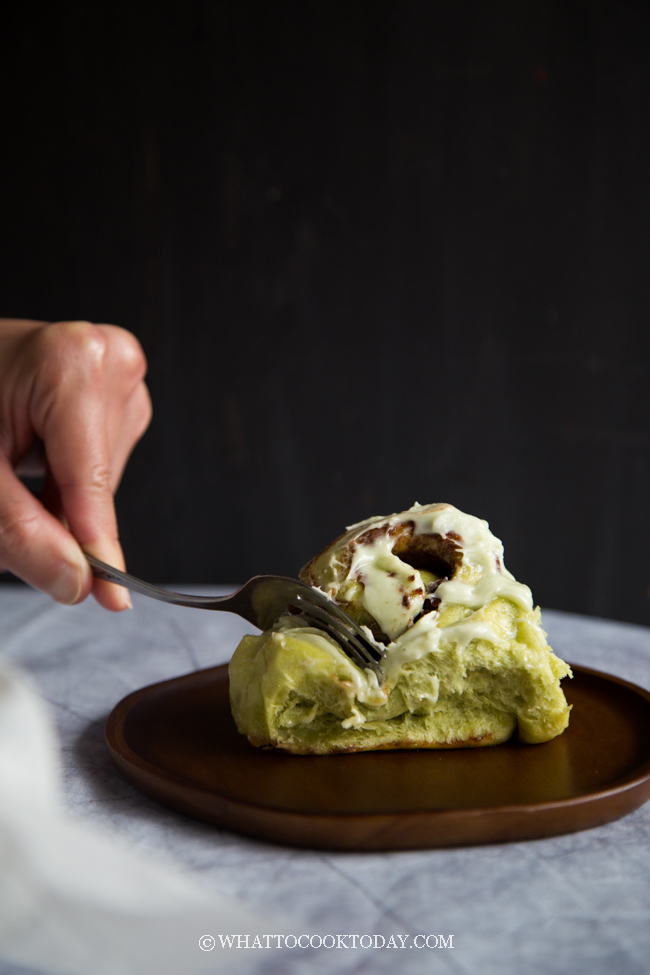 These pandan cinnamon rolls are due for a repeat VERY soon! 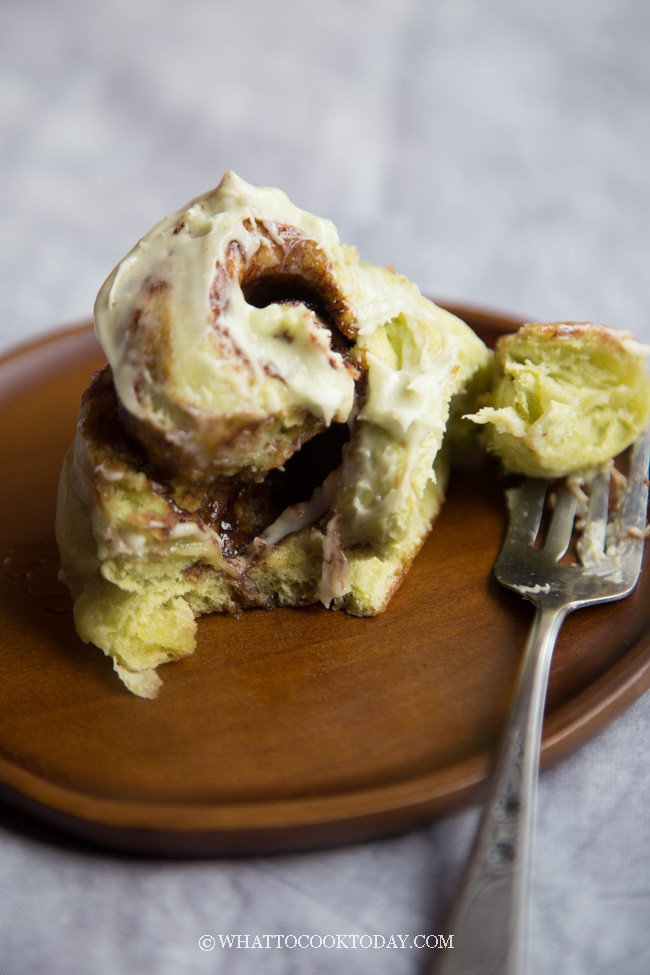 Prepare the filling and frosting:

Hi Audrey, I’ve updated the recipe with metric measurement. I hope that helps!

Cant find pandan leaves but I have pandan extract! Would that still work for this?

Hi Kaye, you can replace the pandan juice with milk (or non-dairy milk/water) and use about 1 tsp of pandan extract.

Made some pandan cinnamon rolls for the first time – they are so awesome ! Gave some to my Neighbor and Parents too. Must simply share the love. That’s how I was brought up!

Hi Irene, I’m so glad you like. This is one of our family’s favorites. Such a treat and you are so kind to share the love too 🙂 Thank you so much for trying and for the feedback! Cheers!

Thank you so much