According to The Soul of A New Cuisine cookbook by Marcus Samuelsson, piri piri or pil pil or pili pili is the Swahili term for hot chili. It is also the name of the national dish of Mozambique, and extremely potent concoction used at tables around the country as a sauce for shellfish, fish, and chicken. In most cases, the authentic piri piri is much too hot for American palates, so Marcus has actually toned down the heat in this recipe. I can tell you though, this is my kind of dish ha! The heat of chilies are in the seeds and ribs, so you can control the spiciness of the sauce by removing those hot spots. I leave mine in as usual. 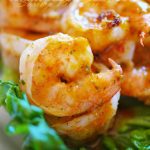