Marrying flavors from different background is my favorite thing to do in cooking. I think it’s a brilliant thing to do !! That’s one of the reasons why I adore Jamie Oliver so much. I think he’s one of the masters when it comes to fusing flavors and ingredients. I’ve tried many of his recipes in the past and they were the best I’ve ever tasted. This spicy surf and turf taco with kimchi isn’t from Jamie Oliver’s. But I truly am inspired by him 🙂

Honestly, this taco was made with just a skirt steak in mind (the “turf”). But after I made the sweet and spicy lemongrass shrimp again, I knew I gotta put these babes on the taco!! they gotta be my “surf” on that taco!! My husband thought this spicy surf and turf tacos were one of the best he had ever eaten. He said there was spicy, sweet, tangy, salty and lightly bitter (from arugula) in taste in that one taco and they were the best combination ever. I love everything about this taco and I’m usually not a taco person. I really am not! But this has changed my mind. I failed making this once though. I forgot to slice the skirt steak against the grain and my poor father in law could hardly even chew the steak (and he has dentures). No, it’s not even funny and I was kicking myself that night. But, the second time I made this, I put a HUGE mental note inside my head to remember to slice it AGAINST the grain and no more drama !! only happy tummies and a husband who thought that his wife was the cook ever !! 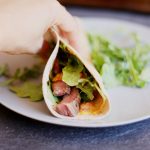 Please pardon me for forgetting to put the “surf” for photograph!! Doh!!!! How To Make Marbled Deviled Tea Eggs (in...