It’s Friday night and both kids have off to bed they go. Here I am alone in front of my computer editing and typing up a recipe. That butterfly in the stomach sensation that I’m feeling though! That often happens! I feel like there are so many things I want to do after the kids are out of sight. The thought of browsing online for some props, or probably watching something trending on youtube, or the possibility of me grabbing one of those spicy sambal crackers that my father-in-law brought from Indonesia while doing one or all of the above! (and the fact that FIL is not around too, no offense, but it’s nice to be away from in-laws after a long day!). Where is the husband you would probably ask! Well, he is busy working his bums off on the East coast this week! And it will be past midnight by the time he reached home after a long week of biz trip! The fact that I was giving the hubby an earful about our front yard situation (I’ll elaborate more next time on that one), which I so selfishly just threw out there when he was on the phone just wanting to “chat” with his wife, surely made me sounded like an ungrateful wife! I had guilt written all over me that night (and so I deserved!) In the 7 1/2 years of marriage, I haven’t seen my husband lost his temper. Seriously..never! Me on the other hand, has lost it a million time over (not my proud moments!). Is it the law of attraction? Is it just his level of maturity? Is it just my good luck? (bad luck for him then!). Whatever it is… I’m telling myself I’m one lucky soul. I would never take him for granted, but I probably should take more yoga classes to help me breathe and calm that temper!

Coriander leaves (different with coriander seeds) or often called cilantro, is one of the herbs that is always in our fridge. It is almost compulsory to have it if you are going to fix some Asian dishes. The stems, which are most often discarded, are actually my favorite parts to use in cooking. It has a more intense flavor and I like to include it in stir-fry or soup.

The “meaty” flavor of pork is tamed by the fresh coriander, resulting in a delicious, satisfying dish. 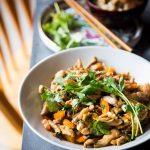 How To Make The Best Jiao Zi (Boiled...

This was an excellent recipe. I added cashew nuts for bulk and crunch but the basic recipe is greaf. Thank you!

Hi Erica,
I love the addition of cashew. What a great idea!!! I’m glad you like 🙂