Stir-fried flat rice noodle or known as char kwe tiau in Hokkian dialect is a highly popular dish across Southeast Asia. With that said there are also myriad of varieties of char kwe tiau out there.

This particular one that I made is called Bagan Char Kwey Tiau from the city of Bagan si api api. Bagan si api api or also called Bagan for short, is one of the cities in the Province of Riau, Indonesia. How they came about the Kwey Tiau, I’m not really clear. All I know is every time I went back to visit my parents, my mom would bring me to this shop that sells Bagan Char Kwey Tiau and it is THE BOMB!!!! If I can’t make it to anywhere else to eat my favorite foods during my visit, I must at least have Bagan Char Kwey Tiau. That’s how good it is!!! It’s one thing you must eat when you are in Medan for sure! It looks red (thanks to the chili) and saucy. The char kwe tiau is not insanely hot, but just enough heat from the chili and being served straight out from the wok….SO GOOD!!

Making this Bagan-style stir-fried flat rice noodle also doesn’t require lots of ingredients. Chili, eggs, oil, beansprouts, garlic, soy sauce and you are good to go! The main key in making good char kwe tiau is to cook them in cast-iron wok and heat up the wok until it is really STONKING HOT! Getting the wok hot enough can impart some of the “smoky” flavor into the noodles, which is what people looking forward to the most in their char kwe tiau dishes or in fact, many stir-fried dishes in Asia.

I’ve made this dish several times and I made it again and perfected the recipe 😉 My tongue said “HAPPY”!! It doesn’t taste exactly the same as the one in Medan. I think it’s impossible to unless I get the recipe straight from the seller lol! But it’s close enough to satisfy my cravings for now. 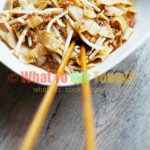