The word Jambalaya means “jumbled” or “mixed up” in French. I just actually learned of this too. Louisiana has some French influence which reflected in the cooking. The idea of Jambalaya is believed to be in the same philosophy with paella, kedgeree, and risotto.

I always enjoyed Louisiana dish because they often include exotic catches like rabbit, squirrel, frog, alligator, etc, in the cooking. The first time I ate an alligator (not the other way around ha.ha. not funny!) was indeed in New Orleans back in 2000. I’m going to give you the same answer you have perhaps always heard…”Taste like chicken” and I swear, it really was. I couldn’t tell!

As for this jambalaya recipe, it is called for chicken, sausage and shrimp. However, if you can get a hold of other type of exotic meats I mentioned above, go right ahead. I always like jambalaya and for making it from scratch, made me even happier. 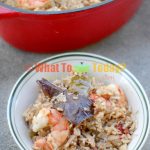 How To Cook Simple Oden and Mala Oden...

CHICKEN AND KALE RISOTTO WITH PINE NUTS AND...