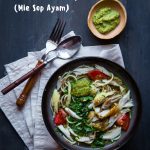 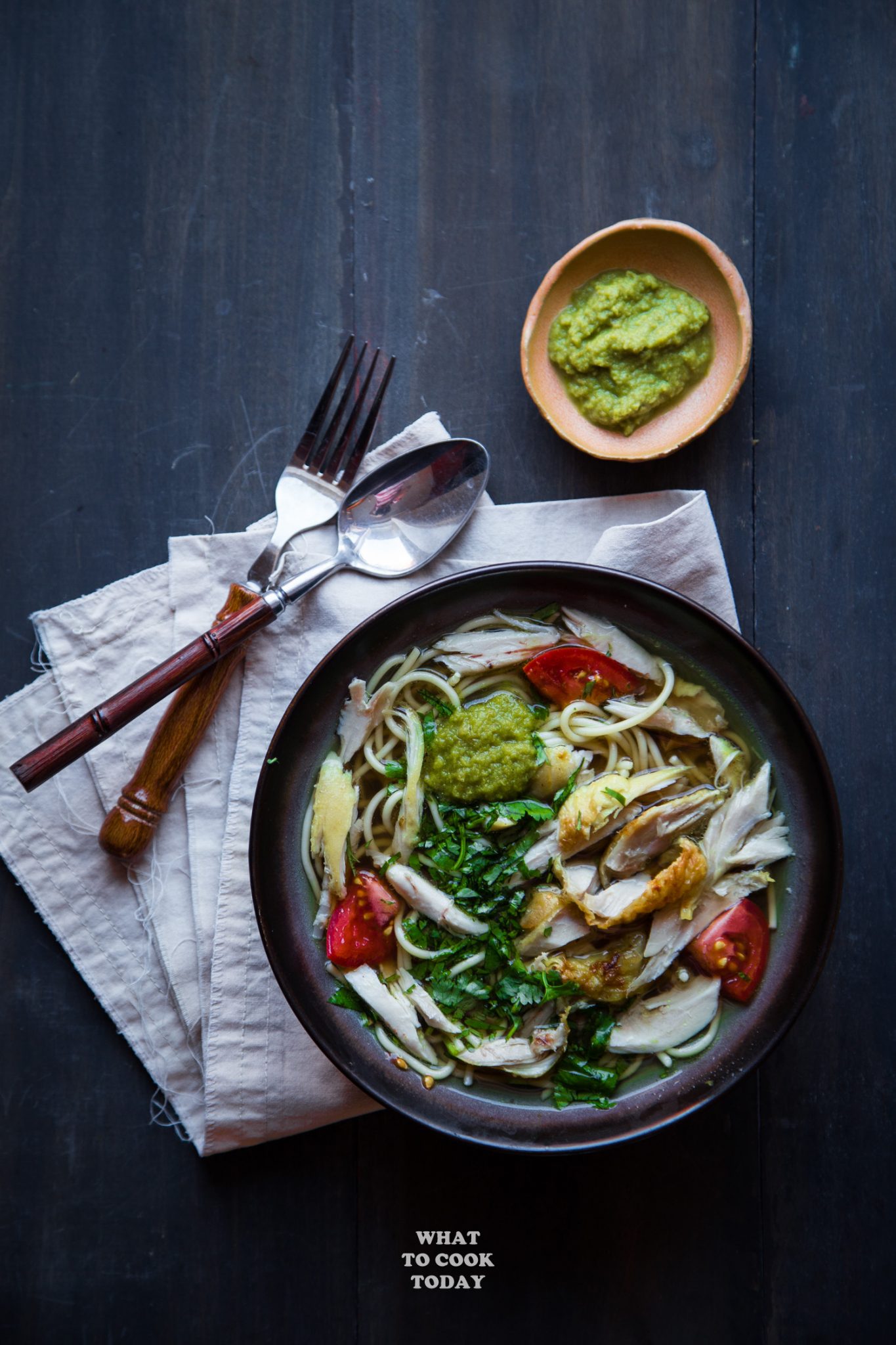 This popular mie sop ayam started out as a push-cart food and has made its way into restaurants’ menu. There is one mie sop stall that has been known to be one of the best mie sop in town at the little city where I grew up in Indonesia. If you are from Medan, you know which one I’m talking about 😉 We’ve eaten there several times too. Business is so good that they are sold out in just a few hours of opening. Crazy isn’t it? They also serve fresh coconut drink in a coconut shell, which I find it very refreshing. 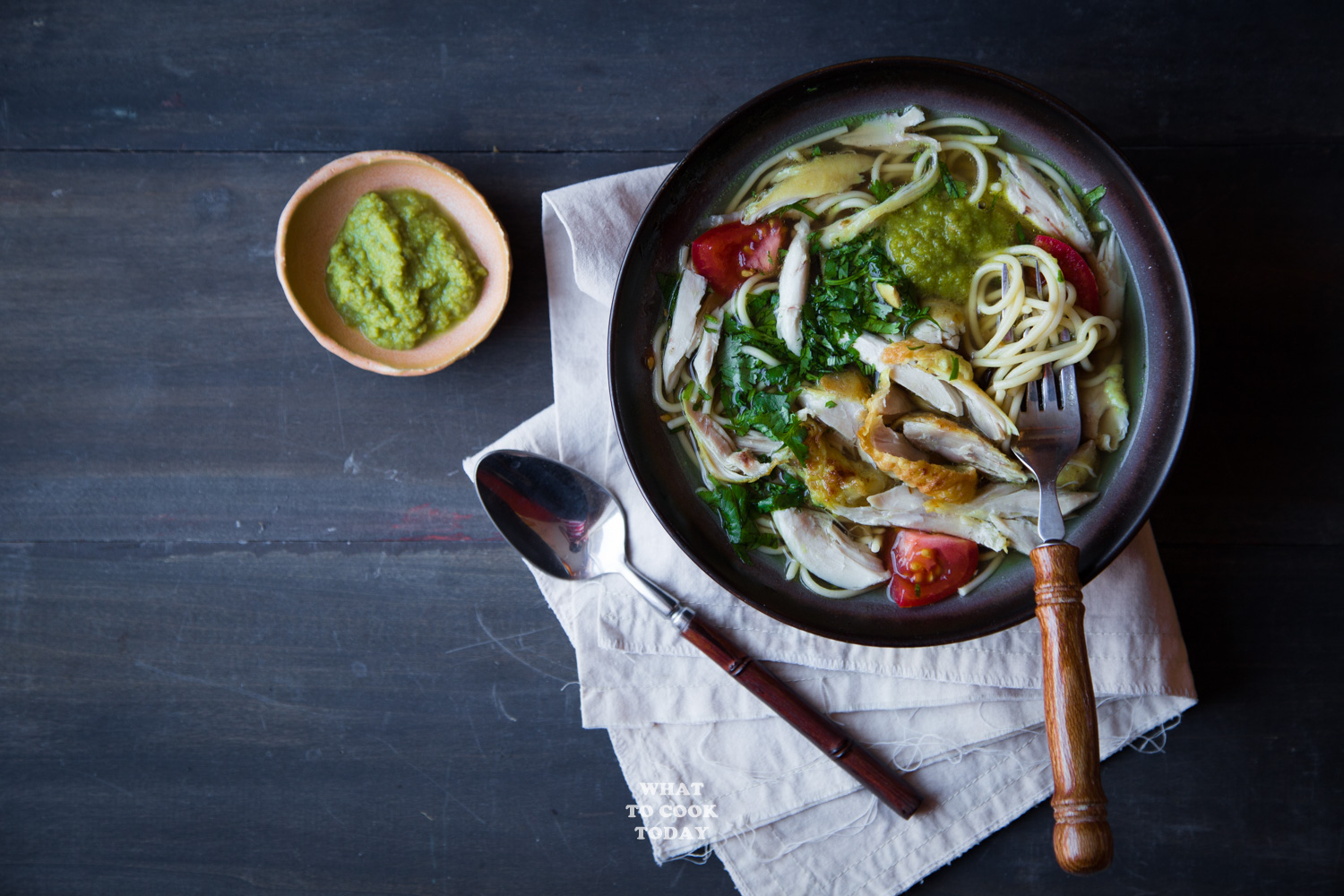 Mie sop is basically a noodle soup served in aromatic soup and topped with shredded chicken meat and other toppings. However, like the mee rebus, the broth is the key of the dish. So, it is important to make the soup taste good. The soup is brewed from the goodness of all kind of spices you can think of. Simple, delicious and can be very addicting too (at least to me and most people who have this before). There is also a beef version. But the majority of the Chinese population in my hometown does not consume beef for religion purpose, including my parents, and so the chicken version is always popular! 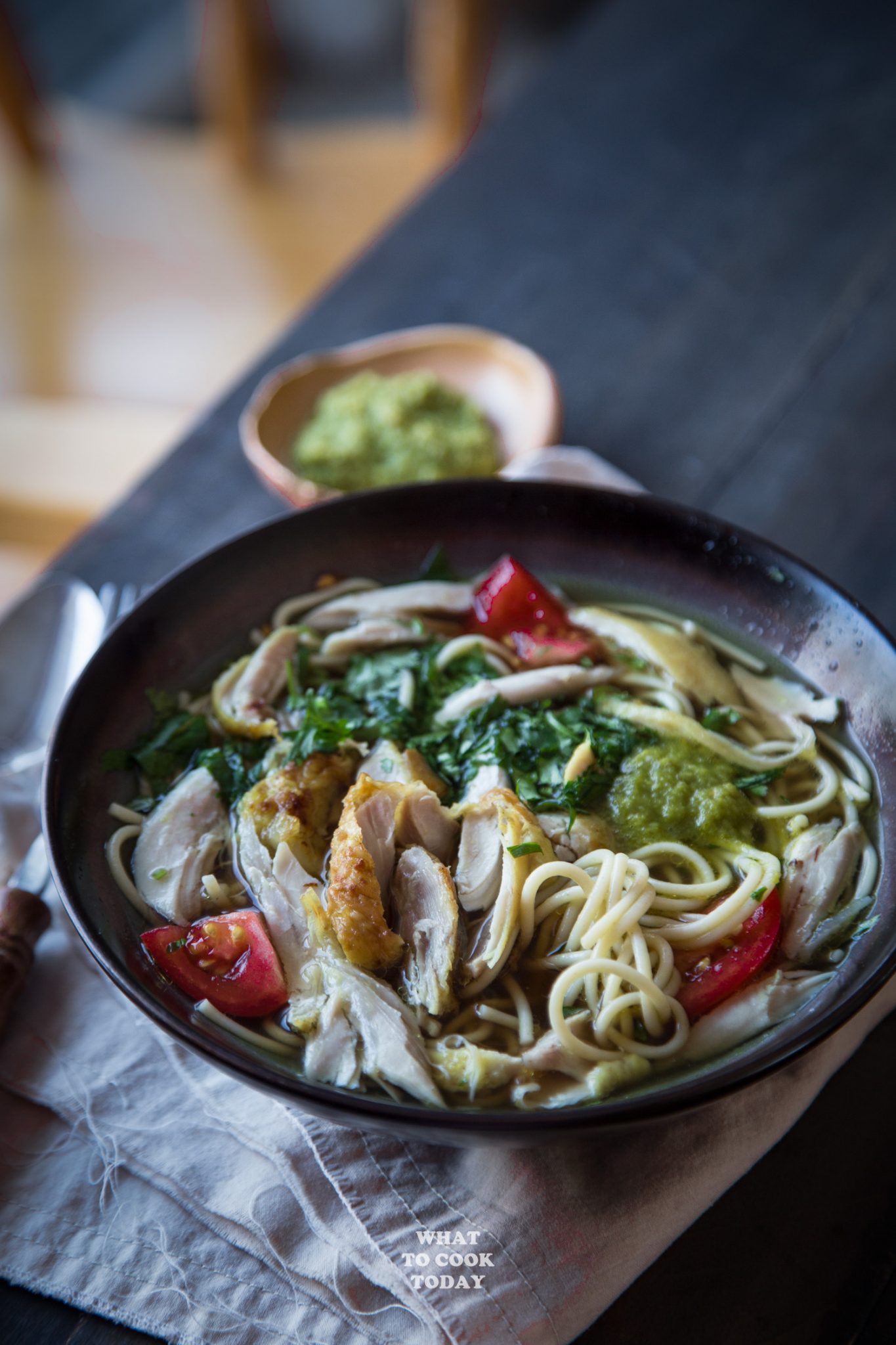 The addition of celery leaves is also what makes mie sop…well, mie sop! I’m referring to the Chinese celery stalks, which is usually skinnier. They have much more intense aroma compare to the American version of celery. You can usually find them in Asian grocery store, but you can always use American celery too if you can’t find any. 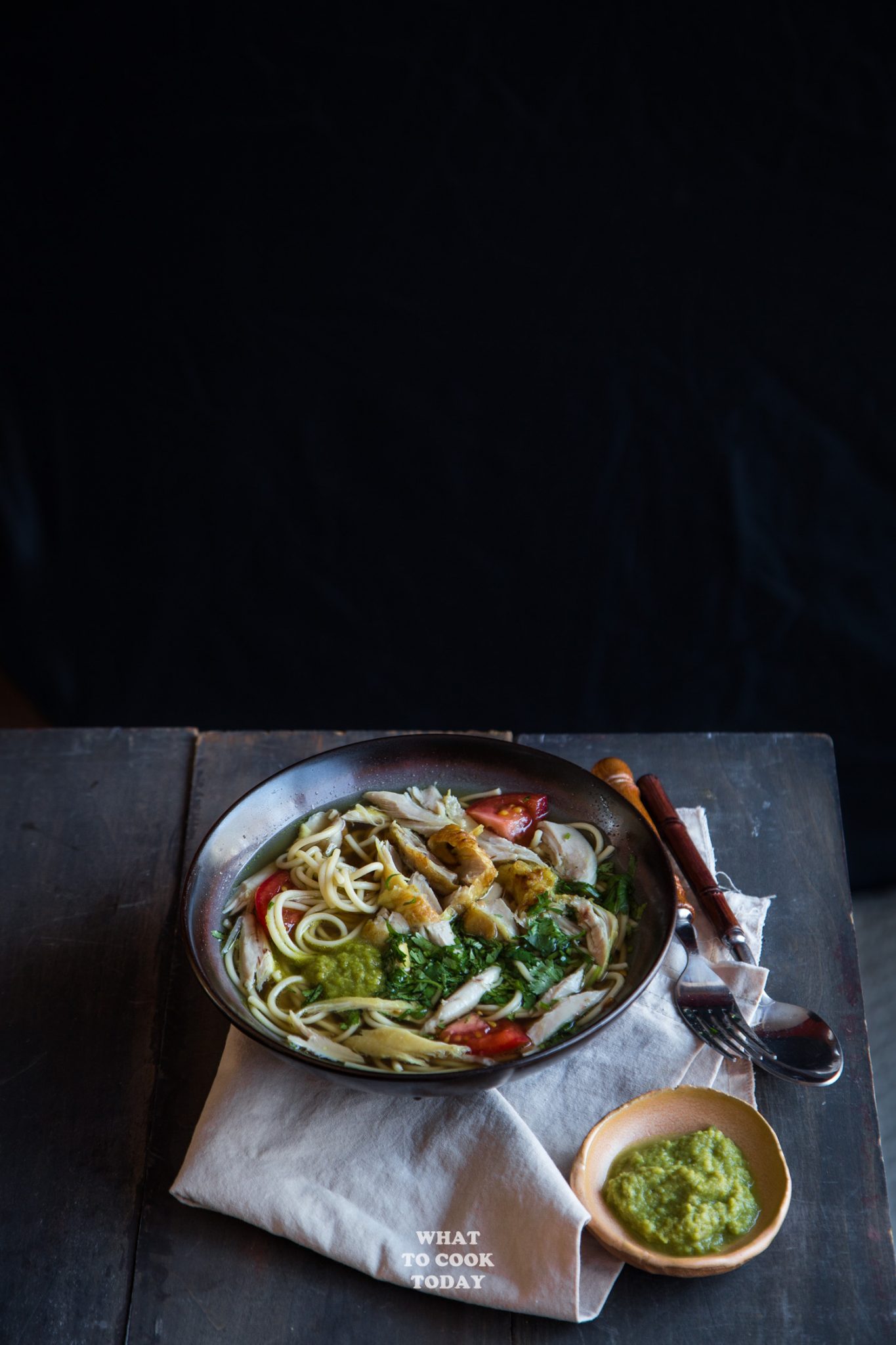 Mie sop is usually also served with colorful tapioca crackers, which I don’t have. The crackers are usually red and white in color. It’s not complete without it, but it’s not going to break the deal either! Just make sure you make that green chili! I don’t eat my mie sop without the green chili 😉 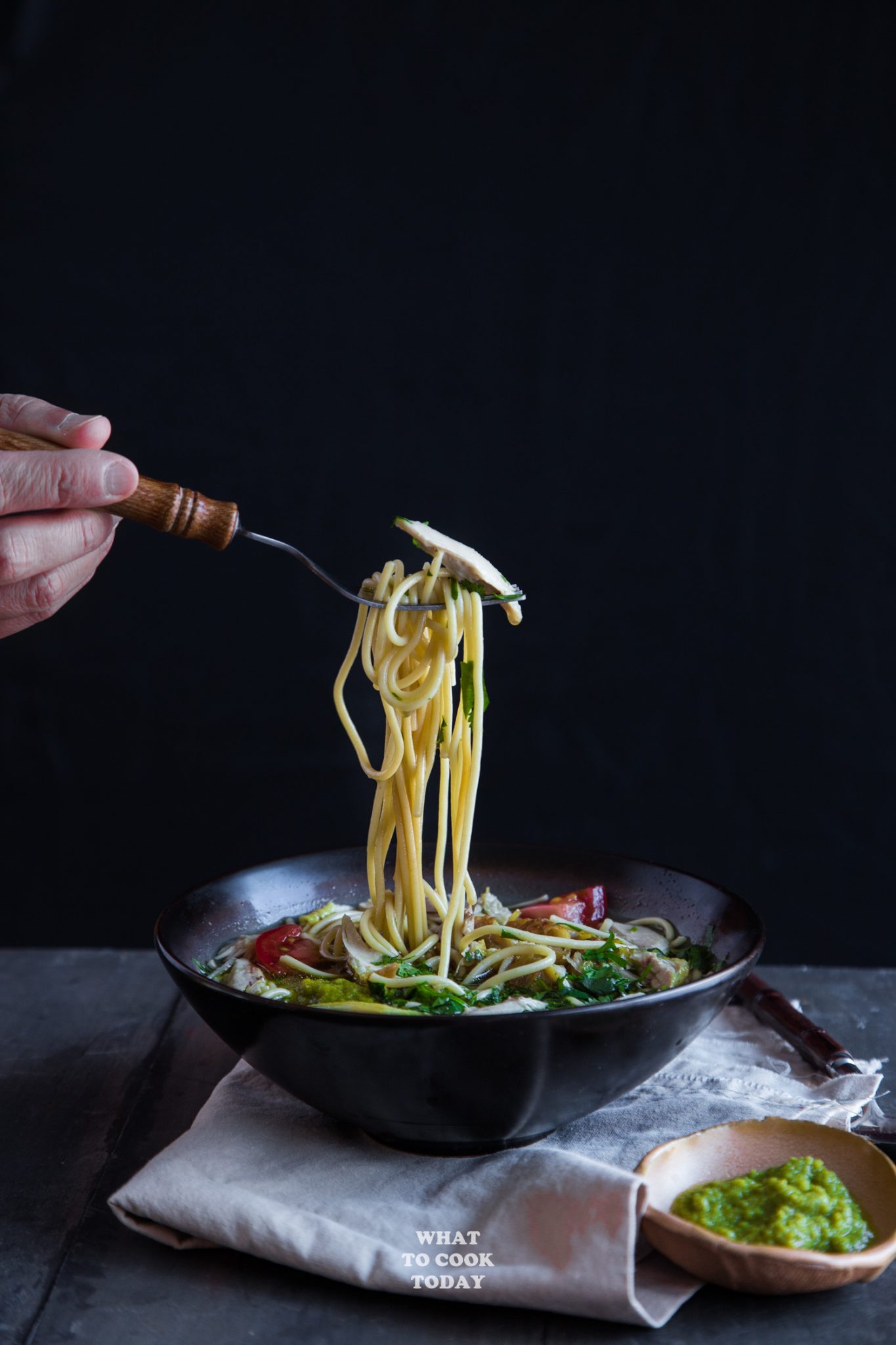 My husband gets excited at the sight of mie sop. It’s his favorite childhood food that he hasn’t had for the long time…until we got married and I learned how to make it:) 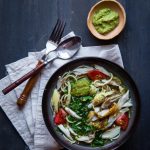 Things to be ground in food processor (add a bit water if you need to):

Cooking noodles and making the chili:

It’s so heart warming to see our favorite childhood food makes its way to the US and the recipe be read by many worldwide, feeling proud. Yes, indeed, it’s the favorite of almost all of us North Sumatran, I’m from Pematang Siantar and don’t differ either. The stall you were talking about, is it the one at Polonia at the road side? I forgot the name of that area… kampung something…? Ato yang di Jalan Metal?

Anyway, just my five cents, the cardamom used should be white cardamom. Most people would be referring to green cardamom as it’s more commonly found in Indian cooking and your spice aisle in the supermarket, however in North Sumatran and Padang style cooking, only white cardamom is used.

The bay leaves that we used too, is called “Indonesian daun salam” (Syzygium polyanthum) which is larger in size than the usual bay leaves (laurus nobilis) which is smaller and used in Western cooking or Indian bay leaves which is more elongated (cinnamomum tamala). Indonesian bay leaves gives pinkish hue and turned very dark green or black when cooked together with the rice in rice cooker (example: nasi lemak) and gives slightly floral smell to the dish, imho.

I also add pinch of nutmeg to enhance the aroma of the soup and palm sugar. My friends of different nationalities love this dish the first time they tried it. Just unforgettable.

Amazing presentation and great recipe, by the way.

I was referring to the one at Jalan Metal 🙂 You are right the cardamom that my mom used usually is the white one, that’s the common one in Indo and my mom swears by Indo daun salam too. The aroma is just not the same compared to Indian bay leaves. SHe usually brought the dried daun salam for me when she visits. Thank you for sharing and I’m glad you guys enjoyed it 🙂

Add beef ball or chicken ball – we are in heaven!!! Thank you for sharing this recipe! 🙂