Porridge or congee is one of my favorite to-go meal when I don’t want to think much of what to feed the family. Most Asians can eat congee for breakfast, lunch, or dinner! One of my kids does not like century egg (pi dan), but one of them LOVEEE it so much! It’s so funny how I can have two kids that has a completely opposite personality when it comes to food 🙂

Century eggs though, is another ingredient besides shrimp paste, that you either like it or you don’t. You can read more about it here. I always order Pork and century egg congee when we go dim sum and I used to be able to enjoy the whole bowl on my own, but now my boy has claimed the whole bowl! I wish I could have a bowl now! 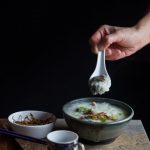 How To Cook Lemang without Bamboo