You can’t say you eat Korean food, if you don’t have Kimchi. And to me, I just have to try and made my own kimchi. Kimchi is a traditional fermented Korean dish made of vegetables with varied seasonings. There are hundreds of varieties of kimchi made with a main vegetable ingredient such as napa cabbage, radish, green onions or cucumber.Kimchi is the most common side dish in Korean cuisine. Kimchi is also a main ingredient for many popular Korean dishes such as kimchi stew, kimchi soup, kimchi pancakes, and kimchi fried rice.

Different types of kimchi were traditionally made at different times of the year, based on when various vegetables were in season and also to take advantage of hot and cold seasons before the era of refrigeration. Although the advent of modern refrigeration- including kimchi refrigerators specifically designed with precise controls to keep different varieties of kimchi at optimal temperatures at various stages of fermentation, has made this seasonality unnecessary, Koreans continue to consume kimchi according to traditional seasonal preferences.

The quick kimchi I made used napa cabbage, which is the most popular type of all. Also known as Baechu Gimchi. This is the kimchi usually made in the fall season. I’ve also made cucumber kimchi, which is considered a summer-season kimchi. The main work for making this kimchi is mainly on cutting and prepping the veggies, and you can have your own homemade kimchi. This recipe makes 1 gallon of kimchi. Which as first I thought “holly cow..that was a lot of kimchi” but you know what? it wasn’t enough to go around after using it to make kimchi fried rice, kimchi pancakes and as side dishes. Seriously, 1 gallon isn’t that much. Believe me! Another recipe keeper from Quick and Easy Korean Cooking by Cecilia Hae-Jin Lee. 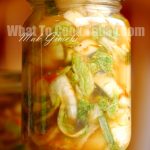 BEEF AND PICKLED VEGETABLE RICE IN A CLAY...