Egg nested fish cakes or we call it pempek or empek empek in Indonesia is a popular street food. Just like it’s called, whole hard-boiled egg is nested inside a fish cake and then fried and drenched in spicy sweet sauce. They can also be made without the egg inside. Either way, I love them.

“Guess how many Indonesian restaurant in New York City” hubby asked. “Err…10? at least?” I said.
“ONE. Only ONE”. he replied. What the fork ?? Are you for real ? So, that was our conversation over the phone again because he was away on a business trip in NYC. Seriously though, I find it a bit hard to believe that there is only one Indonesian restaurant in NYC, considering how multicultural that city is. But at the same time, I probably shouldn’t be shocked with that piece of fact. Despite of being number 4 as one of the most populated country in the world, Indonesia cultures and needless to say cuisines, are not very well known here in the U.S. Kinda sad ! It is so culture rich and so many beautiful islands and most tourists only know Bali. In fact, some people think Bali IS Indonesia. Well, it is, it’s only a tiny part of the whole country.

I grew up in Sumatra Island, but I know there are still some food that I haven’t tried before. I moved to Jakarta, the capital city of Indonesia when I was 18. Lived there for about a year. It’s a very short while. I had always wanted to be an architect since I was 5 years old and so I went to the University there to study Architecture. During my one year in Jakarta, I had tried so many wonderful food and this pempek kapal selam or direct translation into English is submarine egg nested fish cakes is one of my favorites. The place where I stayed sold a really good pempek Palembang. Palembang is one of the cities in Indonesia. This pempek is known to be originated from there. My favorite pempek is the submarine one. It is shaped like a submarine with hard-boiled egg nested inside the fish cake 😉 pempek is usually boiled first and then deep-fried. It will then be sliced into bite size and served with lightly spicy, sweet and tangy sauce drizzle on top of it. I pan-fried mine instead and they still turned out pretty good.

I’ve been thinking about making this pempek kapal selam for a while and finally I got a chance to. It sure brought up sweet memories of that one year I stayed in Jakarta. I felt really homesick too during that time being away from home for the very first time in my life. I’m so grateful that I have so many friends from the same hometown stayed at the same place as I did. They made me feel so much better and less homesick. Every time I eat this pempek kapal selam, I can’t help but to journey back to that memory lane 🙂

This very same recipe can be used to make traditional fish balls too. Just omit the hard-boiled eggs, cucumber, and dipping sauce
Tried this recipe? I would love to see it!Tag @WhatToCookToday and hashtag #WhatToCookToday 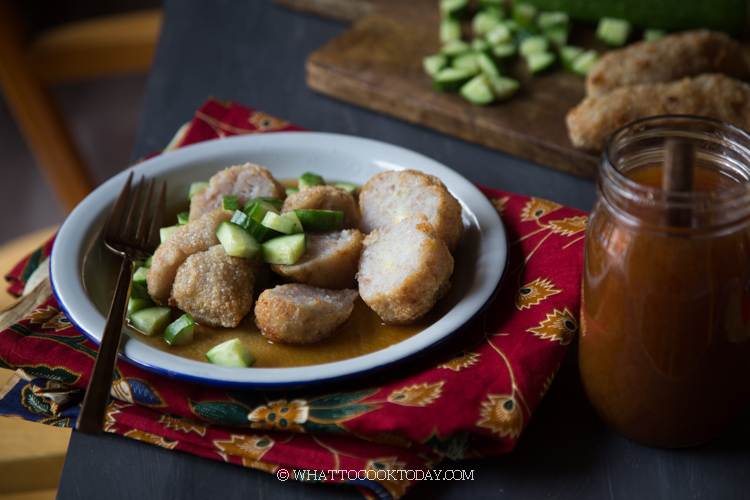 Color your breakfast and eat it too

How To Make The Best Beer-Battered Fish and...

Oh my, these fish cakes with egg inside look so good! I’d love some right now!

Thanks fr the recipe. I love hw the instructions tho. Easily understandable, esp fr guys who rarely cooks.. Like me. Cheers!

Thank you Roz. Hope it’s up to your standard 🙂