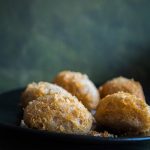 Woo kok is a classic Cantonese dim sum dish which is favorited by many. Mashed Taro is formed into ovals and stuffed with meat and veggies and deep-fried and formed that crusty layer on the outside. No shortening is used in this recipe but still with that amazing crispy crust. 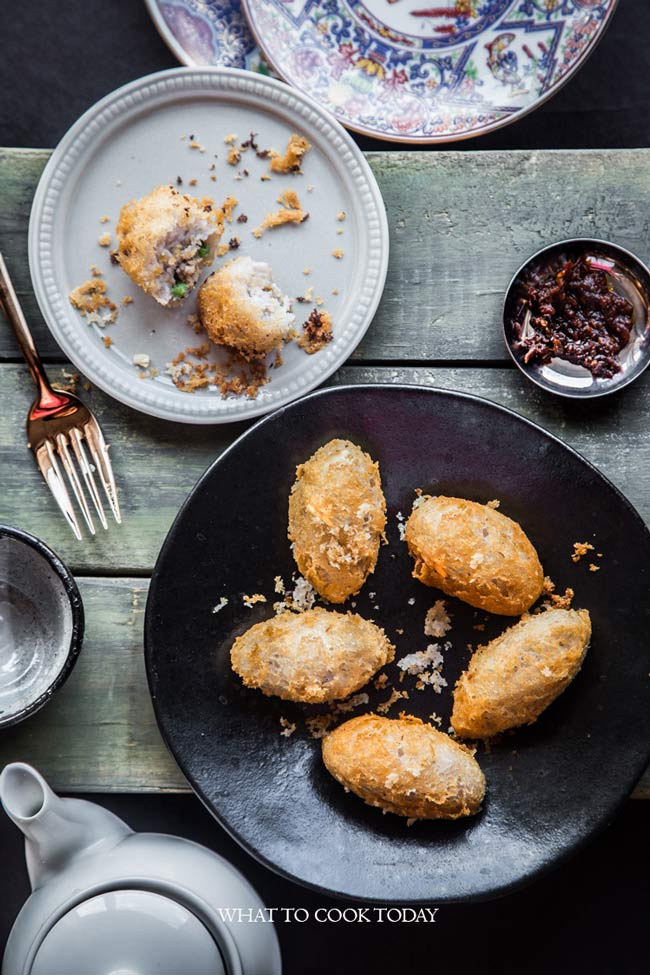 I’m not a person who likes to go to crowded places, not anymore! They say things continue to change as you grow old. I found that’s true. Your taste changes, your style changes, your vision changes. But, going to dim sum is one of my favorite things. Especially when the dim sum places still serving food in push carts. The constant chattering noises from the crowds as they are pouring tea and enjoying their food and pushcarts everywhere with stacks of metal steamer with delicious food inside. I love this atmosphere! 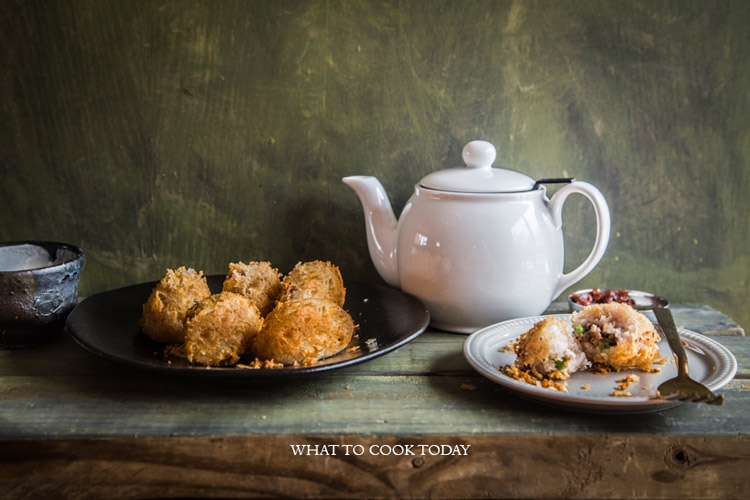 Anyway, I’m sharing with you one of my kids’ favorites (our favorites too!). Taro puff or known as woo kok in Cantonese language, It is one of my very favorite items to order whenever we go for a dim sum. I’ve always had soft spots for taro to begin with (or anything with high carbs lol). Making your own taro puff wasn’t as daunting as I thought it would be. It’s pretty straightforward as a matter of fact. 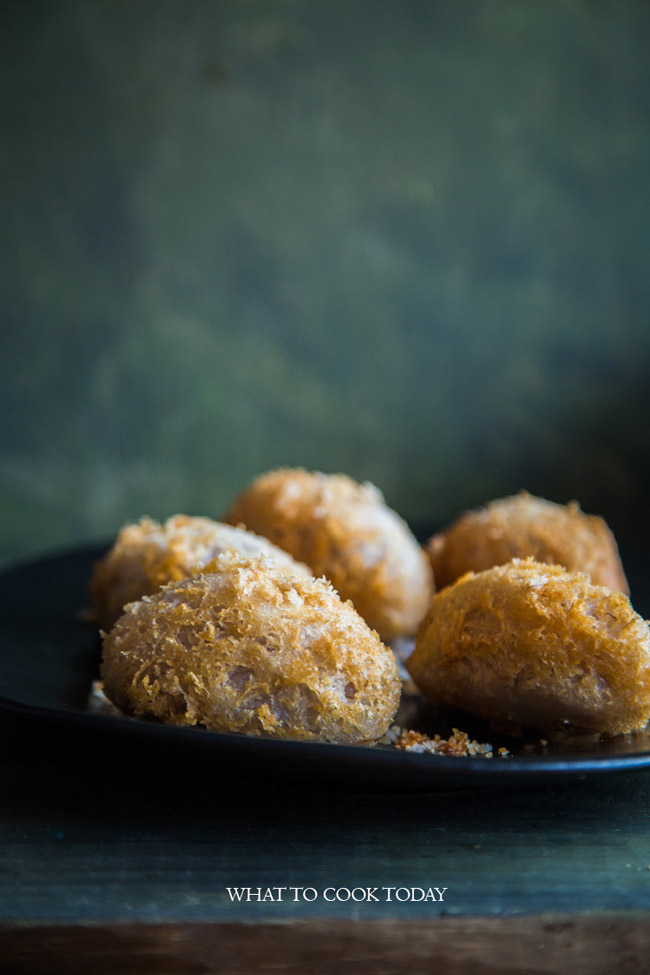 HOW WOO KOK IS MADE
Woo kok is made with taro/Asian yam. Taro has very pale purple color with some dark spots all over. The dough is made of mashed taro and shortening, but I used coconut oil to achieve that crispy layer on the outside. The dough is then stuffed with filling made with minced pork (or substitute with your choice of meat), mushrooms, and some people put green peas. 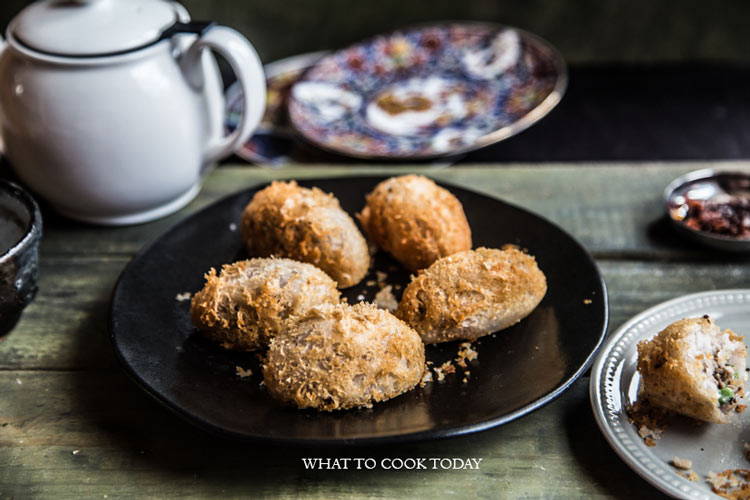 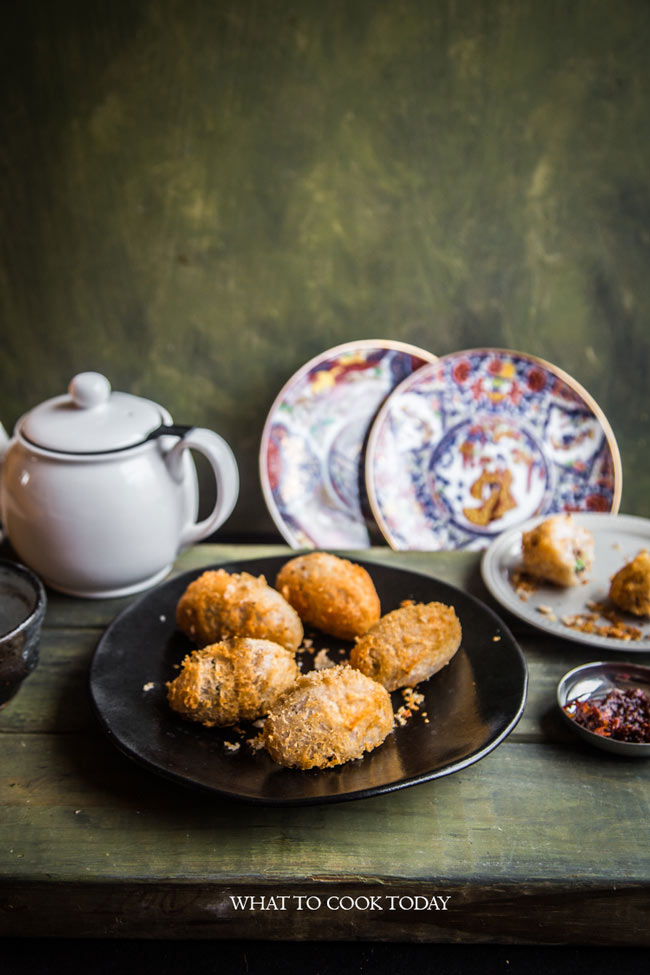 TIPS FOR HOW TO MAKE WOO KOK SUCCESSFULLY AT HOME
1. Cook the filling the day before
I like to do this so I don’t get overwhelmed trying to do everything on the same day
2. Use the right kind of wheat starch
The recipe calls for wheat starch, which is different than what we called all-purpose flour here in the U.S. Wheat starch has most of its gluten remove and mainly starch left, where wheat flour still has gluten that gives you that stretchy pull. Wheat starch can only be found in Asian grocery store (as far as I know!). Do not replace with all-purpose flour, or tapioca starch, or corn starch, it’s not the same thing.
3. Make sure the filling is cool enough before wrapping.
This will actually make your life easier when you wrap. If the filling is still warm, it will make the dough sticky 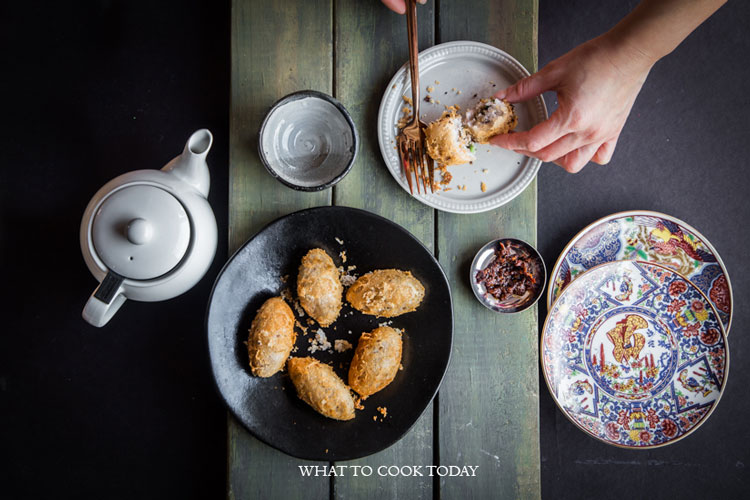 WOO KOK CAN BE MADE AHEAD AND FREEZE
Here’s how to freeze uncooked woo kok:
Once you have filled and shaped the dough into oval, place them on a baking sheet lined with parchment paper. Pop in the freezer and let them chill until they are solid, about 1 hour or so. After that, transfer them to freezer bag and they will not stick to each other anymore
Here’s how to cook them after freezing:
Do not thaw them. Preheat oil for deep-frying. Once the oil is hot enough, lower the heat to medium and then fry the frozen woo kok in small batches, I suggest one at a time to start with until you get the hang of it. We don’t want the outside to get dark too quickly and the inside is still cold or worst, frozen. 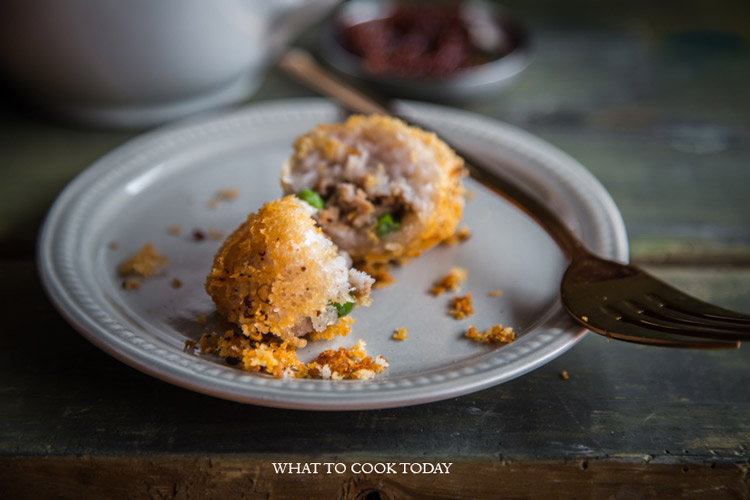 I’m happy with the result and even happier when I bite into the crispy outside and the soft and savory filling. It is to die for !!! I used coconut oil instead of shortening. The result is still amazing but without the shortening! 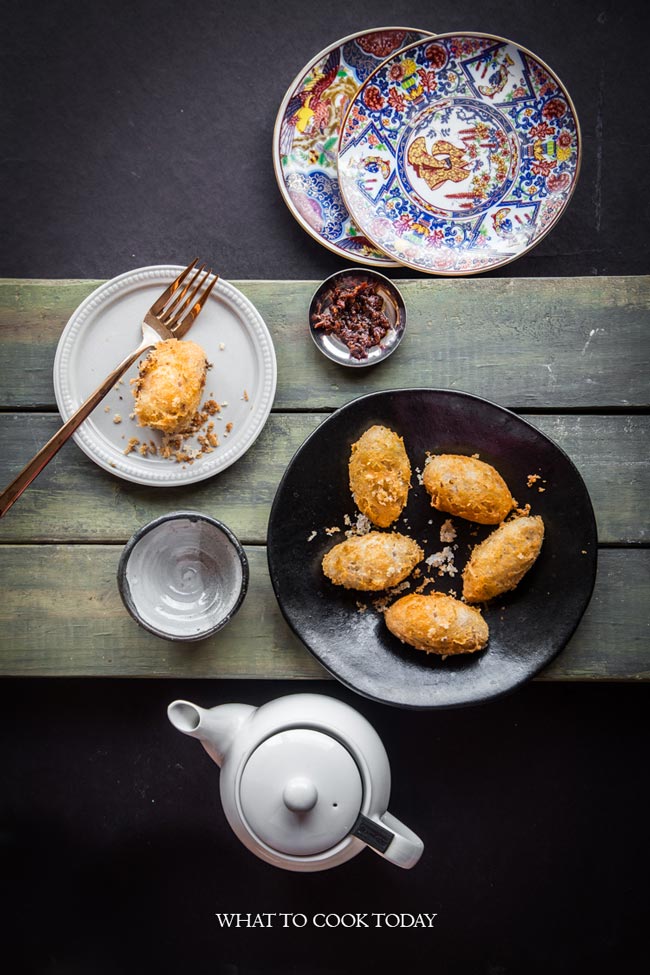 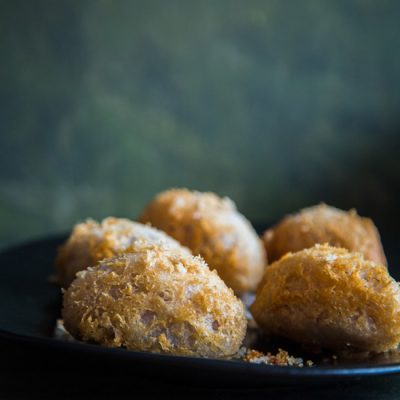 Prepare the filling a day before if possible:

If you ever wonder if the puffs taste like coconut, no they do not. The coconut oil does not overpower the puff at all and yet it still gives you that flaky crispy crust like when you use shortening I reheat them by placing it in the air fryer at 400 F for 5 to 10 minutes and they are as crispy as ever!
Tried this recipe? I would love to see it!Tag @WhatToCookToday and hashtag #WhatToCookToday

Hi Marv, thank you for your recipe and detailed advices.. I have been trying and trying for months, and hopefully have understood the secret: oil temperature : 190 celsius/375 Farenheit
I am lucky enough to live in Tahiti where there are all types of taro, and a large chinese community, so wheat starch and all other ingredients are easy to find

All the best, stay safe
Monette

Hi Monette, glad to know that you have no problem finding all the ingredients. Let me know how they turn out for you 🙂 You stay safe and healthy too !

Thank you for this nice recipe
It is written mash the taro with the lard
Does this stand for the coconut oil?

It should be coconut oil 🙂 Original recipe calls for lard but I use coconut oil. Thank you for pointing this out. I’ll get it corrected 🙂

Hi, Marv. It does seem daunting, but I’m gained to try this. Some questions please: 1) Is the taro weight before it’s steamed and mashed?; 2) do you know how many cups of mashed taro this equates to? 3) does the water have to be boiling? (some recipes call for boiling water to “cook” the wheat starch; 4) is the coconut oil amount in solid form approximately 1 cup?; 5) Can butter be used as well? and lastly, 6) any idea if this can be air-fried? Thanks for allowing me to pepper you with all these questions.

Hello, it’s good to ask questions. That means my instructions aren’t clear enough and I can always improve on that part too. I have updated the recipe accordingly to make more sense 🙂
1) Is the taro weight before it’s steamed and mashed?;
The taro weight is before it is steamed and mashed. So after you peel you will get about 700 grams of taro
2) do you know how many cups of mashed taro this equates to?
I didn’t have the ingredients measured in cups when I made this, but based on the online conversion it says 100 grams would roughly equal to 1/2 cup
3) does the water have to be boiling? (some recipes call for boiling water to “cook” the wheat starch;
Yes, the water needs to be boiling hot
4) is the coconut oil amount in solid form approximately 1 cup?;
based on the online conversion yes, it’s close to 1 cup
5) Can butter be used as well? and lastly,
Yes,I’ve seen recipes used butter too. The texture may comes out slightly different. Your end product may come out softer (may be slightly easier to crumble)
6) any idea if this can be air-fried?
This part I don’t know for sure 🙂 I didn’t own an air fryer back then but I do now. Maybe i should try it out in the future. If you do try it with an air fryer, let me know how it turns out 🙂

Hi Marv! I miss your posts and just saw that you decided to quit IG. Hope things are going well!

I sure miss you and your beautiful IG posts too. Things are going well here and I hope the same for you too dear.

These look so lovely. My mom used to make a spicy and crispy taro root and I used to be a happy girl every time that was on my plate. But, taro made into a dim sum is definitely intriguing and looks incredible:)