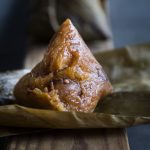 Learn how to make Hokkien bak chang in a pressure cooker or with boiling method. The recipe is a no fuss but with same great taste. Also find the step-by-step on how to wrap bak chang. 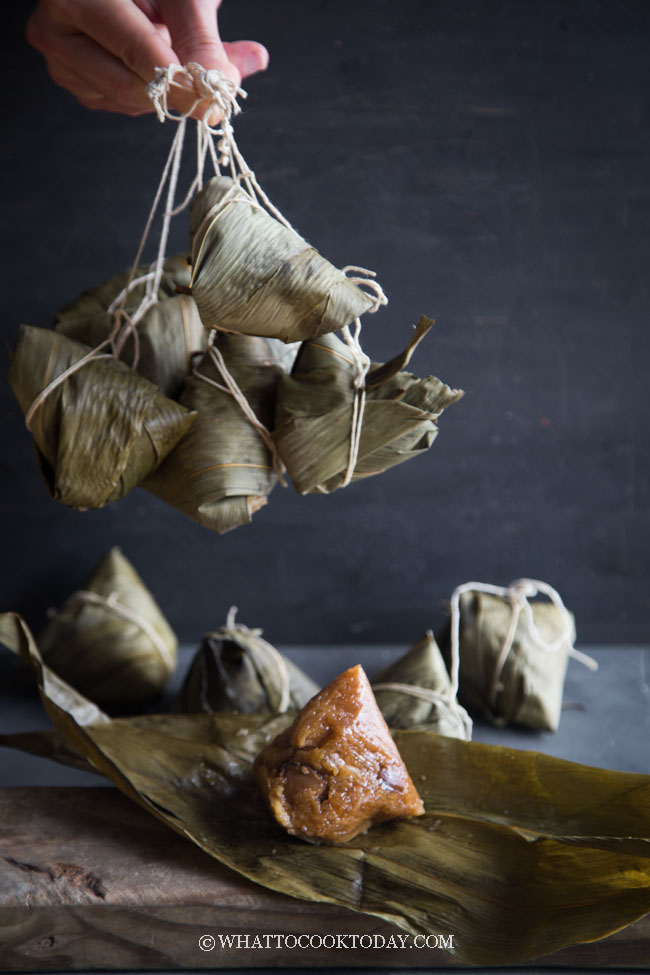 I’ve never imagined making zongzi or bak cang in Hokkien dialect, on my own. I mean this was something I took for granted. Either my mom would make them or my aunt would make some or my dad would buy some. Regardless, we always had some to eat. They are also available at most Asian grocery stores too, however, I always miss the one I had at home. Zongzi is traditionally eaten at the Dragon Boat Festival on the fifth day of the fifth lunar month (confused yet ? don’t worry about the day and the month, just focus on the food).

WHAT IS DRAGON BOAT FESTIVAL?

The Dragon Boat Festival is the commemoration of the death of the great poet and official of the state of Chu, Qu Yuan, during the Zhou dynasty. He wrote a great deal of poetry during his life and serve in high offices. He was accused of treason during the warring states period. He felt despair and Qu Yuan drowned himself in the Miluo river in northern Hunan. People who admired Qu Yuan made rice parcels and threw them into the river in the hope that the fish would not consume Qu Yuan’s body and ate the rice parcels instead. 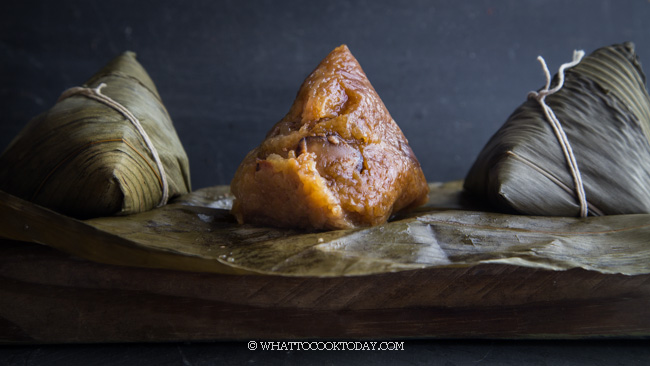 The version I’ve heard, told by my late grandma, was that zongzi is made and used as one of the offerings for deceased people. Zongzi made with glutinous rice is sticky in nature, so it will be sticky when eaten using hands. Some Chinese believe that the deceased person isn’t aware that he has passed away and hence, when he eats the glutinous rice cones on the 7th day of his passing, his hands are sticky and when he washes hands, he will see his fingernails that have turned black (rotten). He will then know that he has deceased. So, the zongzi is used to help them realize that they have passed away and rest in peace. Interesting story! 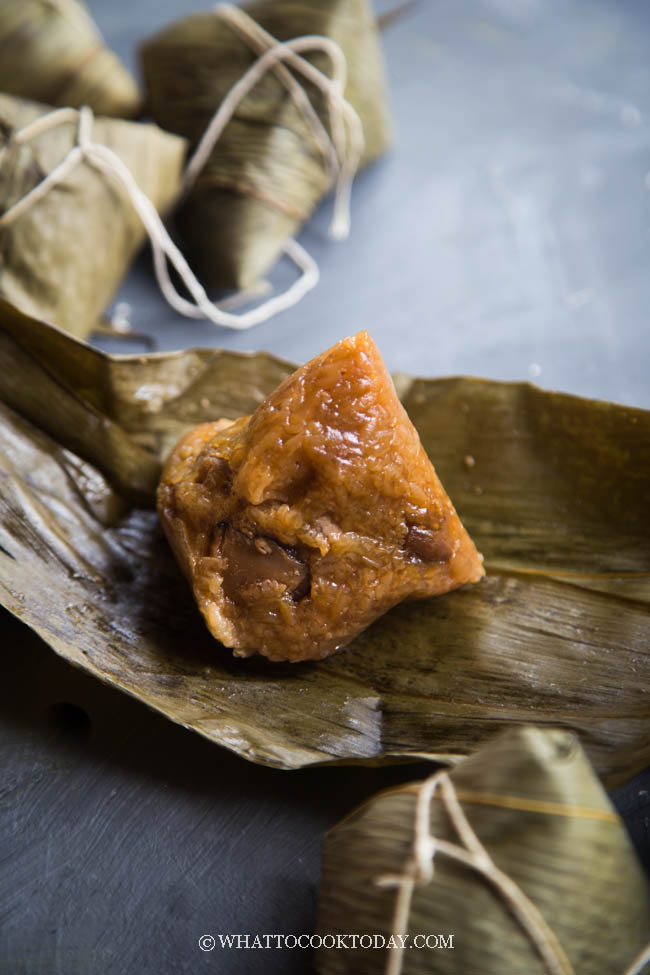 Despite all the stories out there, no one really knows for sure. I just know that Zongzi is eaten all over the world, especially in Asia. Of course, as the Chinese immigrated to other countries, this culture is carried along and now is eaten in other parts of Asia and has been adapted to local taste too.

SAVORY VERSIONS: There are Cantonese bak chang, Hokkien bak chang, Teochew bak chang, Hainanese bak chang, and Nyonya Chang as far as I know. All are made with glutinous rice and wrapped in bamboo leaves but with different variations in filling.
SWEET VERSIONS: alkaline dumpling (kee chang), sago dumpling

My Dad’s family is Hokkien and needless to say, Hokkien bak chang is what I grew up eating. Even though my mom’s family is Teochew, but I’ve never tasted Teochew bak chang before. Teochew bak chang has both sweet and savory filling.
Hokkien bak chang is much darker in color because dark soy sauce is used and I know some has black-eyed peas added to the filling. I didn’t use that. The meat filling is also cooked in five-spice powder and chestnuts and salted egg yolk are added. The glutinous rice grain is usually stir-fried in five-spice powder and dark soy sauce for that dark appearance. 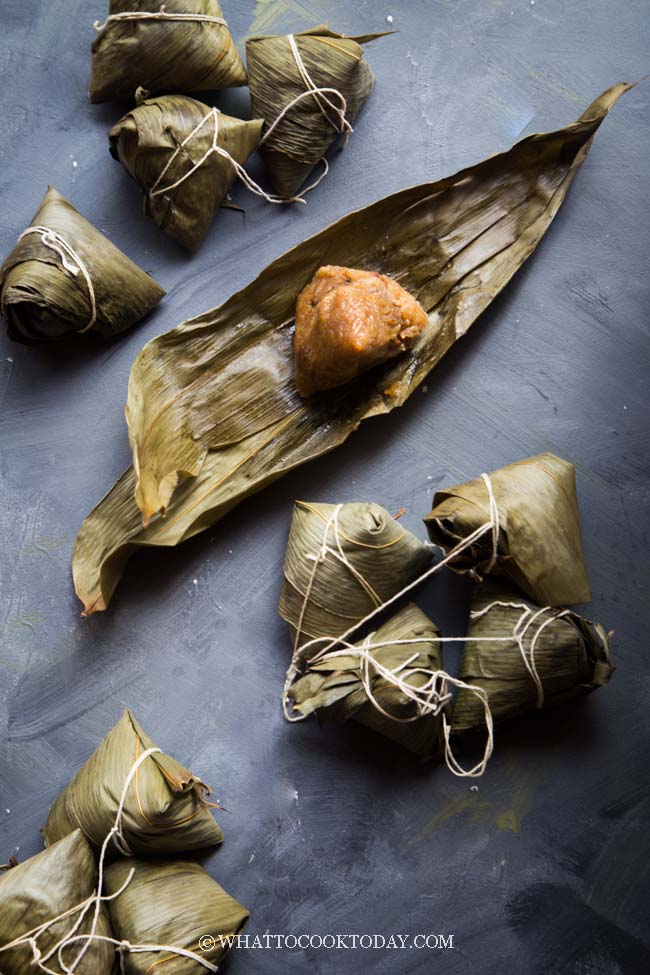 After the success with making Easy no-wrap bak change, I mustered up some guts to try out the traditional wrap bak chang. The Nyonya chang I made with pressure cooker turned out really great too. I simplified the recipe to make it less intimidating but I can assure you it still has the same great taste
1. NO SOAKING OF STICKY RICE
This is probably one of the best parts for me. The glutinous rice can be cooked in the pressure cooker without having to be soaked for hours or overnight. If you plan to boil them, you still need to soak the rice for at least 4 hours

2. REDUCTION IN COOKING TIME
By using a pressure cooker, you save time significantly from regular 2- 2 1/2 hours of boiling down to 50 minutes!

HOW TO MAKE AND PREPARE BAK CHANG

1. STIR FRY THE RICE
After soaking the rice (if you are not using a pressure cooker to cook the bak chang), drain all water. Preheat a large wok or skillet. Add cooking oil. Stir fry garlic until really fragrant. Add the rice followed by all the seasonings. 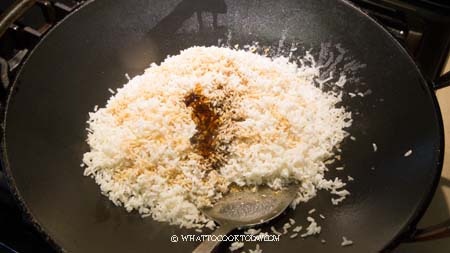 Stir fry the rice until it picks up all the seasonings and the rice turns slightly sticky. Remove from the heat and let it cool down before using it to wrap 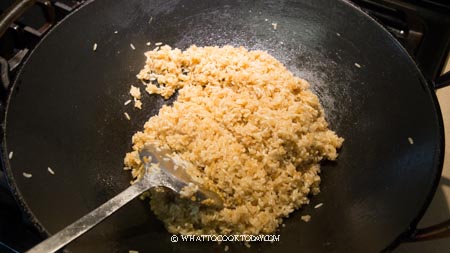 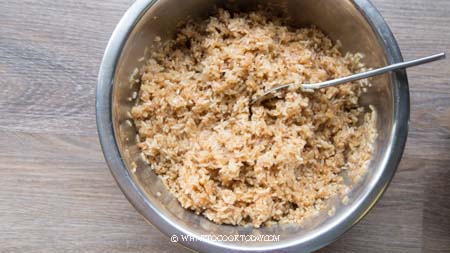 2. COOK THE MEAT FILLING
Preheat a pot or Dutch oven. Add cooking oil and stir fry the garlic until fragrant. Add dried shrimp and stir fry for another minute. 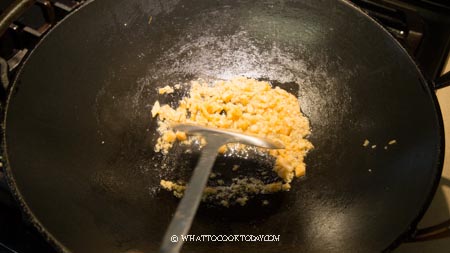 Add the meat and stir fry until the meat turns color. 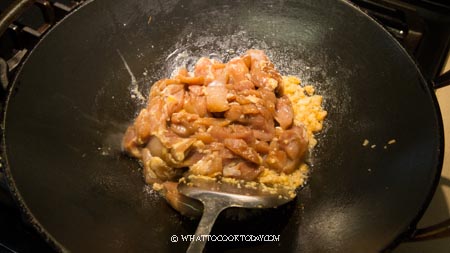 Add water chestnuts and mushrooms. Continue to stir fry until the meat is cooked through 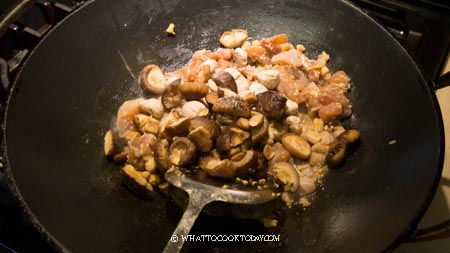 Stir to mix everything. 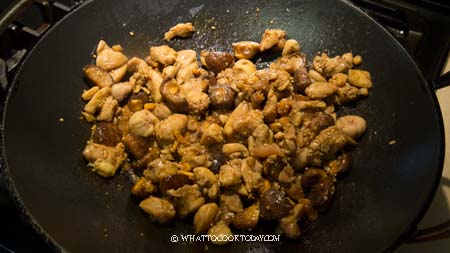 Add Chinese sausage and stir fry for another minute. Have a taste and add more soy sauce or salt to taste. It should be savory in taste. 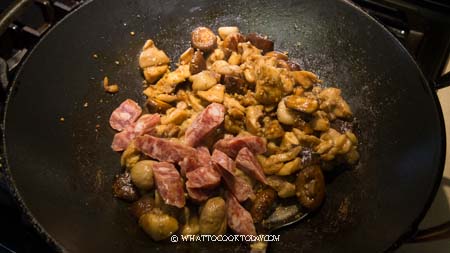 Stir in the crispy shallots (bawang goreng) if using. Dish out and set aside 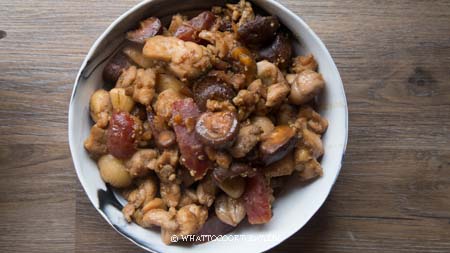 1. Stack 2 leaves on top of each other. If you have ragged leaves, you can use another leaf to cover by overlapping them so there won’t be any leakage. Make sure the smooth side of the leaves are facing you 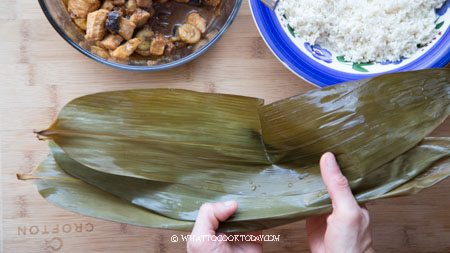 2. Fold into a cone shape 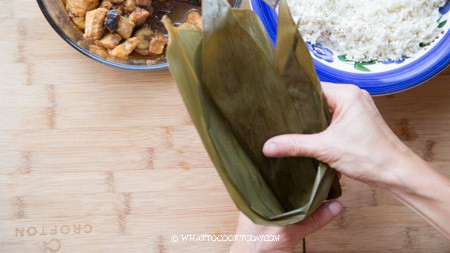 3. Fill it up with about 1 Tbsp of rice and use the back of the spoon to pack it in and slightly create an indentation in the middle for the filling 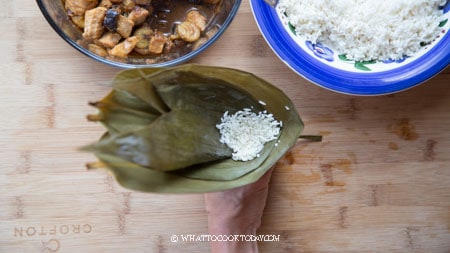 4. Then add chestnuts, mushrooms, Chinese sausage, and few pieces of the meat 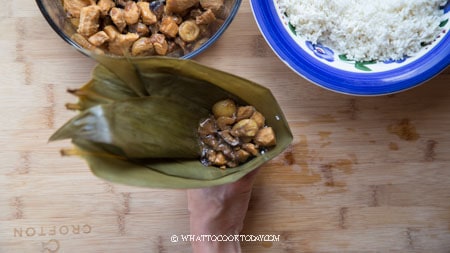 5. Top again with a scoop of rice and press with the back of the spoon to make sure they are tight. 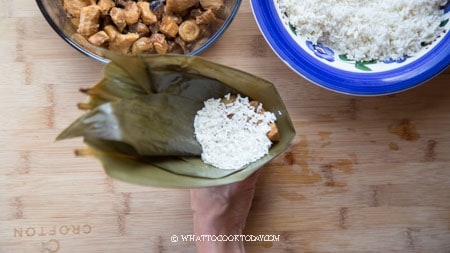 6. Fold one side down 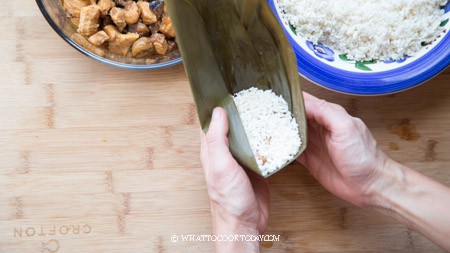 7. Fold the opposite site down 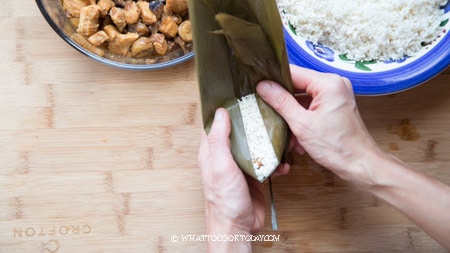 8. Fold the top over 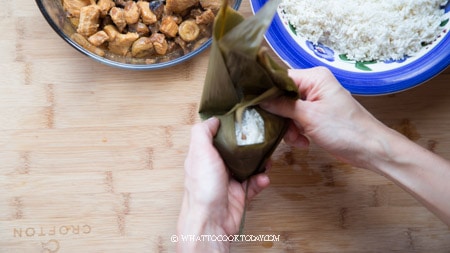 9. This is how it looks like at this point 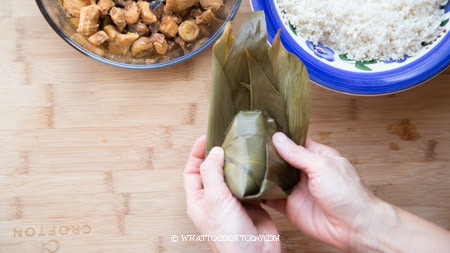 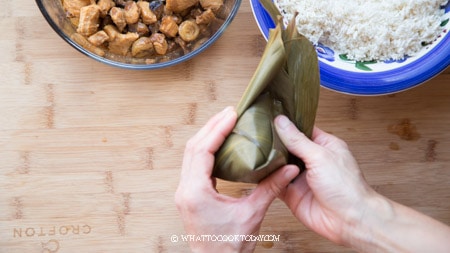 11. Now you have this extra piece 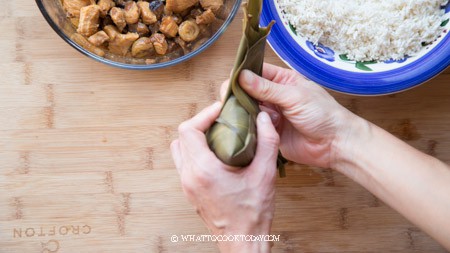 12. Fold it over to either side 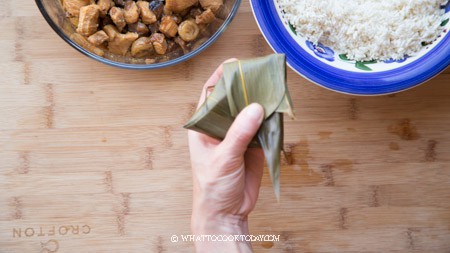 13. Secure with a kitchen twine 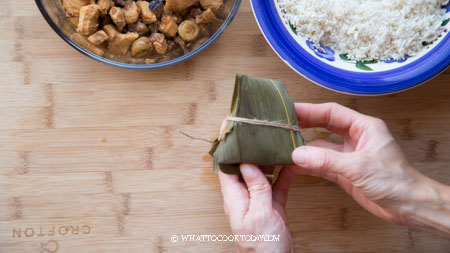 HOW TO STORE AND REHEAT BAK CHANG

You can freeze the bak chang in the freezer and it’s good for 6 months. When ready to eat them, you don’t thaw them. They can go straight from the freezer to the steamer with boiling water and steam for about 10 minutes on high heat or until heated through. You can also reheat them in a microwave on high on 1 minute increment until heated through.

This No-wrap Bak Chang recipe is easy to put together with the same great taste. Thanks to mama for the recipe and thanks Fuschia, for another great story behind this awesome food! I just had a bite and OMG!!!! Superlicious!!!! The sense of satisfaction for being able to eat it and made it from scratch!!!!! 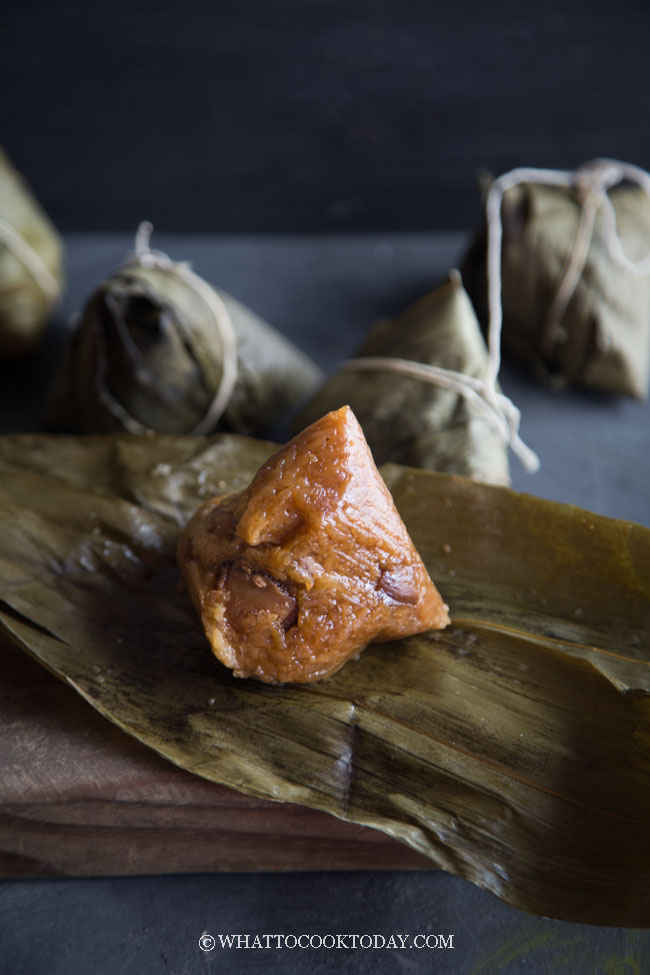 DID YOU MAKE THIS HOKKIEN BAK CHANG RECIPE? 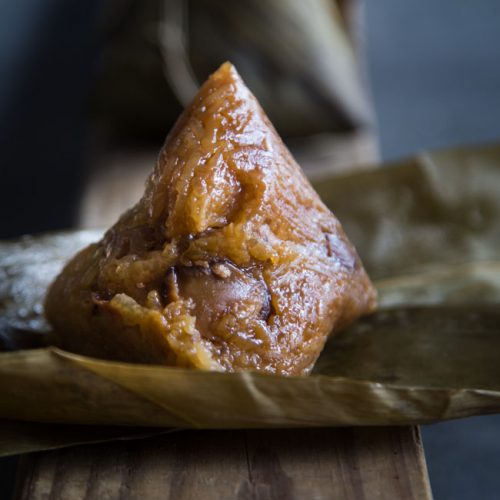 4.17 from 12 votes
12 dumplings
Prep: 1 hour
Cook: 3 hours
Total: 4 hours
Learn how to make Hokkien bak chang in a pressure cooker or with boiling method. Recipe is a no fuss but with same great taste.

Cook the meat filling the day before:

How to wrap zongzi:

Boiling on the stove:

How to store and reheat:

You also need to check out this quick method for making salted eggs. I like to use this method because I can use the egg whites for other things and the salted egg yolks for this recipe any many other recipes calling for salted egg yolks. 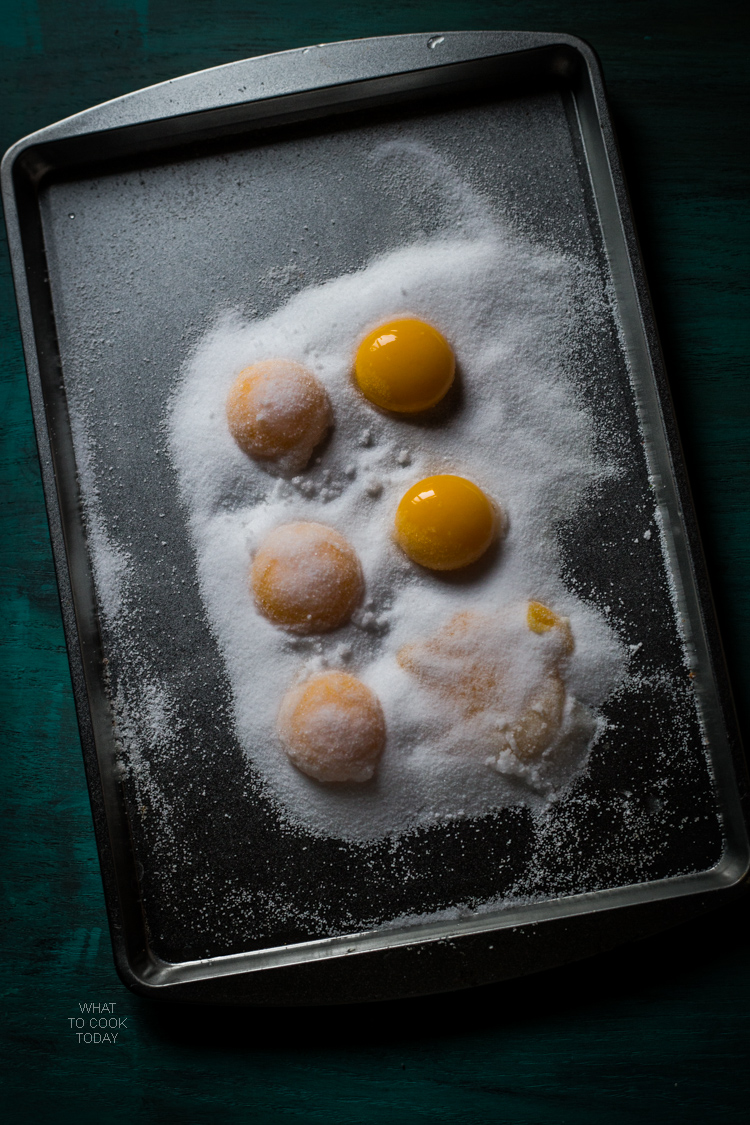 Hello Marv, thank you so much for sharing the recipe and also the step by step process. You made Bak Chang-making less intimidating! Would it make a difference in the cooking process if I use normal rice instead of glutinuous one? Perhaps the cooking hour if I use pressure cooker? Thank you once again, I am so glad to stumble upon this marvelous website.

Hi Diana, I haven’t tried this before with regular rice. It should work I would imagine. The cooking process will be the same. I’m not exactly sure how long the cooking time going to be, but I don’t think it will take as long as 50 minutes. If I may suggest trying 30 minutes first and see how it goes.