The Best Garlic Naan Bread Ever! 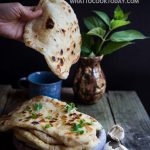 How to make the best garlic naan bread that is so soft, stretchy, slightly chewy, and garlicky that you will love tearing and can’t stop eating these naans. You can make overnight naan bread with this recipe too. 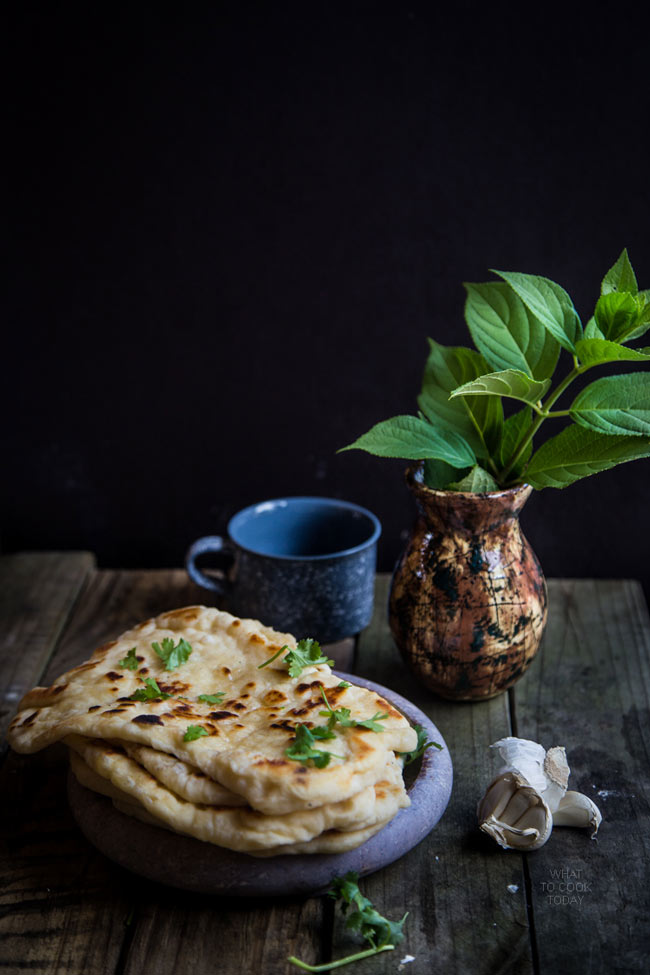 I chose to type this recipe at 10:00 pm at night and I had no one else but myself to blame. My mind is just lusting over the thought of me tearing these soft stretchy naans endlessly. STOP! (but kinda don’t stop?) Anyway, my brain is almost near to this “Let me rest” point. It’s been a LONG LONG day of photo taking, video shooting, cooking, and projects. It’s pretty exhausting but kinda fulfilling at the same time. I love this garlic naan bread recipe and many of you who have tried it have also told me the same (THANK YOU!)

This homemade garlic naan bread recipe uses yeast to leaven the bread. It’s not as quick as the no-yeast version of naan bread, but it’s so worth it! I love the good ol’ yeast versus just leavening the bread with baking powder. I’m telling you, my kids literally fought over the last piece! (and I thought I made too much!) 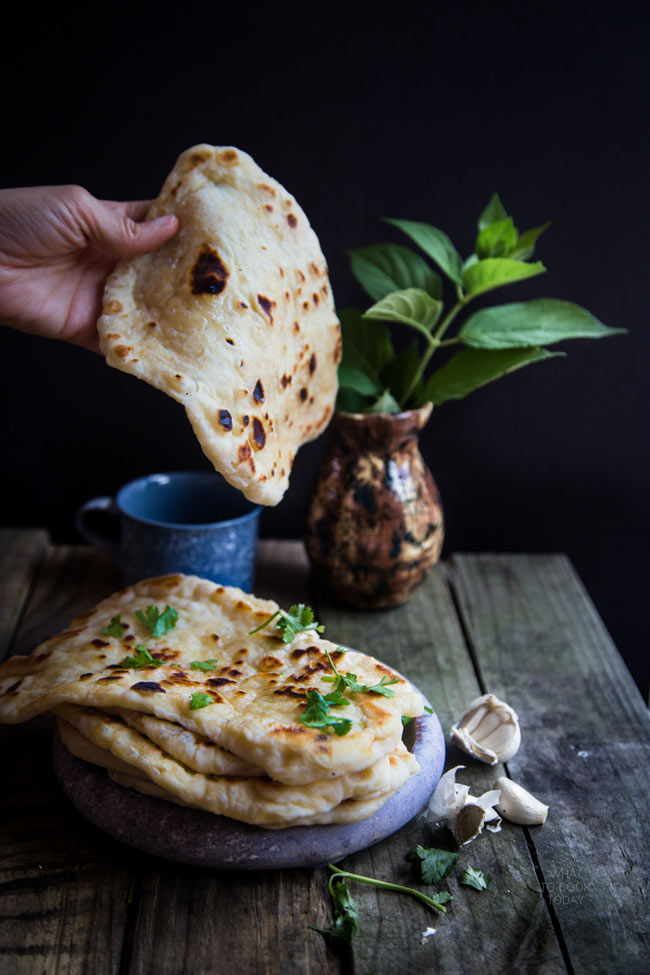 WATCH HOW I MADE GARLIC NAAN BREAD

HOW TO MAKE THE BEST HOMEMADE GARLIC NAAN

1. Make the dough
Combine flour, yeast, sugar, salt, baking powder and garlic in a mixing bowl. Make a well in a middle and add yogurt and water 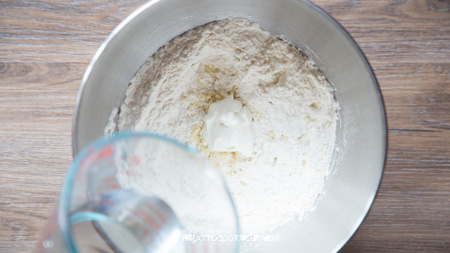 2. Knead the dough
If you going to knead by hand, gradually work the dry ingredients into the wet ingredients to form a rough dough and knead for about 10-15 minutes until you get a smooth dough if you knead by hand. If you are using a stand mixer to knead, use a dough hook attachment and knead the dough knead on medium speed for 2 minutes or until the dough comes into a mass and no longer sticky to touch (maybe just a bit sticky to touch). The dough shouldn’t break when you stretch it. If it does, it needs a bit more kneading. Take care not to over knead the dough too. 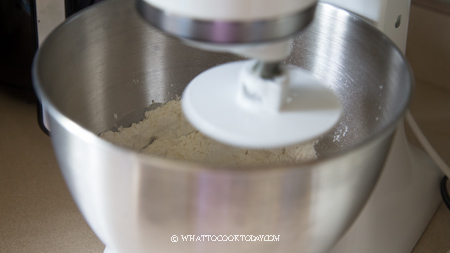 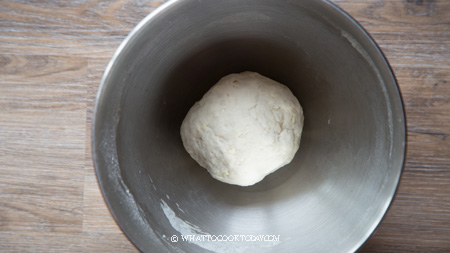 3. Proof the dough
Lightly oil the bowl and then cover with plastic wrap and let the dough double in volume at a warm place. How to proof the dough in winter? You can use your oven’s bread proof function if you have one or turn the oven to 170 F (the lowest it can get) and then turn it off and after 15 minutes I let the dough proof in there until doubles in size. Works wonderfully! 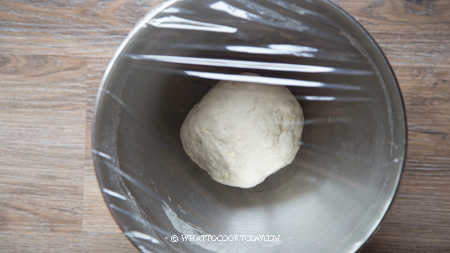 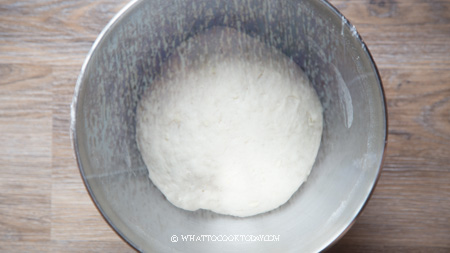 4. Shape the dough
Lightly dust your working surface and your hands with flour 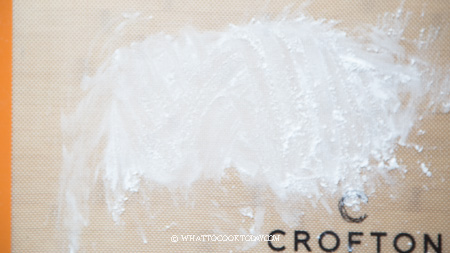 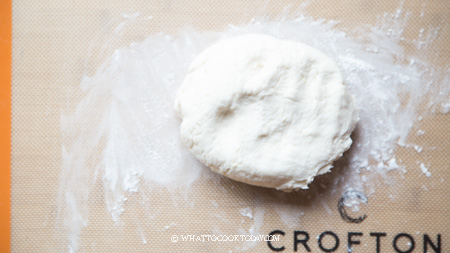 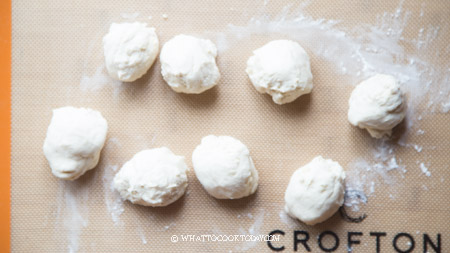 Keep them covered and work with one dough at a time. Roll the dough out into about 6-inch irregular oval shape using a rolling pin or just use your fingers to stretch the dough out 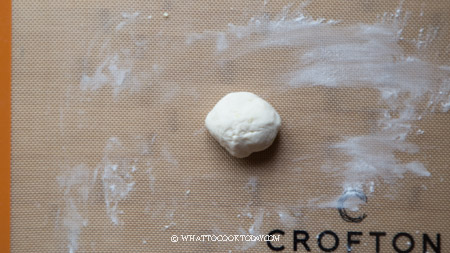 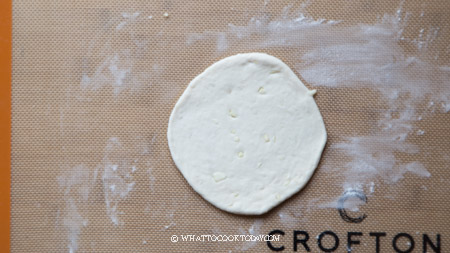 5. Cook the bread
I highly recommend cooking the naan on a cast-iron skillet. It retains heat very well and great heat distribution too.
Heat up the cast-iron skillet until stonking hot. You can see smoke starts to rise 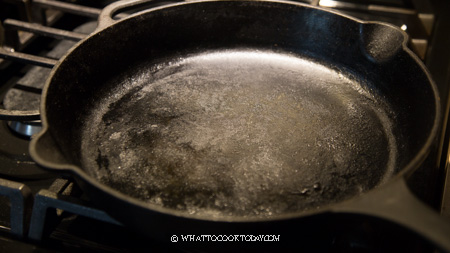 Brush the skillet with some melted ghee 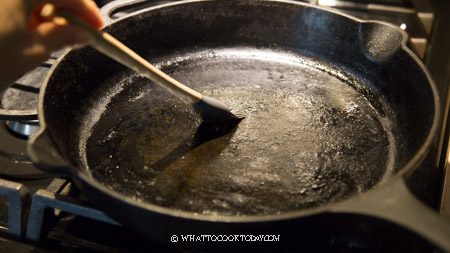 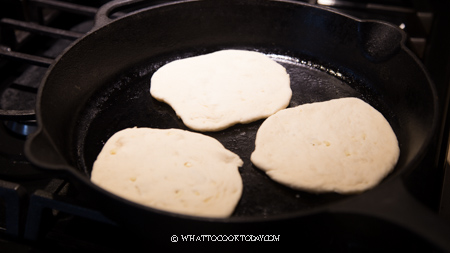 Brush with some ghee/butter and flip to the other sides and cook for another 1 minute or less. 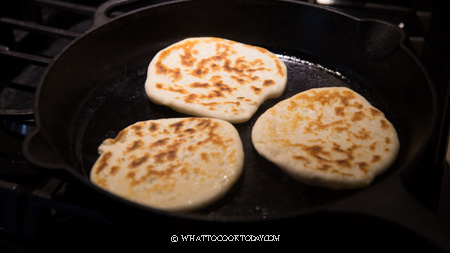 Remove from the heat and brush with more melted ghee and garlic combo if you wish. Continue with the rest of the dough and stack them up as you cook them. Serve warm with other dishes 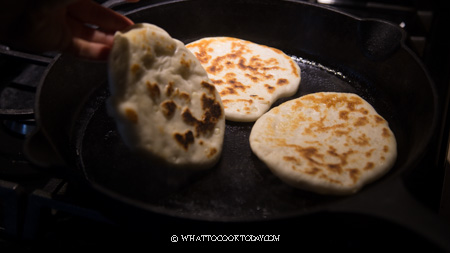 Use Chakki Atta flour, which is stoneground wheat flour, in India. They have high gluten content and can resist that tearing and give you soft yet chewy texture that I craved for in naan or any bread really! The closest substitution for this is bread flour. All-purpose flour can be used too, but trust me, side by side comparison tells me they are not as good as when I made them with bread flour or chakki atta flour.

2. HOW TO MAKE OVERNIGHT NAAN BREAD?

Instead of letting the dough rise in the warm place until it doubles in size, after you are done kneading the dough, cover it with plastic wrap or transfer the dough to a large zip lock bag you have sprayed with cooking spray or simply smear some cooking oil inside of the bag. Let the dough rise in the fridge until the next day. Bring the dough out and let it comes to a room temperature, probably about 1 to 1 1/2 hours before you plan to cook the naan. Transfer to a lightly floured surface, punch the dough down and proceed as instructed in the recipe.

3. HOW LONG CAN I KEEP UNCOOKED NAAN DOUGH?

The uncooked dough that you have kept in the refrigerator to rise can be kept for up to 3 days.

4. CAN I MAKE NAAN BREAD WITHOUT A TANDOOR?

It’s not news anymore that naan is traditionally cooked in a tandoor on very high heat. Cooking the naan on a pan really works for me too. I highly suggest cast iron pan because it gives equal heat distribution and the pan can get really hot. I get that nice bubbly and a bit of char and the bread still turned out soft and chewy and I just love tearing them to eat.

5. HOW TO COOK NAAN IN THE OVEN

I really prefer cooking naan on the stovetop, on a cast-iron pan. If you choose to cook in the oven, preheat your oven to 500 F with a baking stone in there. Make sure there are no little bits of food from previous cooking in there or your oven will be smoky. Place 2-3 pieces of your naan bread on the stone and bake for about 8 minutes or until cooked, and then switch to high broil and then just broil quickly to get that nice brown spots. The longer you bake the naan, the crispier the naan gets, you don’t want crispy naan!

6. GHEE OR BUTTER TO MAKE NAAN

Should I use ghee or butter? Ghee will get my vote, but butter is definitely acceptable too.

7. HOW TO STORE COOKED NAAN BREAD?

Once the naan bread is cooked, let them cooled down completely and then you can stack them up and cover with plastic wrap. These will keep in the refrigerator for about 5 days. If you plan to keep longer, freeze them. If freezing, I like to individually wrap the naan and then put in a freezer bag to prevent freezer burn. Frozen naan can be kept for up to 2 months.

8. HOW TO REHEAT COOKED NAAN BREAD?

If frozen, thaw in the refrigerator or on the kitchen counter. I usually like to sprinkle the naan with a bit of water, not too much, just to keep it moist. Loosely cover with aluminum foil. The naan can then be reheated in the oven or toaster oven at 350F for 10-12 minutes. We get rid of our microwave a while ago, but I believe you can reheat it in the microwave too after thawing. Just be sure not to use aluminum foil in there though. 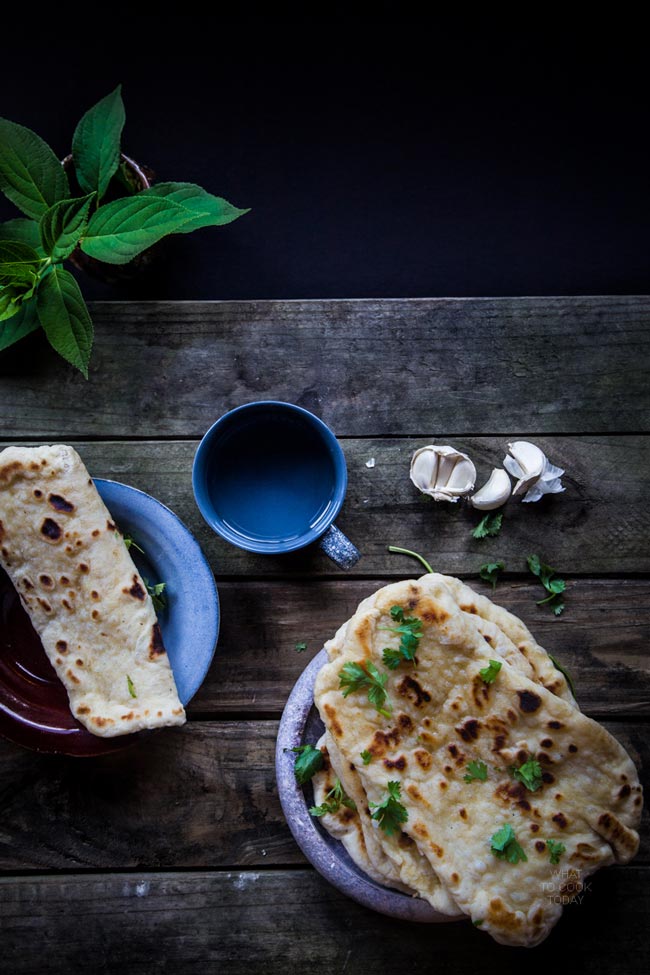 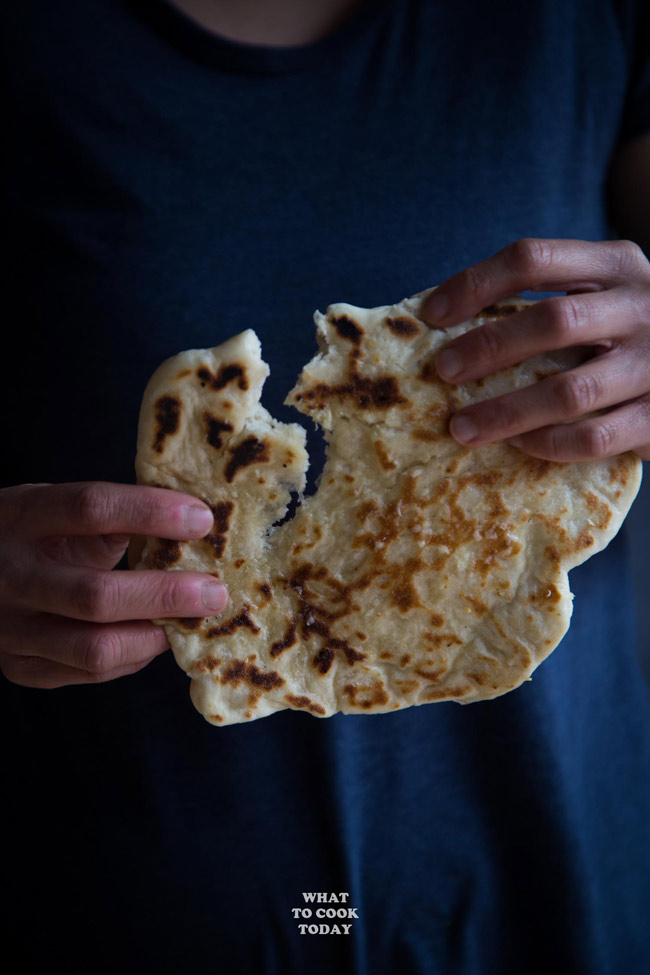 1. Make it an entree. Instead of serving naan bread as a side, I’ve used naan to make: Naan pizza, Naanwich (Naan Sandwich) to replace the bread, Naan Taco (replaces the corn/flour tortilla), Naan Quesadilla, Naan burger. Those are just a few ideas I’ve explored. I’m sure you would come up with something creative too. You just need to adjust the size and the thickness of the naan bread to suit your recipe. It’s really fun and it keeps the same old ideas fresh again!
2. Dairy-free Naan Bread
You can opt-out of using yogurt. I’ve made it once without yogurt and just add a bit more water teaspoon by teaspoon until the dough comes together into a nice mass. I like having yogurt in there for that hint of tang.
3. Omit the garlic
My kids sometimes request plain naan bread that they can eat for breakfast with some fruit spread and/or peanut butter 🙂 So, I omit the garlic when I do that
4. Add seeds
You can add sesame seeds or nigella seeds after you’ve flattened and shaped the dough. Gently press the seeds on to the dough and cook. Some seeds may get burn easily, so be careful when you cook them.
5. Cheesy garlic naan bread
You can add grated/shredded mozzarella or other favorite cheese of yours on top of the naan bread after cooking the first side and cooks until the cheese melted and gooey 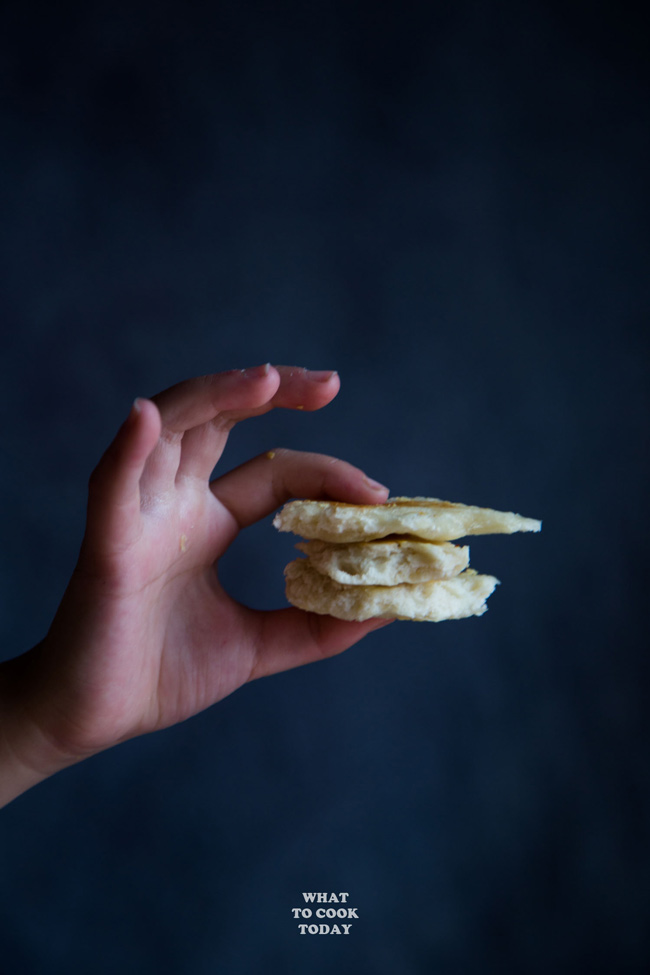 I first saw the recipe for Naan at Jamie Oliver’s site a few years ago and had modified it throughout the years I’ve made them to as shown below. 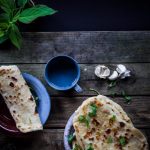 The Best Garlic Naan Bread Ever!

Stand Mixer I use:

If kneading with stand mixer:

If kneading by hand:

Cooking naan in the oven:

If not using yogurt, you may need to add more water 1 tsp at a time until the dough comes together into a mass. If you are using active dry yeast, use lukewarm water and put the yeast in and let it sits until foamy (about 10 minutes) before mixing with the rest of the ingredients in step 1

DID YOU MAKE THIS BEST GARLIC NAAN BREAD RECIPE?

Naan bread is great and this is a beautiful recipe. I will definitely try it!

We love Naan bread a lot too! Homemade is sooo good!

At the gym reading this and I am drooling

This recipe was fantastical! So good.

Hi Erin, Thank you so much for letting me know. So happy to know that you like it 🙂

I have discovered that recipe last night and did it twice since, sooo good!!
Try not to work the dough much when doing naans, the less you do, the best it is!

I’m glad you like this recipe because I’ve made them twice this week alone LOL! I agree, you definitely don’t want to overwork the dough too much.

Hi there
Love your recipe. Pushed for time today and have the dough made but will the dough keep without cooking?

You can punch the dough down and wrap them in the plastic wrapper and it will keep for 3 days. I’ve read somewhere people freeze the dough, I haven’t tried this myself, and let it thaw in the refrigerator before using.

This recipe is called ‘seriously good’ for a reason… these are amazing!!
I halved the recipe and it still made 4 large naan breads which were happily devoured by my family.
Thanks for the great recipe ⭐️⭐️⭐️⭐️⭐️

I’m glad you think that it’s seriously good too 🙂 I just made this myself two days ago 🙂 Thank you so much for your feedback!

Try baking them with cast iron skillet if you have it… Better than using “non-stick” coated pan in my humble opinion.

Perfect, thanks for such a quick response. I did end up adding about a TBSP of oil and they turned out really yummy. So much delicious garlic. Next time I will try without.

Your naan recipe says to add the cooking oil but there is no amount of cooking oil listed. I’m not sure how much to add.

So sorry for the typo. There shouldn’t be any oil for the dough. I’ve fixed the recipe. Only melted ghee/butter to brush the naan later after cooking.