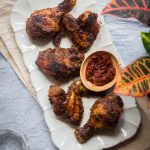 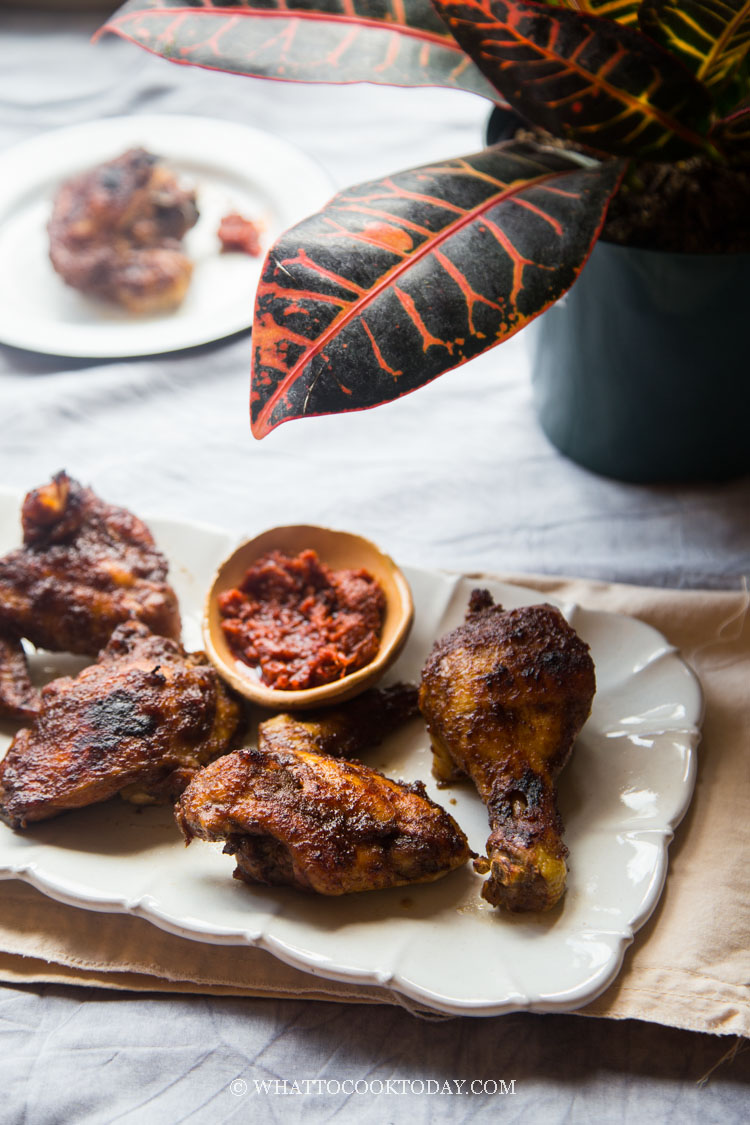 AYAM PANGGANG BUMBU KECAP
Ayam panggang bumbu kecap is traditionally made by boiling the chicken in spices, herbs, and kecap manis and then they are baked. It’s not unusual to see many Indonesian recipes usually cook the meat twice, first to infuse the aroma from spices and herbs and then finished cooking by frying, grilling, or baking. 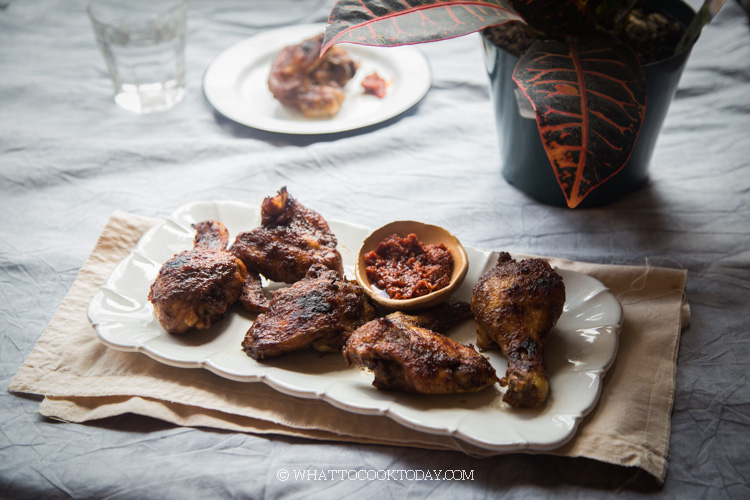 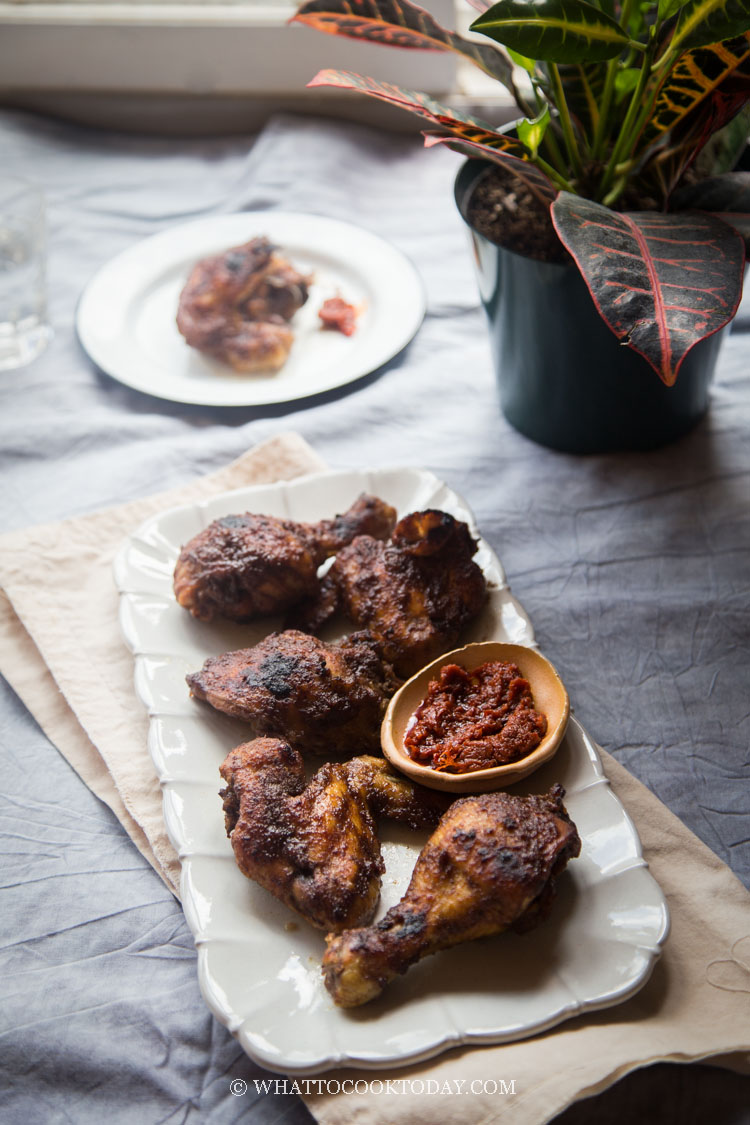 INDONESIAN KECAP MANIS
One of Indonesian staple ingredients is kecap manis if you ask me. Indonesian kecap manis is not only thick, and dark, but it is also sweet because of the palm sugar. We don’t necessarily use it in every single recipe, not so much in Indonesian Chinese recipe, but traditional Indonesian recipes call for kecap manis more often than not. We use it in nasi goreng, ketoprak, sate ayam kecap, tahu goreng kecap, sambal kecap pedas, tahu dan tempe bacem. These are just to mention a few. Kecap manis is also used to marinade meat, and also as dipping sauce. My favorite kecap manis is this kecap manis cap bango. Many Indonesians will tell you that too. But if you can find this brand, kecap manis ABC is a great substitute too. 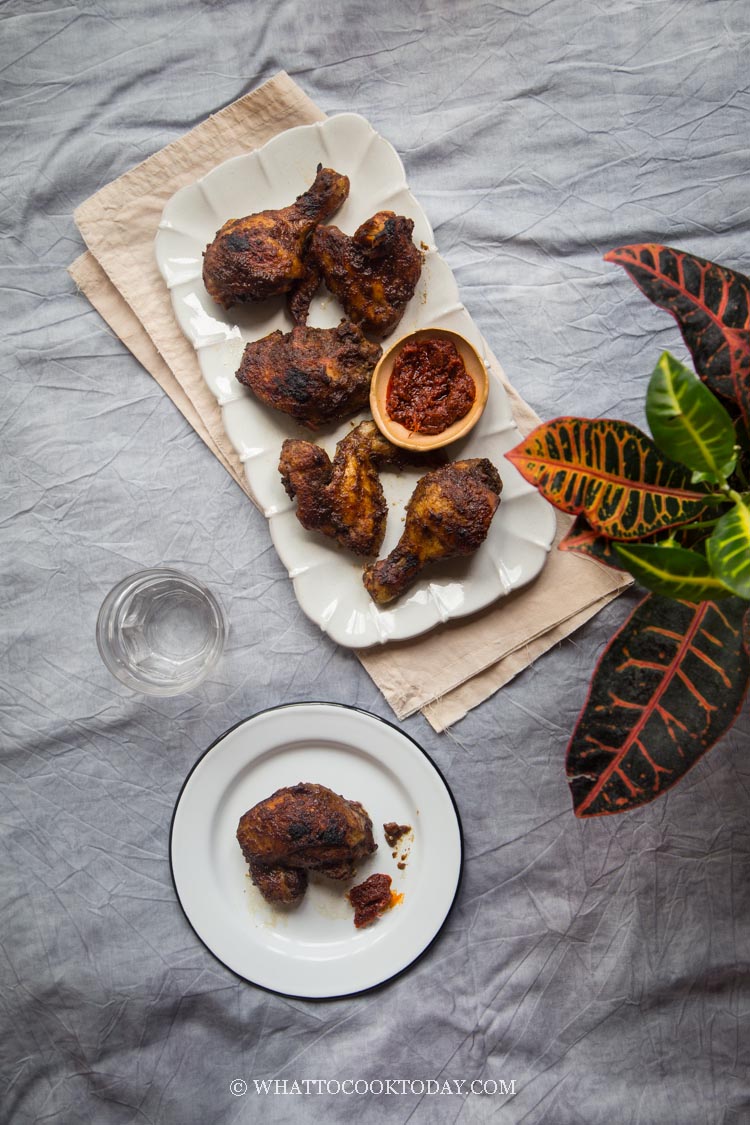 HOW TO MAKE AYAM PANGGANG BUMBU KECAP
1. Rub the chicken with the ground paste all over
2. Place chicken pieces in the inner pot of instant pot, pour 1/4 cup water and pressure cook on high for 10 minutes
3. Release pressure immediately
4. Strain the juice and keep the solid
5. Mix the solid with basting ingredients
6. Brush the chicken pieces with basting sauce
7. Broil in the oven until golden brown and slightly char. Do not walk away during the broiling process 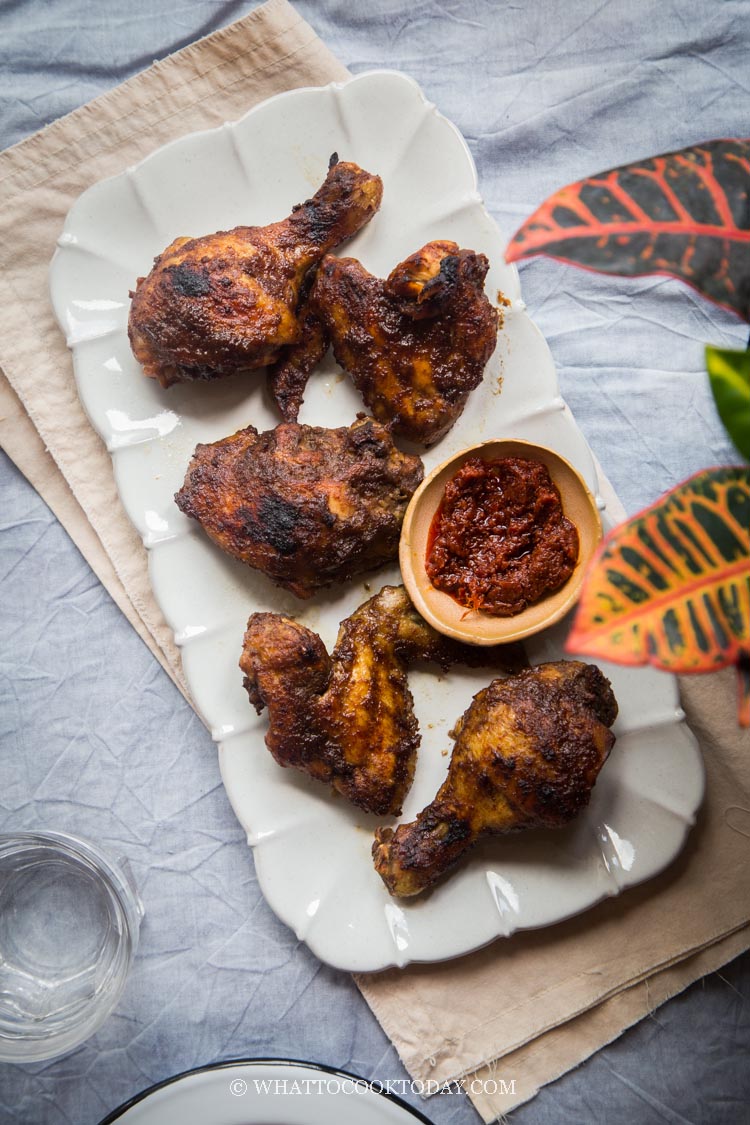 MAKE-AHEAD AYAM PANGGANG BUMBU KECAP
This will come in handy when you are getting ready for party or just simply because you are prepping for the rest of the week. Here’s how:
1. Presure cook the chicken in the presure cooker as written in the recipe
2. Strain the juice and keep the solid. The solid can be keep in the refrigerator for up to 1 week
3. Let the chicken cool down for 1 hour and then freeze the chicken pieces in smaller batch
4. When ready to serve, thaw in the refrigerator
5. Get rid of any extra liquid after thawing
6. Combine the solid with other basting ingredients and brush this on the chicken pieces
7. Broil as directed in the recipe 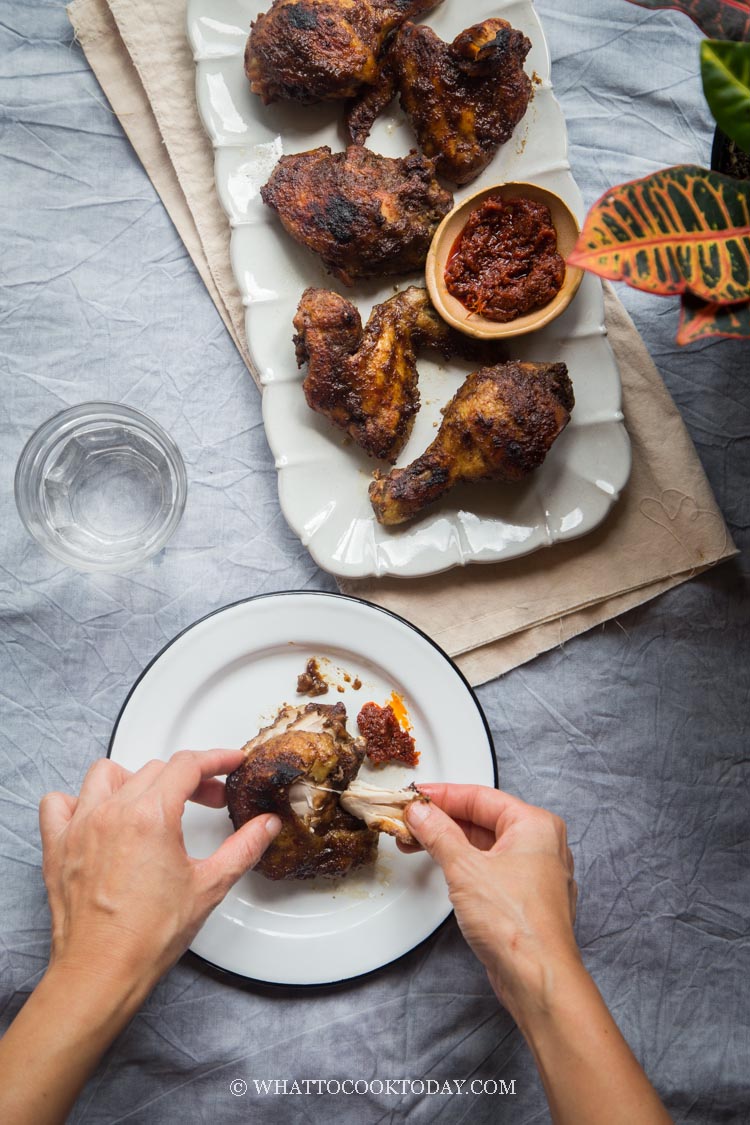 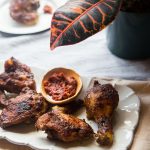 You can serve with:

Pressure cook the chicken (can be prepared one day before):

You may use a whole chicken and cut them into pieces or mixture of pre-cut bone-in skin-on chicken thighs, drumsticks, or wings
Tried this recipe?Mention @whattocooktoday or tag #WhatToCookToday

How to make Sate Padang

Hi Jan, I know it can be confusing, but you are right traditionally, panggang and bakar were done over charcoal as oven is not so common yet. So I guess the terms bakar and panggang are interchangeable. But in these modern days, some will do panggang in the oven and not over direct flame like bakar anymore, though some will still do so. But your understanding of panggang and bakar are definitely correct 🙂

What do you do with the strained cooking liquid ?

You can either keep the cooking liquid to use as stock for other dish or discard it. I usually keep it, though it’s not a typical chicken stock as there’s kecap manis and other Indonesian spices 🙂

This looks yummy! What’s in the little dish in the first photo?

I am just drooling reading this recipe. It sounds so amazing. Love the flavors! Totally pinned 🙂

One of my fave Indo dishes (the other is ayam penyet)- i love the one at Plaza Sing in Singapore! Will have to try your recipe now that I live abroad!

I am addicted to chicken that look just like yours. An interesting method, I would love to try it. I remember my grandmother often cooking the chicken legs before she put them in the oven, but I have never did myself more than a couple of times. Her chicken was always very tender.