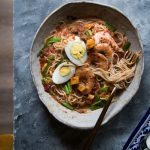 Stir-fried rice vermicelli noodles are smothered with spicy, salty, and sour gravy and topped with slices of eggs, shrimps, and fried bean curd. 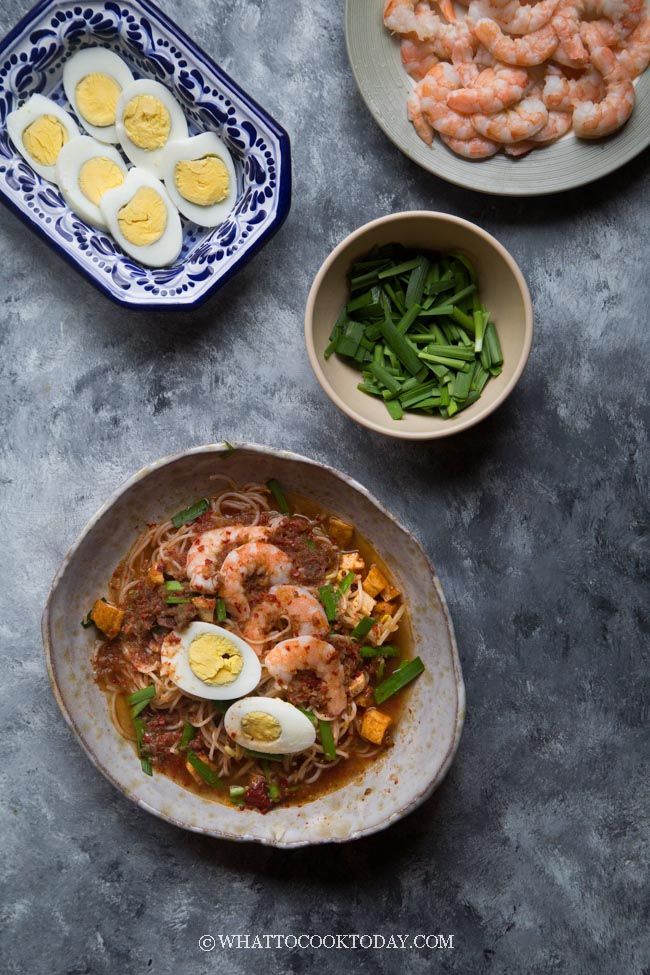 I learned about mee siam when I lived in Singapore for a short 3 years. My sister and I would walk to a market on the weekends to do some grocery and then we would stop by the hawker center to have breakfast. Bak chor mee was one of my favorites. Mee siam was my frequent too. These memories really make me miss Singapore 🙂

WHAT IS MEE SIAM?

Mee siam is said to be originated from the Malay and Peranakan cultures with some Thai (Siamese) twist in the flavor profile. Mee siam is popular noodle dish in Malaysia and Singapore. We have stir-fried rice vermicelli noodles in Indonesia too, but it’s different with mee siam. It’s more of a Chinese style. From what I learned when I was in Singapore, there are dry mee siam and wet mee siam (mee siam kuah, which is this recipe I’m sharing). The dry version is basically a stir-fried rice vermicelli (bee hoon) with umami-loaded chili paste topped with shredded omelette, fried bean curd, sometimes seafood like shrimp, and chives. The wet version, as its name implies “wet”, has gravy added and topped with pretty much the same thing, but usually topped with hard-boiled egg slices instead of omelette. 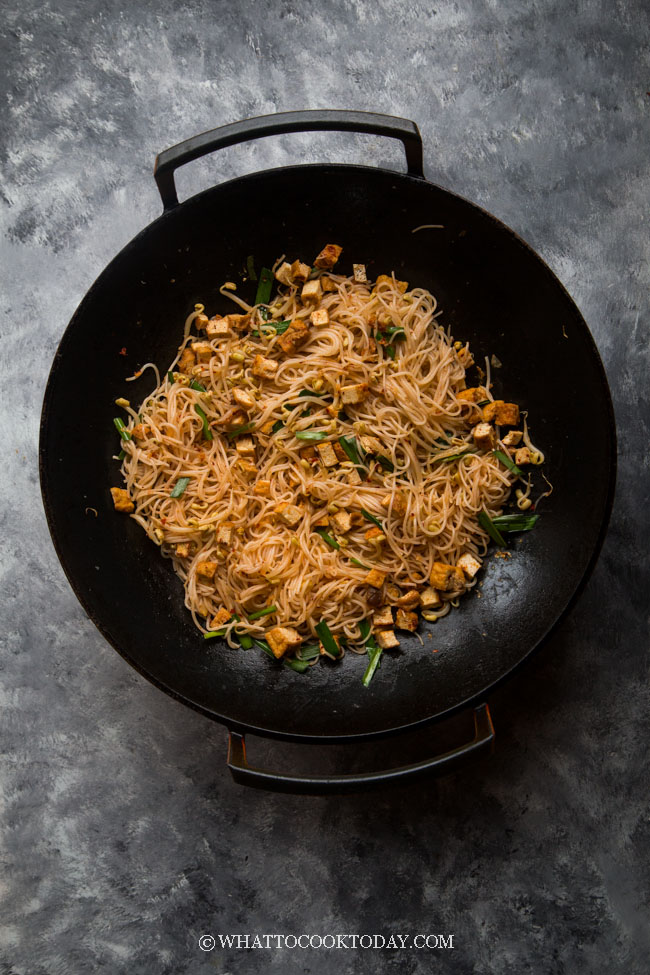 This mee siam kuah recipe calls for large fresh/frozen shrimp in the recipe. The tips I’m going to share below is more for presentation for this recipe. It’s an important step if you are going to make Vietnamese Fresh Spring Rolls because it’s hard to wrap over curled up shrimp. 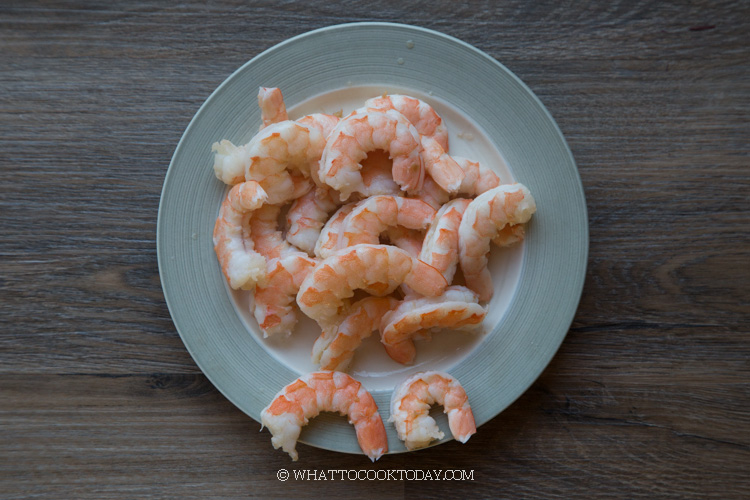 1. GET FRESH/FROZEN LARGE UNPEELED DEVEINED SHRIMP
It’s readily available this way here in the U.S. So, really, it saves lots of work and you don’t have to deveined the shrimp and trying to keep the shells intact at the same time. If you can’t find ones that are already deveined but unpeeled, you can do this: Use the knife to run through the back of the shrimp to remove the dark lines along the back. Keep the shells in tact, though (this is to prevent the shrimp from curling while being cooked) 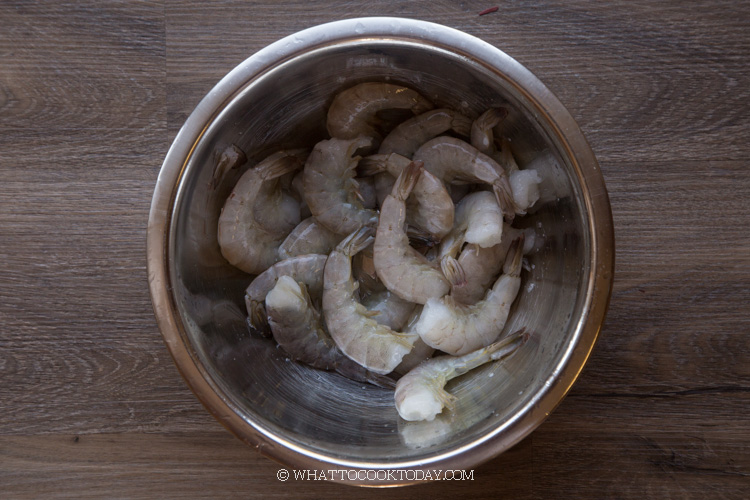 2. COOK
Bring a large pot of salted water to a boil. Drop in the shrimp (unpeeled), bring back to a boil, and cook just until pink and firm to the touch, 1 to 3 minutes. Lift out immediately with tongs or chopsticks and transfer to a plate to cool. Remove the shells when they are cool to touch. Set aside 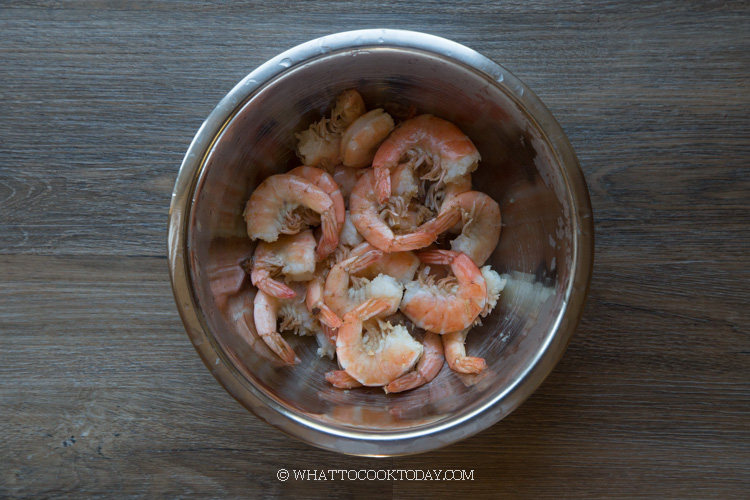 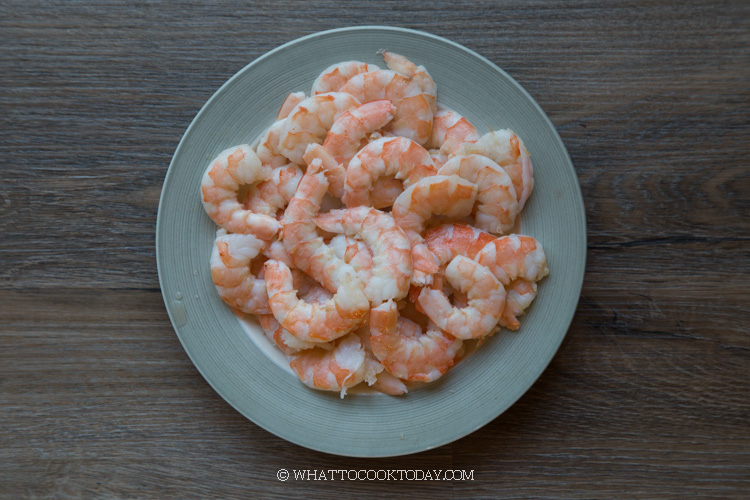 HOW TO MAKE MEE SIAM KUAH WITHOUT GETTING OVERWHELMED

The list of ingredients is not short that’s for sure. They aren’t super complicated either I can tell you. Here are a few tips to get you organized so that you don’t feel like you are slaving in the kitchen. When you have these few things done, the actual cooking is really not difficult.
1. THE DAY BEFORE
Here are the things you can do the day before:
– Make the chili paste
– Cook the hard-boiled eggs
– Cut the chives
2. ON THE DAY OF SERVING
– Soak the noodles
– Soak the dried shrimp and dried chili
– Soak the tamarind in warm water 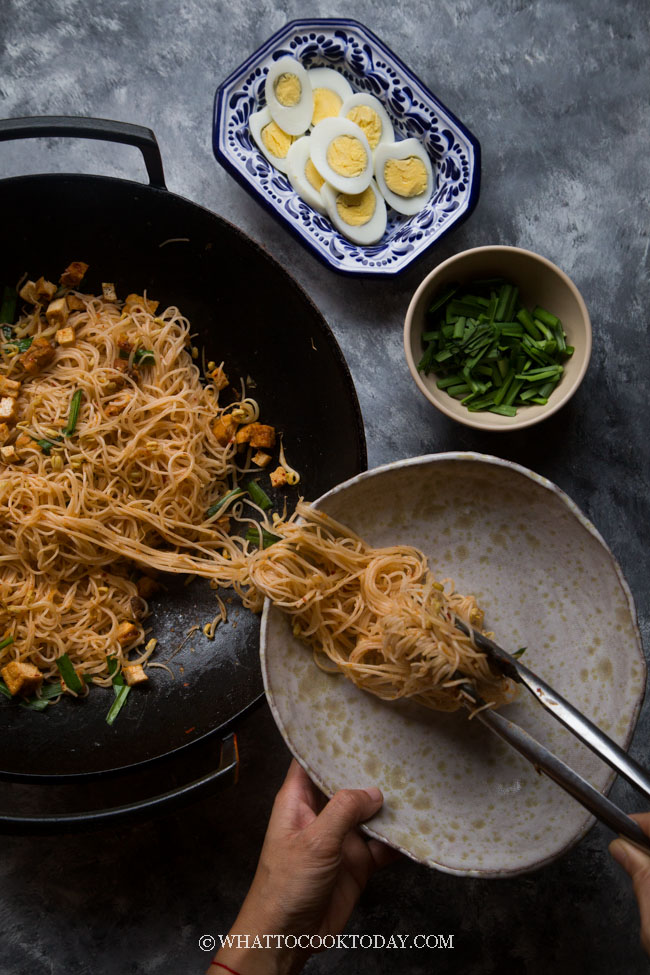 Like I’ve mentioned before, the dry mee siam is basically without the gravy. My recipe uses both the same base of chili paste to stir fry the noodles and to make the gravy. 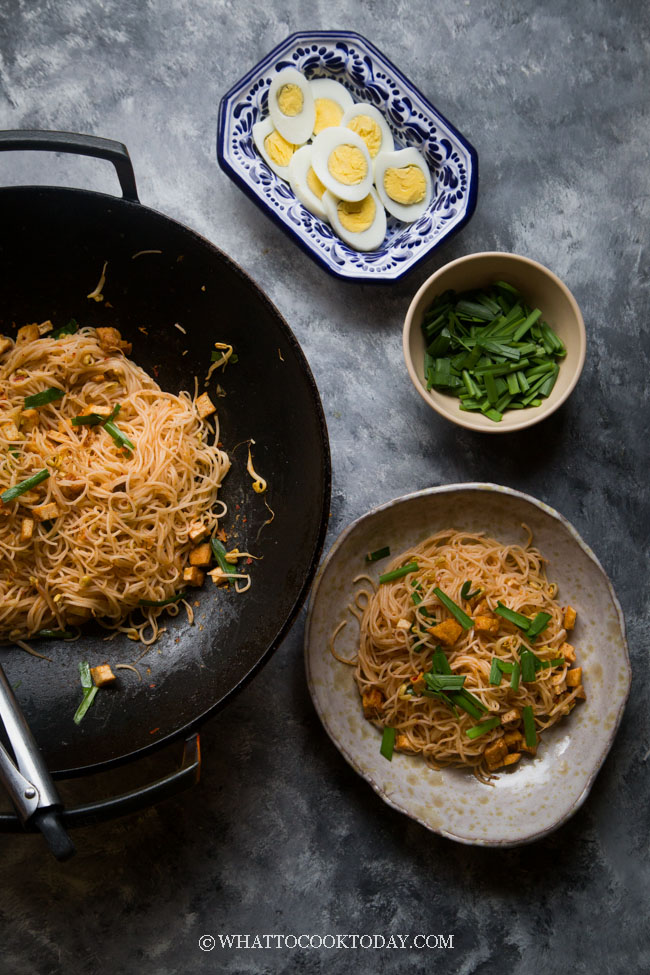 This is basically a dry mee siam without any gravy 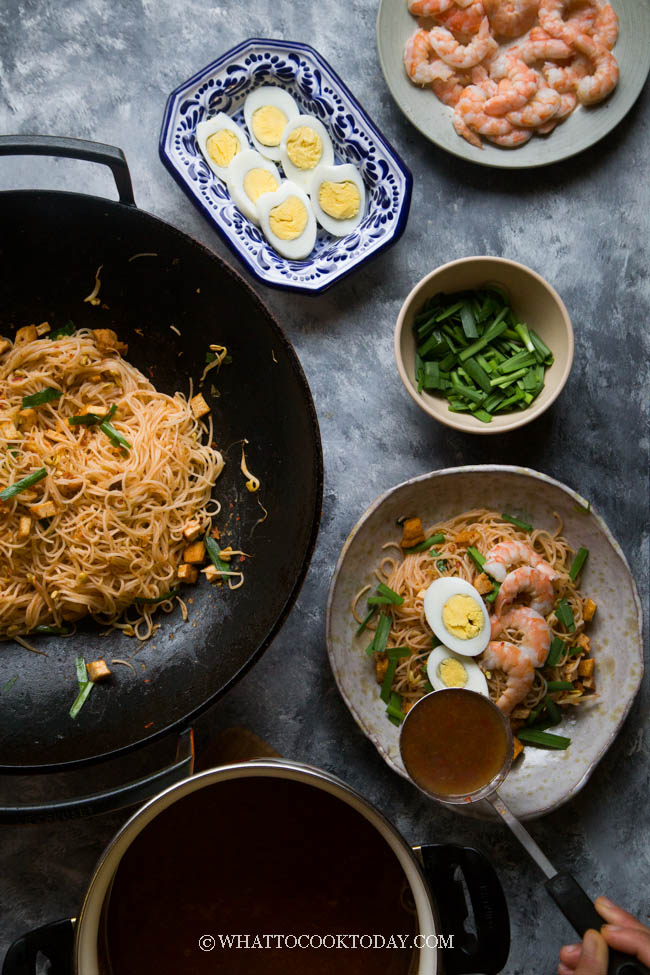 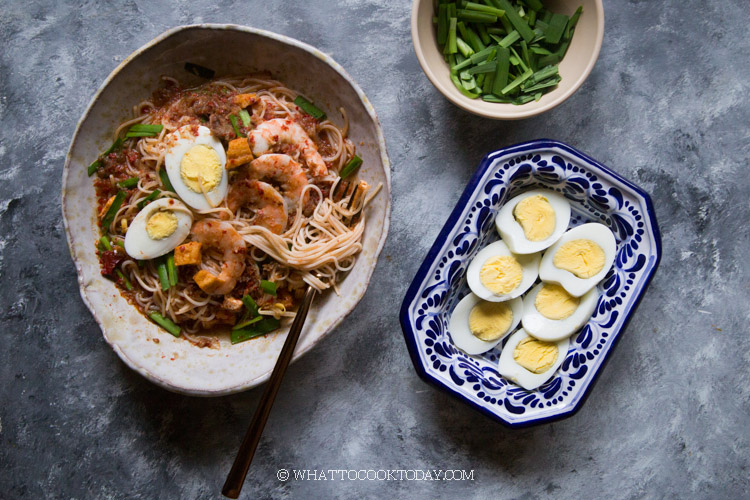 You can double or triple the chili paste ingredients and then freeze them into recipe portion. They can be kept for 3 months in the refrigerator. Just thaw in the refrigerator the night before and you are ready to cook mee siam the next day. 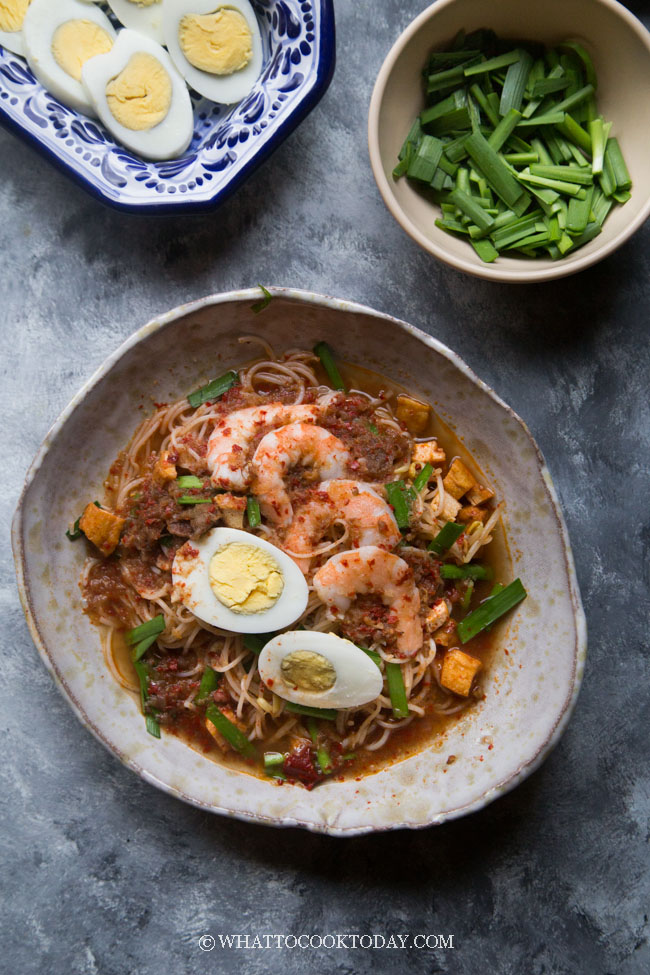 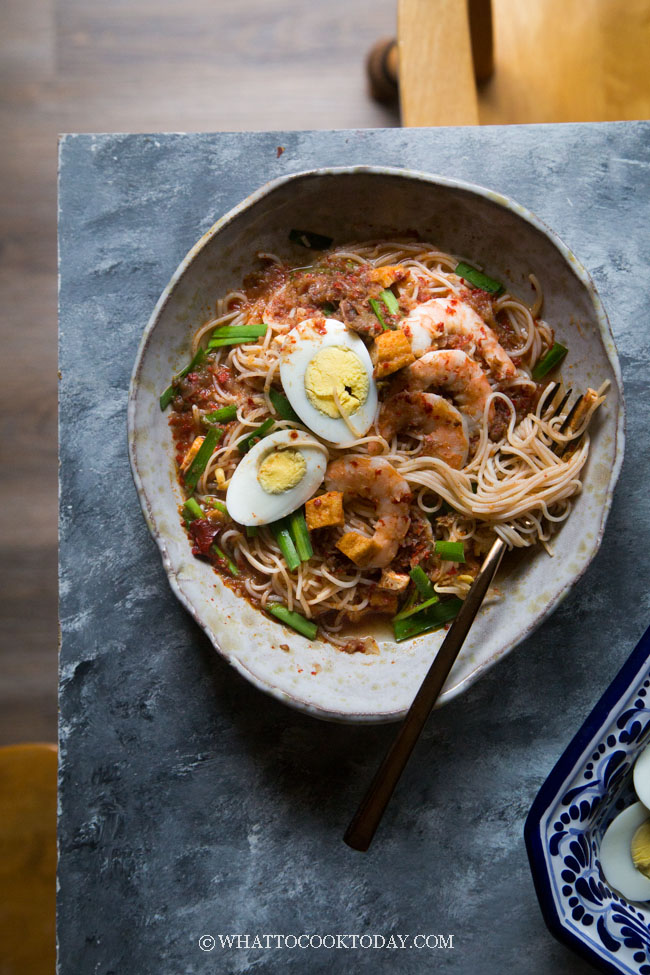 Spice paste for the noodles:

Things you can prepare the day before:

On the day of cooking:

Making the gravy and stir-fry the bee hoon:

You may want to check out the DRY FRIED MEE SIAM too. 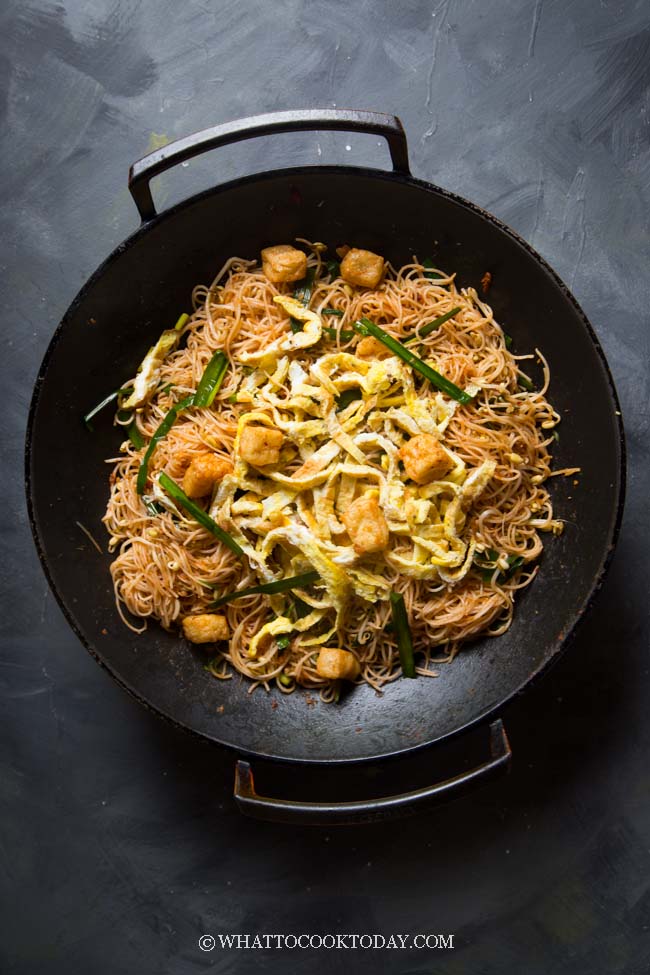 Hi Marv, I made this today and it was so good! Thank you for sharing this recipe. I tried a few of your other recipes and they were all amazing.

Hi Jan, yay!! I’m happy to know that 🙂 Thank you for your feedbacks 🙂

Hi Marv, I have a Malaysian Belacan block. Is that similar? How do I adapt it here?

Hi Jan, you can roast the belacan block on a dry pan until it’s fragrant and then break it up into smaller pieces before adding to the recipe. I hope this helps:)

Thanks for sharing the recipe. I’m going to try it this weekend! I was just wondering if instead of the chicken broth, can I instead use the water that is used to boil the prawns?

Hi Hana, you certainly can. I hope you like it 🙂

Hi Marvellina, what is the dried shrimp that is used to make the mee siam kuah – is it hae bi or 虾米皮? Thanks

Hi Gwen, the dried shrimp I used is hae bi. Hope it helps!

I’m drooling. I LOOOOOOOVE mee siam but haven’t had it in years. I’m so excited I ran across this recipe. I can’t wait to try it out!