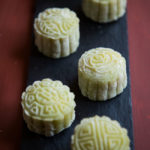 Easy pandan snow skin mooncake with custard filling is no-bake mooncake made with regular mochi recipe that stays so soft and chewy even after refrigeration. Other flavor variations and all the tips you need to know. 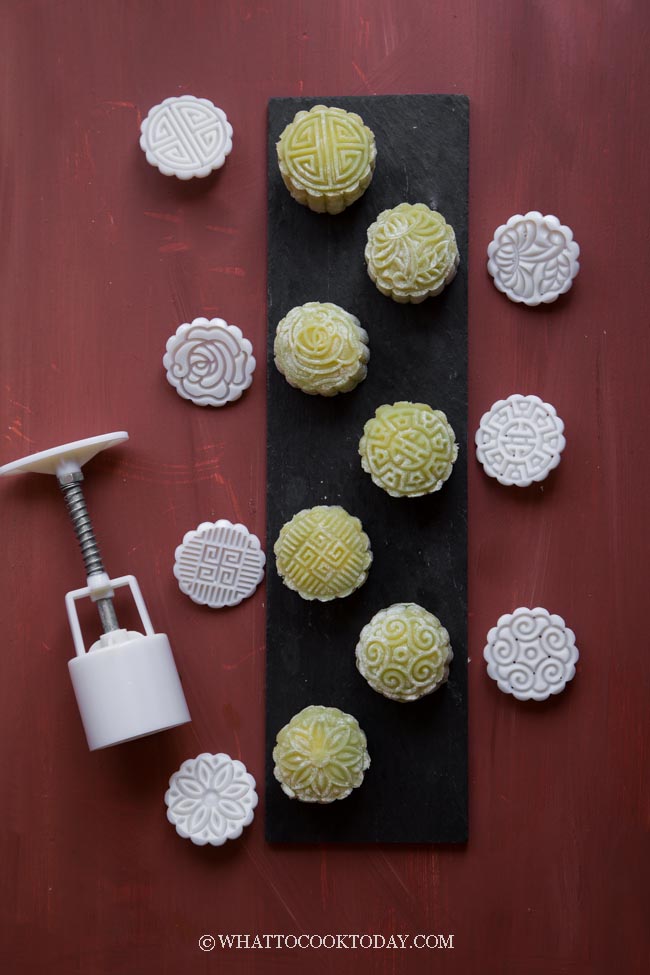 Our family is a huge fan of Japanese mochi. My kids nagged me to make mochi all the time. So imagine when I made these pandan mochi mooncakes, they were so excited! I love to make them too because they are easy to make. These Pandan mochi mooncakes are way easier than making the other type of snow skin mooncakes that requires you stir fry a large batch of glutinous rice flour before able to make the mooncakes.

WHAT ARE SNOW SKIN MOONCAKES (冰皮月饼) AND MOCHI MOONCAKES

They are called snow skin because the mooncakes aren’t baked like traditional baked mooncakes. They are also usually served chilled and have that snowy appearance. Some people called mochi mooncakes like the ones I made here snow skin mooncakes too. Other names they are known for are: Ice skin mooncakes, crystal mooncakes, snowy mooncakes All are made with very similar basic ingredients for mochi: glutinous rice flour (mochiko flour), sugar, milk, and a few more other ingredients for the fillings. 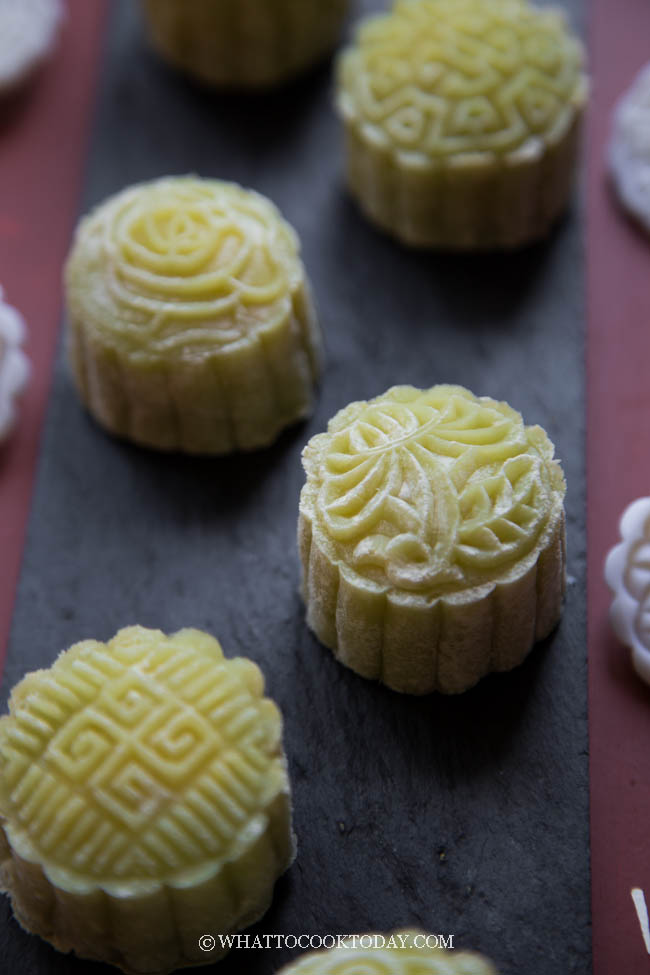 1. Foolproof
The recipe is pretty foolproof and the dough is very forgiving
2. You don’t need to stir fry a large amount of glutinous rice flour to make gao fen
The flour mixture is actually steamed and then knead into a dough, so much easier than having to stir fry a large amount of glutinous flour, which if you don’t do it right, your snow skin mooncakes will taste awful!
3. No mooncakes mould needed if you don’t want to
If you have mooncakes mould, hey..go for it. If you don’t have them, you can still just make them into delicious soft and chewy mochi. I promise you they will go fast. They were gone in 1 day at our house!
4. The snow skin stays soft in the refrigerator
So for my own testing, I actually put the mochi in the refrigerator for 5 days and they stay soft with no change of texture whatsoever for that 5 days
5. Creamy and lightly sweetened custard filling
My daughter loves custard filling and she said this wasn’t too sweet for her. We don’t have much of sweet tooth here, but you are welcomed to sweeten the recipe to your taste 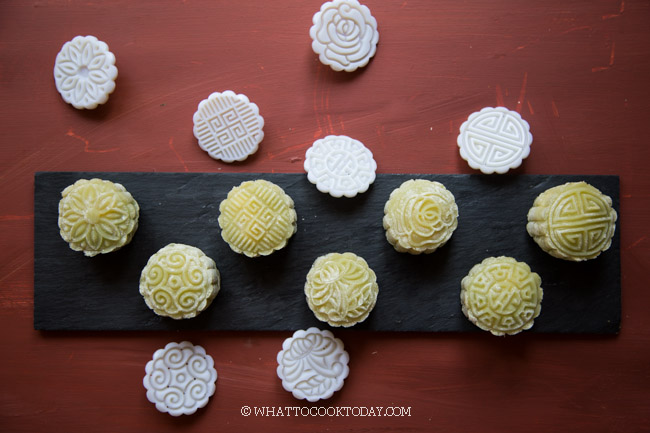 1. Glutinous rice flour/sweet rice flour/ mochiko flour
2. Mooncakes mould
I like the hand-pressed mooncakes mould. I used the 50 gr mould. You can get bigger one and just need to adjust the weight of the dough and filling

Like I’ve mentioned above that some of the traditional snow skin mooncakes are made with cooked glutinous flour and there will be no other cooking involved after that. So, it is important to make sure the flour is cooked through or the mooncakes will taste starchy and raw. In our case though, I use the flour for dusting the cakes, so I don’t want the cakes to taste starchy and raw and that’s why I stir-fry small amount of glutinous rice flour on the dry pan until they are slightly nutty/toasted.

HOW TO MAKE CUSTARD FILLING FOR PANDAN MOCHI MOONCAKE

I recommend preparing the filling the day before.
1. Whisk eggs, milk, sugar, and salt together in a saucepan. Sift in flour and milk powder. Stir to combine everything. Put on the stove over low heat. Add butter. Keep stirring until the mixture gradually get thicken to a custard consistency 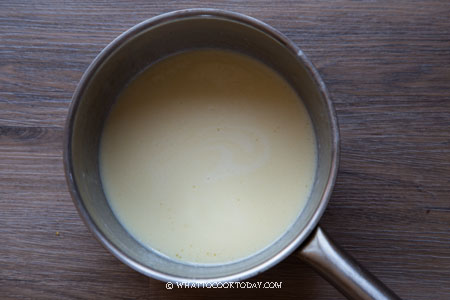 2. Cook: Put the saucepan over medium-low heat and continue to stir until the mixture thickens and pull away from the sides of the pan 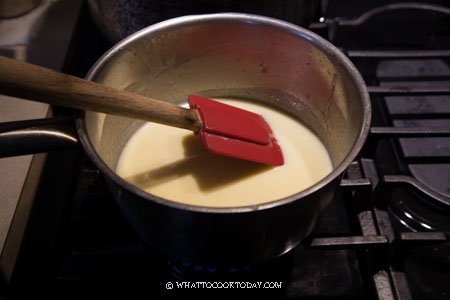 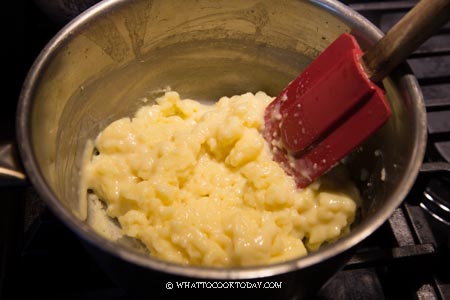 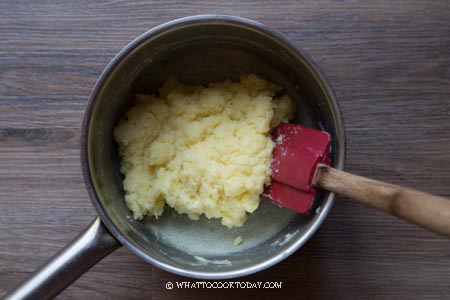 3. Roll into balls: Once they cool down completely, weigh to portion out and roll into balls for easier wrapping. Cover and chill in the refrigerator until the next day. 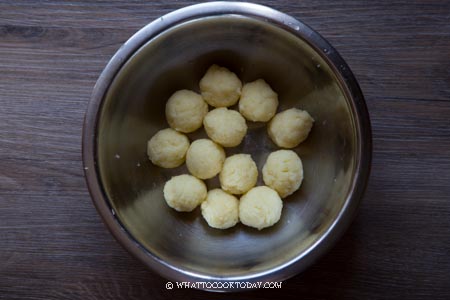 1. HOW TO MAKE GAO FEN  (TOASTED GLUTINOUS RICE FLOUR)
Stir fry about 20-30 grams of glutinous rice flour on a dry pan over medium heat until the flour turns slightly brown and smells nutty. 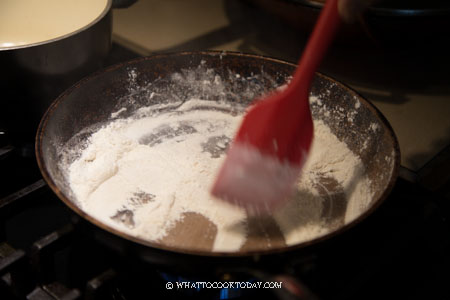 2. PREPARE MOCHI BATTER: Combine all the ingredients in a heat-proof mixing bowl. Strain to get a smooth mixture 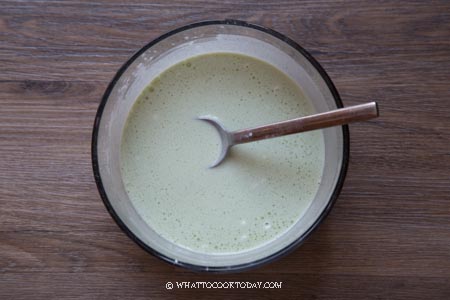 3. STEAM THE BATTER: Place this batter in the steamer and steam over high heat for 15 minutes. The batter solidifies. 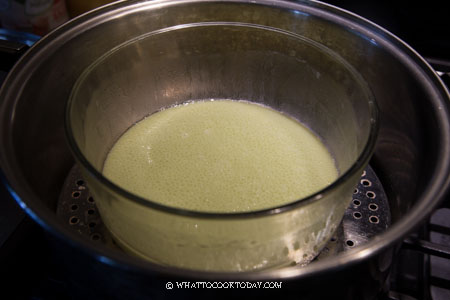 4. STIR: Use a spoon to stir the steamed mochi while it’s still hot to form a large mass of dough 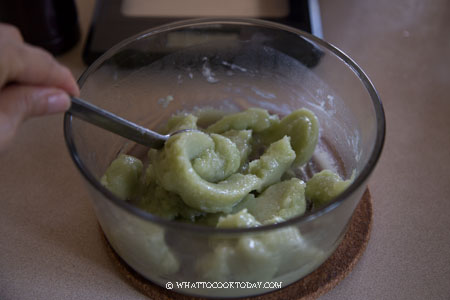 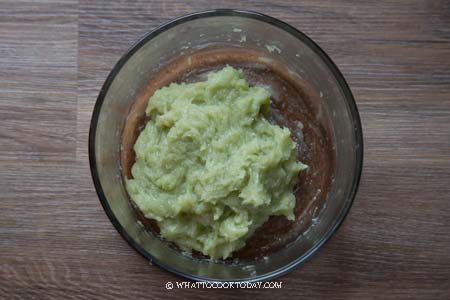 5. KNEAD: Oil your palms and knead the dough a few times to form a smooth non-sticky dough 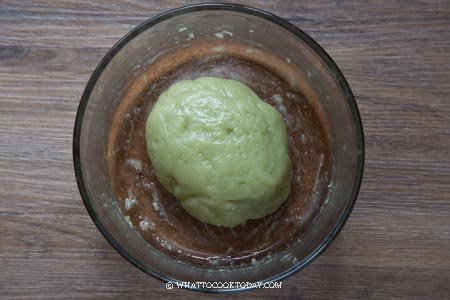 6. DIVIDE: Divide the dough into 10 smaller doughs (or less if you use larger mould-refer to the “how to adjust the mould size below) 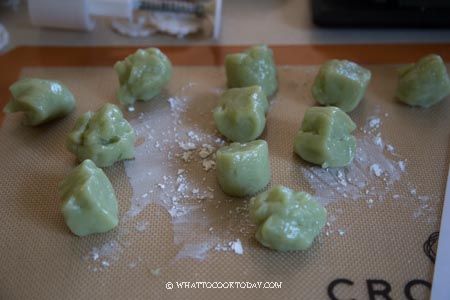 7. WRAP:Flatten the mochi dough and roll out into about 4 inches round. Place the filling in the middle and wrap around it 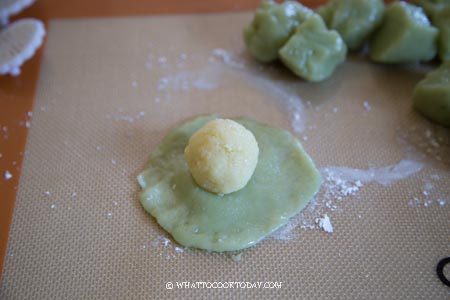 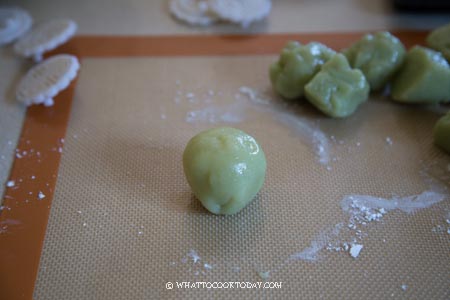 8. MOULDING: Dust the dough with cooked glutinous flour you prepared earlier. Dust off excess flour. Place this into the mould and press to imprint the pattern on the dough. 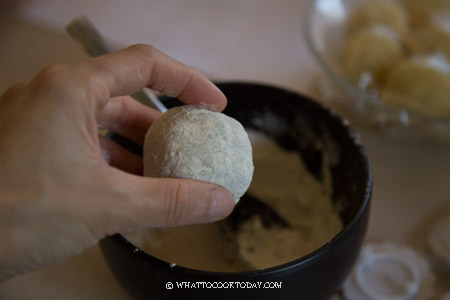 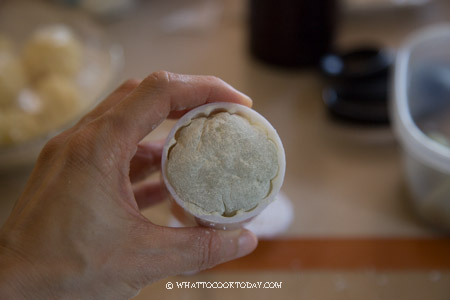 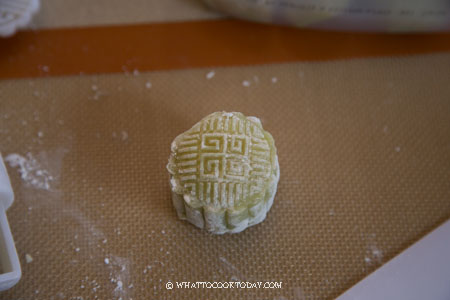 HOW TO ADJUST THE SIZE OF THE MOONCAKES WITH THE MOULD 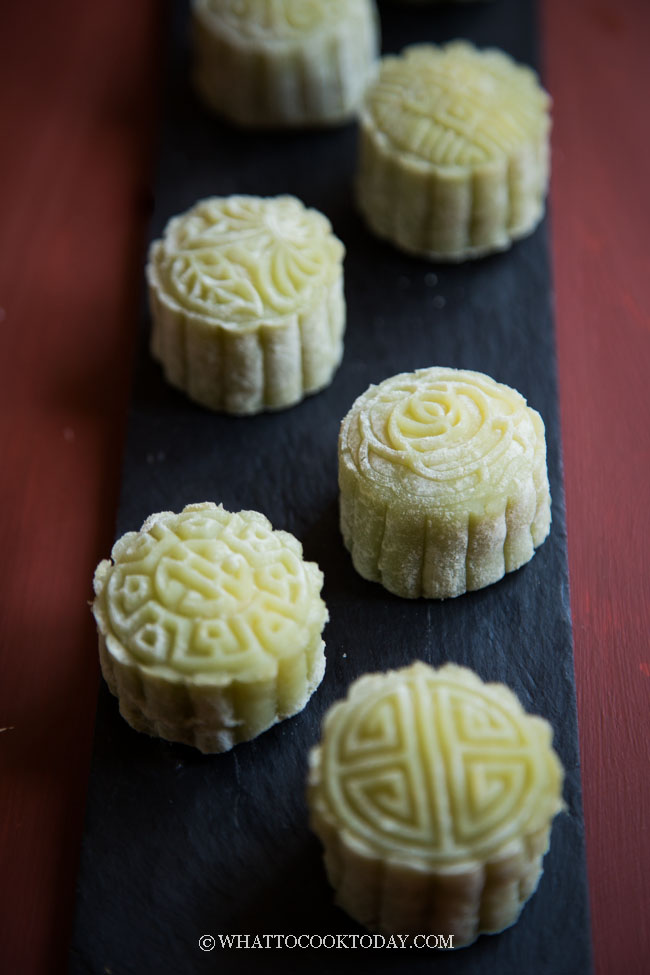 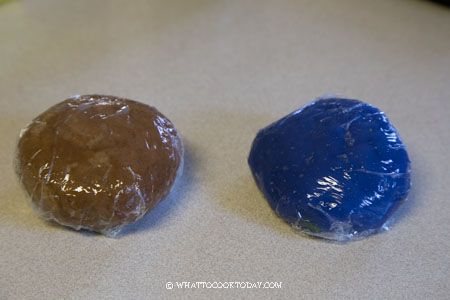 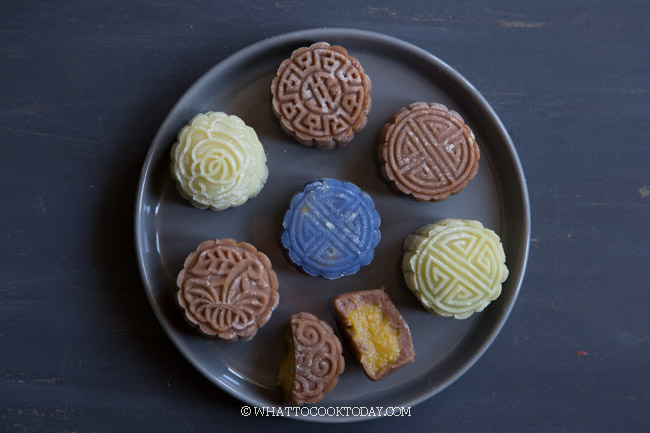 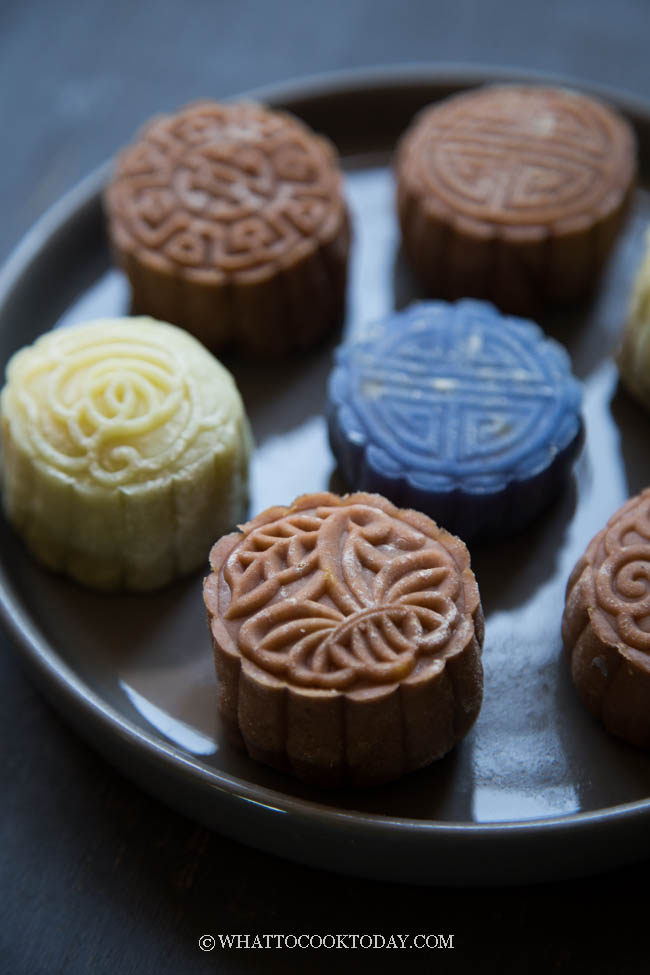 HOW TO STORE SNOW SKIN MOONCAKES

REFRIGERATOR: Mochi mooncakes can be kept in the refrigerator for 3-4 days. This recipe yields mochi mooncakes that stay soft even after refrigeration. Try to consume within 3-4 days as they are the best. The longer you keep, the drier the skin will get
FREEZER: For longer storage, place them on a baking sheet lined with parchment paper, not touching each other and let them freeze for 1 hour and then transfer to a freezer bag or container and they won’t stick to each other anymore. They can be kept frozen for up to 2 months. When ready to eat, simply thaw at room temperature. 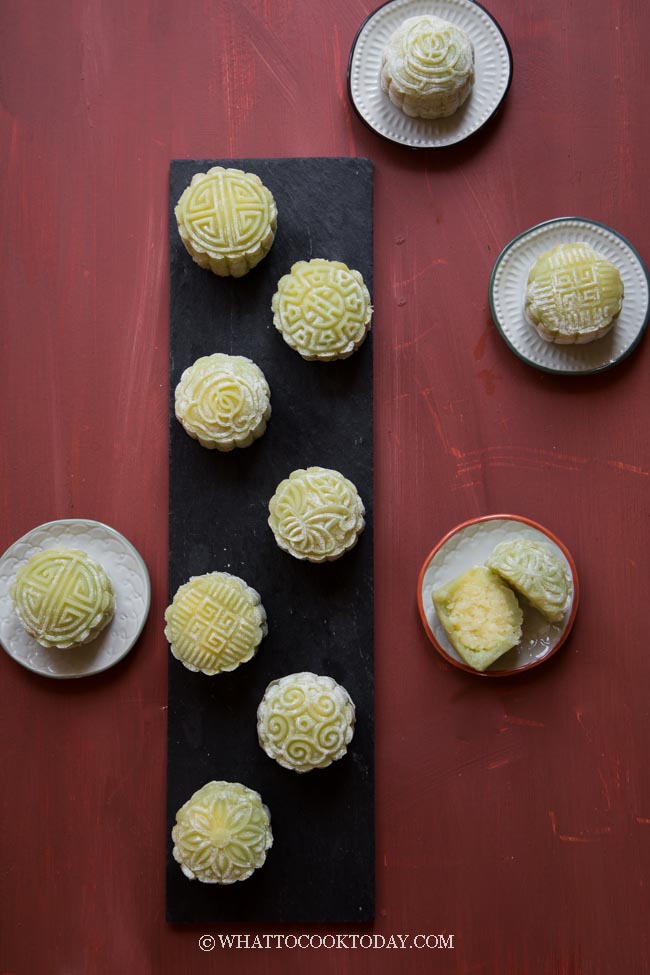 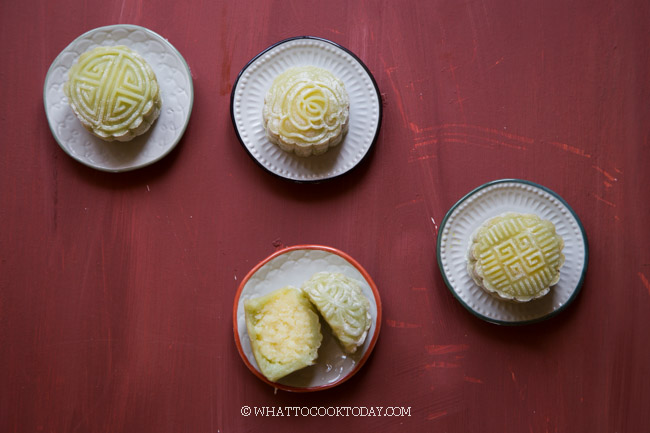 DID YOU MAKE THIS EASY SNOW SKIN MOONCAKE RECIPE? 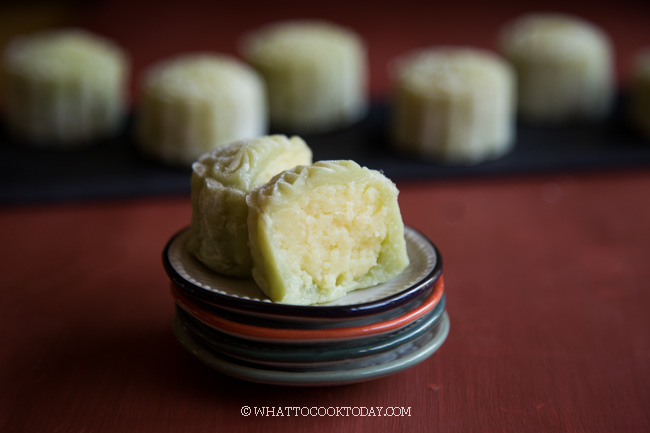 Mochi mooncake dough is adapted from My Kitchen 101.
*Recipe amount for the snowskin dough is updated to show full recipe (yield 10 pieces instead of only 5)*

Stir-fry the glutinous rice flour you will use for dusting (can be done several days/weeks before):

Prepare custard filling (can be done the day before):

Hi – do you know what the adjustments would be if its a 100g mold?

What can I replace wheat starch with? I read somewhere corn flour is but I prefer to check with you. Thanks much!

Hi Patricia, yes you can replace with cornstarch or potato starch. I hope this helps!

Hello! I made some mooncakes using your recipe and the skin stayed soft for only 2 days.
I kept them refrigerated in a plastic box but not an airtight container.
Is this the reason why the skin became dry in a short period of time?

Hi Delicia, yes you still want to keep them in an airtight container though. The dry air in the refrigerator will dry them out.

This is actually a lot easier than I thought it would be! I love how the Mochi dough stays soft even after a day or two in the fridge – not even store bought ones can do that! My son easily gobbled up 2-3 each time. I have made this three times and he’s still asking for more. Thanks for sharing the recipe 🙂

Hi Sue, I know right? I always thought that making snowskin mooncake was much harder. I’ve tried few versions that involve using “gao fen (cooked glutinous rice flour)” to make the dough and I never got good result and they hardened after I put in the fridge. This mochi dough really works for me and I’m glad you find it the same way too 🙂 Thank you for your feedback as always!

The recipe calls for melted butter but doesn’t give a measurement. How much do you use?

Hi Tanari, it’s a typing error. It should be oil and not butter. I don’t know what I was thinking when I typed this recipe. Hope this helps to clarify!

What is wheat starch, and what can I substitute it with? I have to be gluten free, and I was hoping I could make these. Thank you.

Hi Alene, wheat starch basically has most of its gluten removed, and mainly starch, not flour. It only requires a small amount in the recipe. You can use cornstarch instead of the wheat starch. Hope this helps.

Marv these are absolutely gorgeous. We love pandan and that custard filling is to die for. We are getting ready to make mooncakes this week too. I agree with you that the traditional way of making snowy moon cakes with the cooked glutinous flour is odd. We prefer the mochi texture instead too. You better make sure and have one today as your family is going to devour these if you leave them unattended. LOL Just pinned!

Wow… this looks great! Make me want to try at home too!! The hand press mould are so cool! I can only see the old traditional wooden mould here in Malaysia!

Hi Sandra,
These are really easy to make and I thought there would be hand press mould in Malaysia too!

Thanks to you I have discovered the moon cake press! My son will be stoked. I think he won’t even care what they taste like, but I hope I will make them right using your recipe. Last year he devoured so many traditional mooncakes around Mid-autumn festival that I was astonished. In his Mandarin classes the teachers have them to him, at the various celebrations in our town (we have strong Asian community) he ate even more. One of my husband colleagues sent me some so he ate them at home too…lol. I am very intrigued by the mochi take on the traditional way of making mooncakes. And buying the press so we can have some fun in two weeks:)

Wow..your son is very open-minded! They say the apple doesn’t fall far from the tree 😉 I love traditional baked mooncakes too, just suck at making them ha..ha..! but one day..one day i’m gonna attempt again! This mochi version is soooo much easier!

These look delicious! I love mochi!!

Me too! Soft and chewy mochi 🙂