This post on rice tuwo marks the beginning of our kitchen journey to West of Africa. There are so many cookbooks out there and it can be challenging trying to find the ones that you think provide authentic recipes of the countries of interest. I’ve read reviews and finally got this South of the Sahara cookbook, which focuses on the West African cooking.

I knew very little about African cooking, though I’ve tried several recipes in the past, but perhaps not enough. Those barely scraped the surface. So, I decided to go deeper into the culture.
Interesting thing I found while I was looking for African grocers here in town, I went to several different stores that generally named themselves as African grocery stores, however when you went in there, some may only carry ingredients from certain part of Africa. I remember went into two stores and they both only carries East African ingredients and the owners had no clue when I gave them the list of the West African ingredients. I told them I got this list from the cookbook for West Africa. Then they asked me to try the other store around the corner and that’s where I managed to find all the ingredients I needed. The store also carries only West African ingredients as the owner is from Nigeria.

I learned from the cookbook that in an ancient time, traders traveled the desert of Africa to trade salt and spices for gold, ivory and slaves in the south. Powerful empires such as Ghana, Mali, Songhai and Kanem-Bornu rose at the gates of the desert to control this trans-Saharan trade. For many years, this trade was the only interaction West Africa had with the rest of the world. When the Turks blocked the trade route to Asia, many searched for other routes, and that was around the African continent. The Portuguese was the first to set foot on the coast of West Africa and soon, the rest of Europe discovered the wealth this new land had to offer.

The West African coast is humid and swampy stretch of land. Seafood and coconut palm are plentiful and also cassava, cocoyams, kola nuts, and many tropical fruits and vegetables are abundance. Going through the list of the ingredients and cooking methods in the book, I quickly learned that you don’t need a lot of equipment to prepare West African dishes. The ingredients are pretty predictable too in each of the recipe, making it easy to prepare and yet flavorful at the same time.

Rice tuwo and egusi with beef were the two dishes we tried together. Someone suggested that we tried that and so we did. This rice tuwo or known as tuwo shinkafa in Hausa language (one of the largest spoken languages in Africa) is made of fine rice flour. I’ve seen varieties of tuwo made of sorghum, corn meal and yams. Tuwo is eaten like I’d say the cooked rice for the Asian people. It is eaten with other dishes, in our case, egusi with beef to go with it.

The Rice tuwo is is cooked into thick consistency and then shape into smooth rounded shape. Very easy to make and serve it with soup or stew of your choice. Recipe is adopted from South of Sahara by Elizabeth A. Jackson. 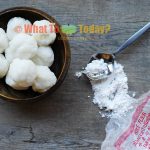