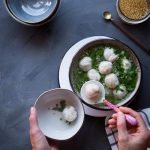 Learn how to make this Indonesian style bakso ayam and kuah bakso ayam with this easy no fuss recipe. All the tips you need to make springy bouncy meatballs. 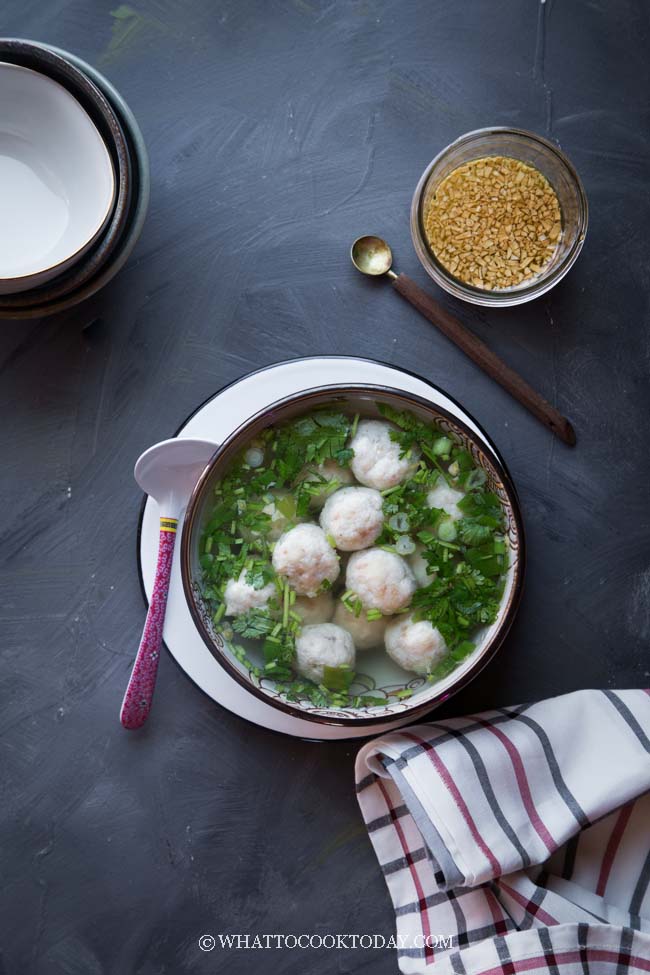 I can probably safely say that meatballs are favorites of many people around the globe. Every country or region probably has its own version of meatballs. In Vietnam, they are called Bò Viên. In Cantonese, they are called ngau yoke yuen. In Malaysia and Singapore, they are called bebola daging. In Indonesia, we call meatballs as bakso and it is said to be an adaptation of probably Chinese style meatballs and/or Dutch’s. It’s a popular food from the street all the way to the homecooks. Bakso is typically made with beef (bakso sapi) in Indonesia, but of course, it is not limited to that. Bakso can be made from fish (bakso ikan), shrimp (bakso udang), chicken (bakso ayam), beef tendons (bakso urat) and sometimes pork (bakso babi). The latter is more popular with Indonesian Chinese homecooks.

HOW BAKSO IS MADE

Asian style meatballs, in general, are different from the Western style meatballs. The former is usually firm and bouncy in texture, where the Western meatballs usually strive for the soft texture. In Indonesia, the meatballs are considered the best when the texture is really firm and bouncy, or what we call “kenyal” in Bahasa. The meat is usually ground into a paste-like consistency and then mixed with seasonings and more often than not, filled with more starch like tapioca than meat for that chewy springy texture and also to cut down cost by using less meat. 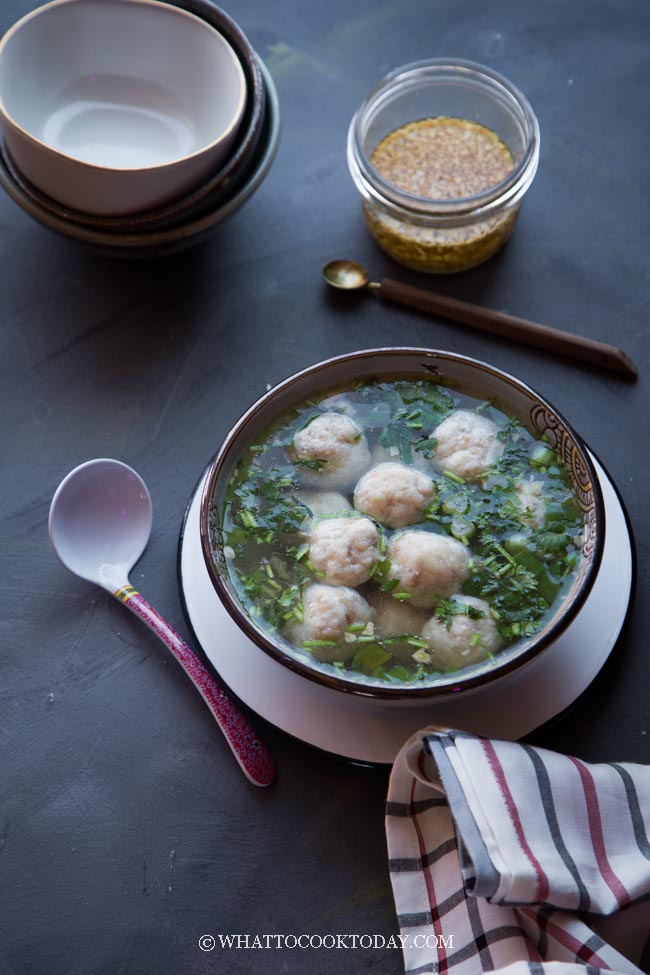 WHY HOMEMADE BAKSO IS BETTER

NO UNWANTED CHEMICALS AND PRESERVATIVES

It was not uncommon that many sellers or street vendors in Indonesia added preservative and chemical like borax and formalin to the meat paste to prolong shelf life, cut down cost, and for that extra chewiness and bounciness. These had been banned by the FDA in Indonesia (as far as I know), but other preservatives and chemical substitutes are added. For example lye (alkaline water) is also added for that extra springy texture. Homemade bakso ayam is free of preservative and unwanted chemicals.

1. NO FILLERS
To me, bakso is supposed to be made with well, meat, or whatever it is that you want to make them with. Store-bought meatballs, more often than not, are filled with many other things
2. FIRM AND SPRINGY TEXTURE
Yes, this can still be achieved naturally without adding any chemicals.
3. CAN BE USED FOR OTHER TYPE OF BAKSO
This recipe can be used with beef, shrimp, pork, fish, etc. The process of making it bouncy and springy are the same

The process of making the bakso is what really contributes to the firm and springy texture in the end. So read on!
1. FREEZE THE CHICKEN FIRST
Many recipes require that you either use ice cold water or grind the meat with ice cubes (which I hate to do). Freezing the chicken meat in the freezer really helps to eliminate adding ice cold water or grinding with ice cubes. 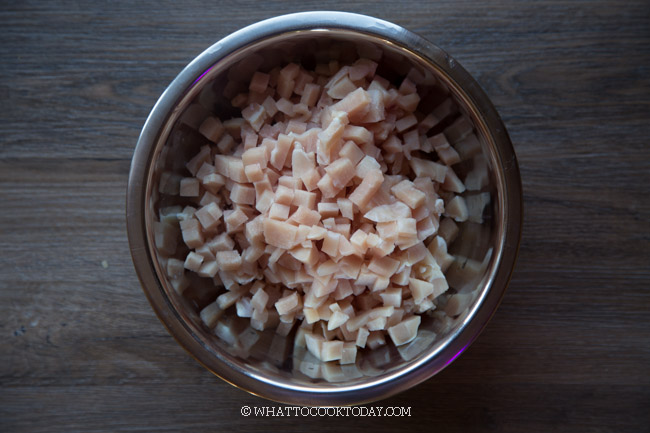 2. USE A BLENDER
You can certainly manually chop and slam the meat to the side of the bowl to achieve that homogenous paste consistency, but in this modern day, I would like to use a blender 🙂 It saves times and it works. 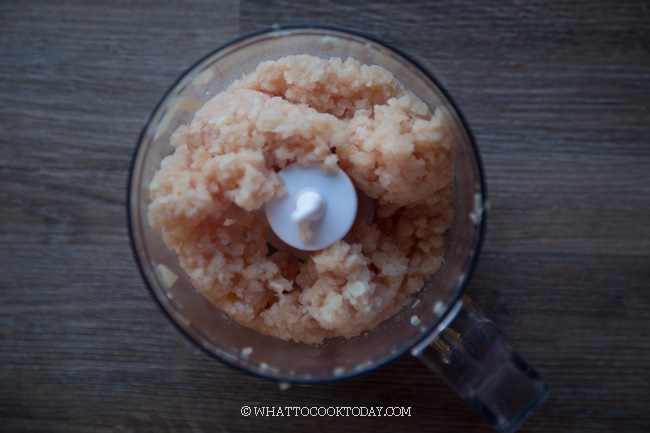 This is after all the ingredients have been mixed in. You want a meat paste consistency like this 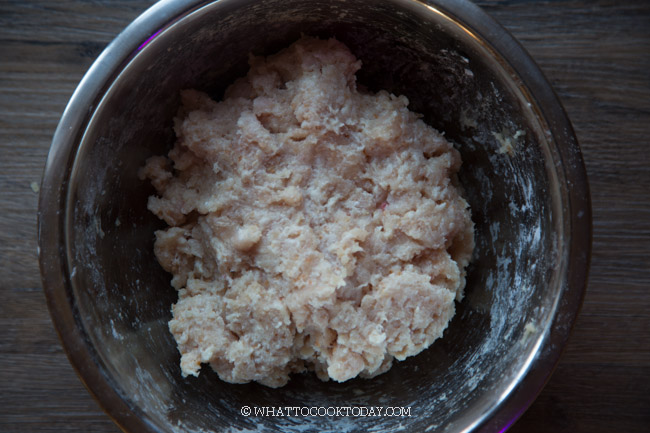 3. TASTE TEST
Bring a small pot of water to a boil and scoop a small amount of the meat paste in there, have a taste and adjust the seasonings if needed. You can also use a microwave to just heat up a small portion of the meat paste until cooked through so you can just have a quick taste test.
4. FREEZE AGAIN
Pop this meat paste into a freezer for another 30 minutes. This helps to contribute to that firm texture and they are easier to work with later when you form them into balls
5. SHAPE
Bring a large pot of water to a boil. While waiting for the water to boil, let’s shape the meatballs. Wet both of your palms and spoon the meat paste and roll into round balls. The size is up to you. 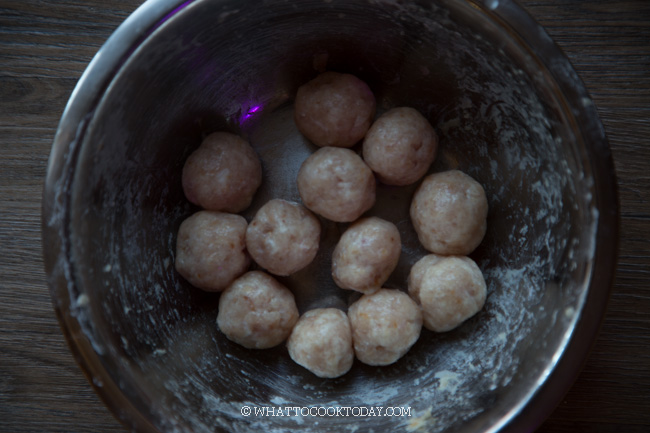 6. PREPARE ICE COLD WATER
Prepare a large bowl of ice cold water to submerge the cooked bakso later. This part is to stop the cooking process and to “shock” the meatballs, which helps to achieve that springy texture.
7. BOIL OVER MEDIUM HEAT
Once the water has come to a rolling boil, add the meatballs into the pot and LOWER the heat to medium. You don’t want to boil the bakso vigorously or they will not be springy later. Once the bakso floats to the top, they are likely to be done. Get one bakso out and cut in half to check the doneness. If they are done, scoop them out into the ice cold water and let them cool down in there. 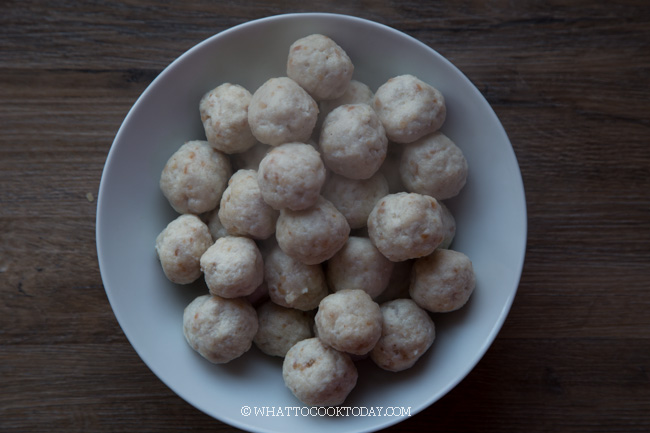 8. READY TO BE USED OR STORE
Once they are cooled down, they can be used as called for in a recipe or you can transfer them to a baking sheet, not touching each other and let them freeze for 1 hour and then transfer to a freezer bag and they won’t stick to each other anymore. 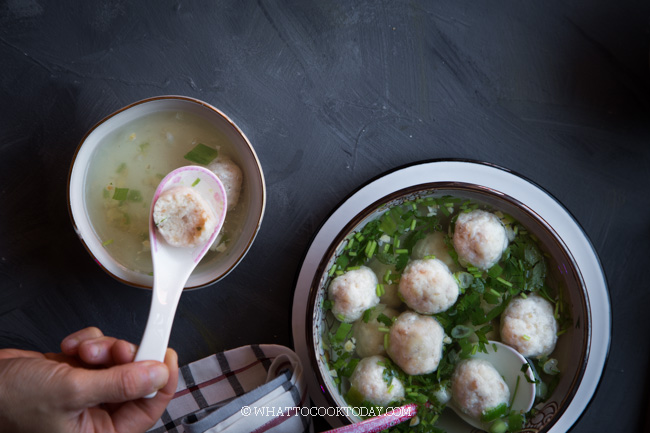 WHAT CUT OF CHICKEN TO USE FOR BAKSO AYAM ?

I use chicken breast because it is lean. You can use chicken thighs but it helps to trim off those extra fats for easier processing in the blender later.

Homemade bakso is really not difficult to make but you need to understand the process behind it because it is really the process that helps to contribute to that firm and springy texture.

Bakso can be used in many other Asian recipes like in this recipe I made them into meatball soup (kuah bakso ayam). Bakso can also be threaded to skewers and then grilled or deep-fried. They can be used to stir-fry with veggies such as this cap chay, rice, or noodles, or as toppings in noodle soup such as the Vietnamese pho bo noodle soup, or Indonesian mie sop 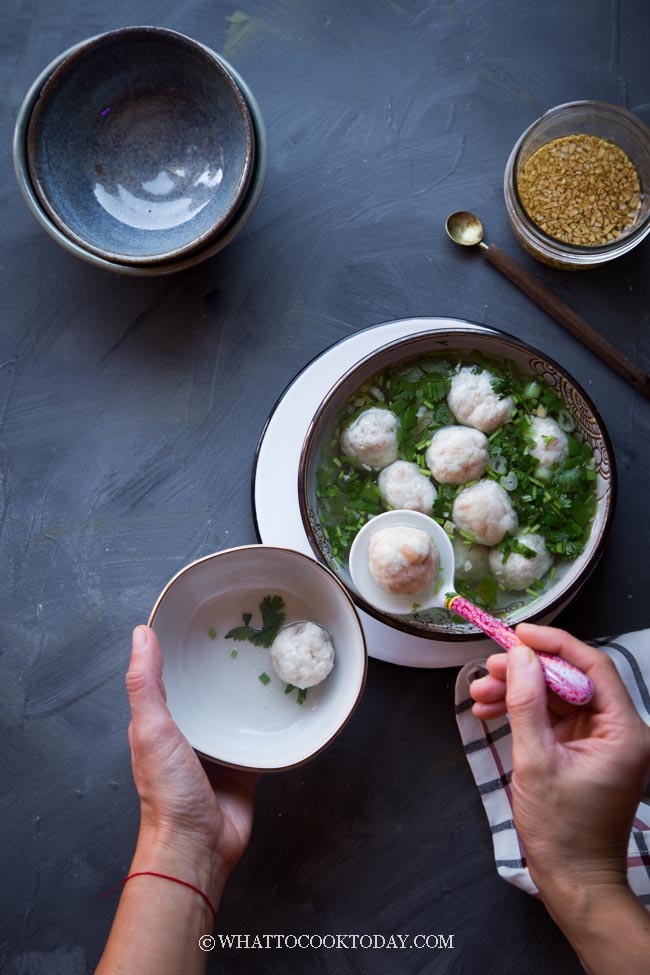 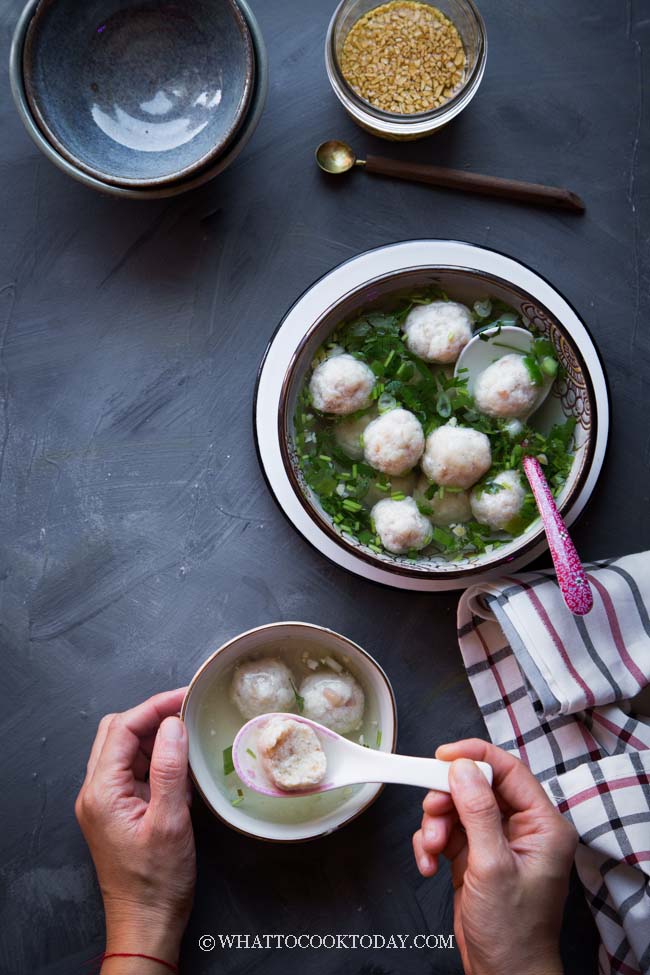 Do a taste test:

Ready to be used or store:

I adore meatballs too, in any form, origin doesn`t matter. And I loved any meatball soup I have ever tasted as well. I like this Indonesian style of meatballs and meatball soup.