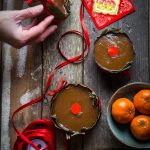 Learn how to make this traditional Chinese nian gao recipe with steamer, slow cooker, or Instant Pot pressure cooker. This recipe is so easy and no fuss.

Having some kue bakul or known as nian gao in Chinese around the house for lunar new year celebration is not unusual in our house and I know for many others too. Like I’ve mentioned before, lots of Chinese food carry auspicious meanings. The reason many people want to have nian gao for the lunar new year celebration because the word “Gao (糕) ” means cake, which has a similar pronunciation to Gao ((高), which means “tall” (a higher year). I think you can see what I’m trying to say here. Nian gao symbolizes a high year, an increase in prosperity 🙂 We simply call it “ti kue” in Hokkien, which means sweet cake.

WHAT’S THE STORY BEHIND NIAN GAO?

My mom told me one story behind the reason for having nian gao around during lunar new year. Most Chinese believe that the “Kitchen God” resides in every house. He will do “yearly report” on how each family is doing throughout the year. So, by offering the nian gao, the Kitchen God will have trouble saying too many things (not-so-good things we’ve done), because the mouth is full of pretty sticky rice cake 😉 I sure don’t mind a prosperous year and a good report from the Kitchen God. I thought that was a pretty entertaining story 🙂

Basic nian gao only needs 3 ingredients to make: glutinous rice flour (sticky rice/sweet rice flour), sugar, and water. This recipe is completely naturally gluten-free. The three are mixed together and then steamed until it’s cooked through.

Like I’ve mentioned above that you only need 3 ingredients to make nian gao. It’s pretty time-consuming to make it if you do it the traditional way by steaming. Over the years, I’ve tried to make them using a slow cooker and Instant pot pressure cooker. The two latter are pretty convenient as I don’t have to attend to the steamer and keep refilling water because I had to steam for 2.5-3 hours. I only need about 45 minutes of high-pressure cooking to make this nian gao. Pretty sweet eh? save lots of gas 🙂

SIZE OF ROUND PAN TO MAKE NIAN GAO

HOW TO STORE AND REHEAT NIAN GAO ?

Glutinous rice gives you a very filling sensation and no matter how big of an eater you are, let’s face it, no one can eat 2 to 3 large nian gao in one day (not a good idea to do so either!). Here’s what to do:
1. They can be stored at room temperature for up to one week. If it’s really humid where you are, probably 3 days max. After that, they can be kept in the refrigerator for up to 6 months
3. When ready to serve them just reheat them with a steamer or microwave if you want to eat them plain
4. If you are going to cook them with eggs, follow this Pan-fried Nian Gao with Egg recipe.

But another reason why I wanted to make this nian gao is simply because I want my kids to know about this tradition. Yes, they are 5 and 2 years old! A bit young to understand much, but my 5 year old described it as “squishy, mushy, and delicious” ha..ha…!! I don’t think they are mushy, but hey…I’ll take the delicious!

My mom usually cut some red paper to put on top of the nian gao and usually on fruits too. The Chinese love red for an important celebrations like Chinese New Year 🙂 You can put red dates/jujube in the middle of the cake too.

WHAT TO DO WITH LEFTOVER NIAN GAO

If you don’t want to do this traditional steamed nian gao, you MUST try this Baked Chinese New Year Sweet Nian Gao. So much easier and well-loved by my hubby and kiddos too.

*Recipe is written for 6-quart Instant Pot. Cooking time should remain the same for 8-quart size but will take longer to pressurize*

Size of pan you need:

Prepare the banana leaves (if using):

Cooling down and storing:

My apologies. Thought I had followed to the letter, but did not. I used the wrong type of rice flour. I will try again.

Hi JRR, you probably used the regular rice flour ? 🙂 I hope it turns out great for you next round 🙂

Tried the recipe using the Instant Pot. I followed the directions to the letter but the finished product was overcooked. Next time I will try steaming which will allow a little better opportunity for observation. Although being overcooked the taste was good and we enjoyed eating.

Thank you for sharing! Pressure cooking nian gao is so much more efficient in terms of energy, gas and water usage – I’m a convert and will never steam nian gao over a stovetop again! I ended up splitting the recipe into 2 6″ tins and cooked them in 2 different pressure cookers. I found it wasn’t quite the level of caramelization I liked at 45mins, so I cooked one for 1.5 hours, and another for 2.5 hours. The 2.5 hours was noticeably darker! I also added 4 knotted pandan leaves while making the brown sugar syrup and let it steep while cooling – it added quite a bit of fragrance to the batter, but I’m not sure if it will translate to the finished product.

Hi Priscilla, I know. Pressure cooker definitely more practical and convenient. Thank you for sharing your experience. Does your nian gao has nice pandan flavor?

I made this for my Teochew husband and he said it was tastier than the Nian gao he had growing up! I altered the recipe to cook it in a crockpot and it turned out perfect.

Hi Raycee, I’m so happy to know that it has your hubby’s approval 🙂 Crockpot is also a great way to cook this nian gao! Thank you for your feedback 🙂

15 Southeast Asian Food You Must Try Once In Your Lifetime